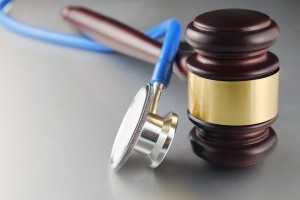 What Are Wrongful Death Cases in Maryland Worth in Settlement or Trial?

Jury Verdict Research also gives interesting data on the median verdicts in other jurisdictions: Florida – $1,257,386; New York – $1,100,000; Pennsylvania – $1,000,000; Ohio – $850,000; Indiana – $750,000; Missouri – $694,000; North Carolina – $500,000. Not all of this data is comparing exactly apples to apples because the range changed with the publication date, but I still think this provides an interesting means of comparison. These verdict figures – as opposed to settlement ones – are misleading because not all verdicts are collectible or at least not fully collectible, particularly today when so many states have caps on non-economic damages in medical malpractice cases. The National Practitioner Databank (NPD), a government reporting system for doctors and hospitals, reveals what is really collected in medical malpractice cases. This data bank has to report every payout (not the verdict amount, but the actual amount paid) in a malpractice case. NPD’s most recent annual report found that, nationwide, the average money damages recovered – by settlement or verdict – was $170,000. 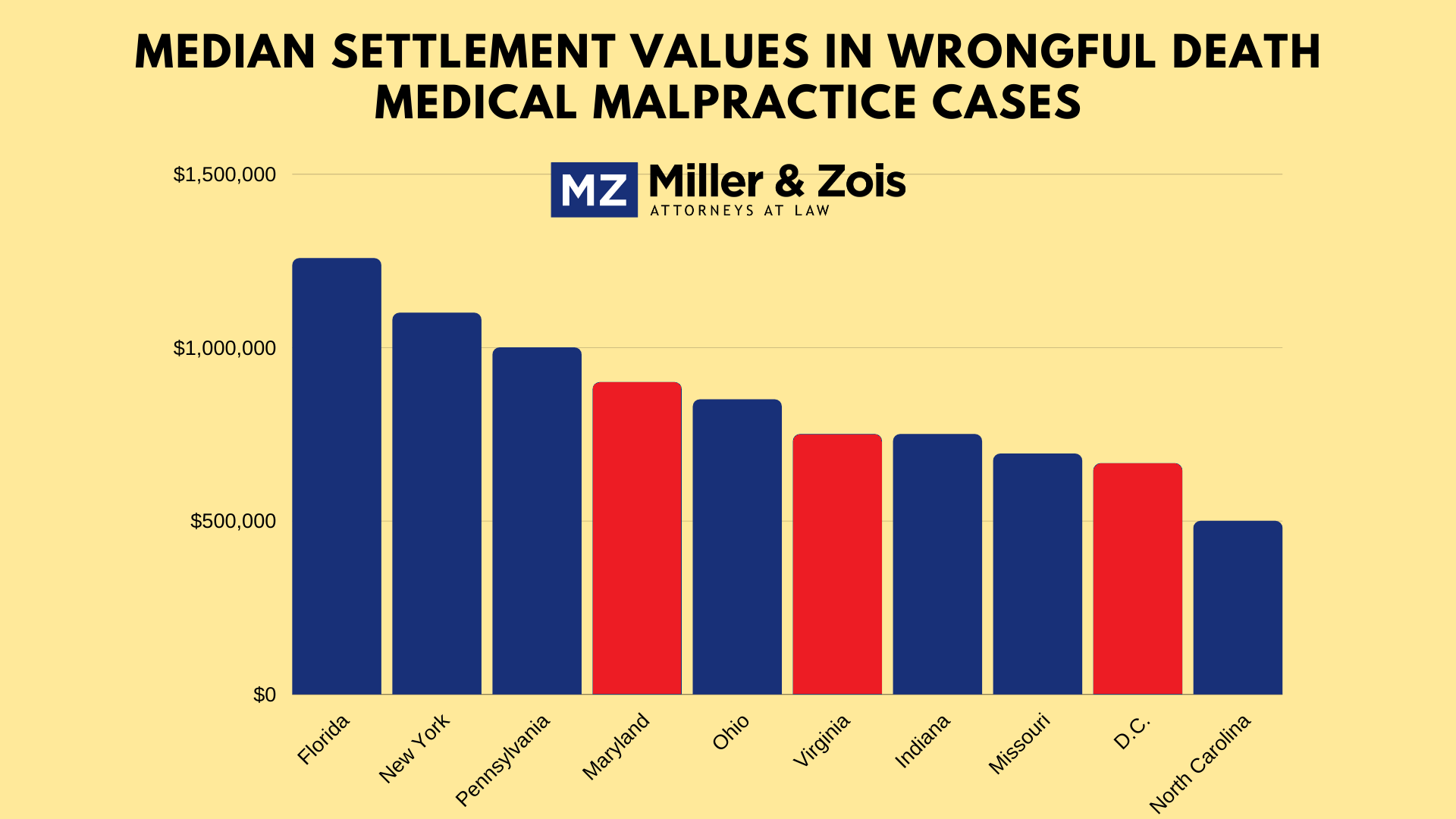 The biggest driving force of value in wrongful death medical malpractice cases in Maryland is our cap on non-economic damages in malpractice cases.  The maximum recovery for noneconomic damages in Maryland in 2017 is $981,250.  So if the victim was a child, on disability, retired or does not have a spouse or dependents,  the maximum value of those cases is typically the cap plus any medical bills.  You would not know this when you read the newspaper.  You hear about big verdicts in wrongful death medical malpractice cases — like our $10 million verdict in Baltimore last year — and you assume the victims’ families are getting all of that money.  But nothing could be farther from the truth.  Even the jurors are not told about the cap when they determine damages in these cases. The trial and settlement value of these cases can increase exponentially when the decedent had a spouse or minor children or other dependents. In those cases, the value is the lost wages of the victim.

The following are some examples of wrongful death medical malpractice verdicts and settlements:

A 65-year-old woman underwent a laparoscopy to find her ovarian cyst. During the procedure, the physician made an incision in the abdominal wall to access the abdominal cavity. However, he failed to complete it because there were adhesions around the area. Following the procedure, the woman suffered severe pain. The following day, the hospital staff discovered air in her abdomen. They also found toxicity and sepsis signs. The woman underwent an exploratory laparotomy. It revealed bowel perforations caused by the physician’s incisions. The woman subsequently experienced sepsis and multi-organ failure. She died the next day. Her husband alleged that the physician’s negligent performing of the laparoscopy caused her death. This case settled for $900,000.

A 66-year-old man died from stage IV liver cancer. His wife alleged that the physicians’ substandard care resulted in his death. She claimed they failed to timely diagnose and treat Hepatitis C and follow up on diagnostic tests that revealed liver mass. Her oncology expert testified that a timely cancer diagnosis would have increased her husband’s survival chances. This case settled for $1,400,000.

2020 – New York
A 43-year-old woman underwent a colectomy to remove a large polyp. During the procedure, the gastroenterologist negligently perforated her bowel. Following the procedure, the woman experienced severe pain. She went into septic shock and died several days later. Her husband alleged that the gastroenterologist’s negligence caused her death. He claimed he failed to timely order testing that would have revealed sepsis and inform his wife about the procedure’s risks. The jury ruled in the man’s favor and awarded $9,000,000.

2020 – Maryland
A neurosurgeon performed a discectomy on a 60-something man. During the procedure, he lacerated the man’s vertebral artery. This caused significant bleeding. The neurosurgeon paused the discectomy to stop it. Following the procedure, the man failed to regain consciousness. He died the next day. A brain MRI revealed that he suffered multiple strokes after the laceration. His son alleged that the surgeon’s improper surgical techniques caused the laceration that led to his death. The Baltimore City jury awarded him $840,000.

2019 – Maryland
A man was brought to the hospital after being involved in an ATV accident. He suffered fractures to his hip and wrist. Hospital staff fitted a right knee immobilizer, gave him crutches, and instructed him to remain flat foot to prevent further injury and displacement to his fractured hip. The man experienced severe wrist pain. Four days after the accident, he visited an orthopedic surgeon who diagnosed his wrist fracture and determined that his use of crutches put significant pressure on it. The man was fitted with a splint that limited his use of crutches. He was then referred to another orthopedic surgeon, who recommended wrist surgery to prevent arthritis. However, he failed to note the hip fracture and the man’s immobility from due to his wrist pain prevent him from using crutches. The morning of the scheduled surgery, the man’s wife found him dead. An autopsy found that the cause of death was a saddle embolism. His widow alleged that the orthopedic surgeon who recommended wrist surgery failed to note that he was at high risk for a saddle embolism because of his obesity, his age, his functional immobility, and his hip fracture. She claimed that he should have been put on anticoagulants. The Prince George’s County jury awarded a $1,918,400 verdict.

2019 – Maryland
A 56-year-old woman died from metastasized breast cancer. Four years before, she underwent a mammogram and ultrasound testing at Advanced Radiology. The radiologist interpreted the results as benign and normal. One year later, she was diagnosed with triple negative breast cancer. She underwent a mastectomy, chemotherapy, and radiation. However, she died three years later. Her estate sued the physician and Advanced Radiology for properly interpreting the deceased’s mammogram and ultrasound results, causing diagnosis and treatment delays. Advanced Radiology and their physician denied liability, contending that she would have died from breast cancer even if they diagnosed her after the mammogram and ultrasound testing. The Baltimore County jury ruled in favor of the estate and awarded $2,582,529.

2019 – Virginia
A 56-year-old woman died from metastasized breast cancer. Four years before, she underwent a mammogram and ultrasound testing at Advanced Radiology. The radiologist interpreted the results as benign and normal. One year later, she was diagnosed with triple negative breast cancer. She underwent a mastectomy, chemotherapy, and radiation. However, she died three years later. Her estate sued the physician and Advanced Radiology for properly interpreting the deceased’s mammogram and ultrasound results, causing diagnosis and treatment delays. Advanced Radiology and their physician denied liability, contending that she would have died from breast cancer even if they diagnosed her after the mammogram and ultrasound testing. The Baltimore County jury ruled in favor of the estate and awarded $2,582,529.

2019 – California
A 29-year-old woman died of breast cancer, which was alleged to result from a delayed diagnosis. She initially sought treatment for a lump in her left breast the year before. However, the treating facility allegedly failed to conduct a biopsy. With no treatment, the breast cancer progressed from Stage I to Stage IIIC. Her estate alleged that an earlier diagnosis would have prevented the cancer from rapidly advancing as it did. The parties agreed to an $800,000 settlement.

2019 – Alabama
A 20-year-old college student died from a pulmonary emboli after she visited Urgent Care twice within three days of her death. On her first visit, she complained of a sore throat, a cough, a headache, and shortness of breath. The doctor diagnosed her with bronchitis and pneumonia and prescribed her antibiotics. She returned to Urgent Care two days later, complaining of sharp chest pain and shortness of breath. Another treating doctor saw her, who diagnosed her with dyspnea and leukocytosis. He prescribed her an inhaler. The woman died the next day. Her estate alleged that both doctors failed to evaluate her for blood clots and failed to provide further testing and evaluation based on her shortness of breath. The jury awarded a $9,000,000 verdict.

2019 – Massachusetts
A 64-year-old man arrived at the emergency department, complaining of shortness of breath. Four weeks prior, he underwent surgery for a broken ankle. An ER nurse and the ER physician’s assistant examined him and noted his shortness of breath. Within three hours of arriving at the emergency room, he underwent a CT scan. Its results revealed a pulmonary embolism and a heart strain. Despite the results, he was not immediately treated. He eventually was administered heparin. However, instead of being admitted to the ICU, he was admitted to the general floor where he waited over four hours before being assigned a room. Once being placed, he went into cardiac arrest and died 50 minutes later. His estate sued the hospital for failing to timely treat the man. The hospital denied liability, claiming that the deceased showed no signs of a pulmonary embolism. Before trial, the case settled for $1,100,000.

2019 – Pennsylvania
A 77-year-old man died of a heart attack while under the care of a health care facility. One year before the heart attack, he showed hemiplegia and facial drooping to his right side while undergoing physical therapy for from third-degree burns to his right arm. His estate alleged that the facility failed to test and treat for a stroke. Two settlements were reached in this case. One of them amounted to $500,000, while the other amounted to $200,000.

2018 – Maryland
A 56-year-old nursing home resident died from cardiac arrest after choking on a large piece of his dinner. The man’s medical history included myotonic dystrophy, missing teeth, dysphagia, and swallowing difficulties. Right before he died, he received care and treatment from an internist from Five Star Physicians Services. His estate alleged that the physician failed to recommend a soft-food diet based on his pre-existing conditions and failed to provide adequate monitoring and supervision. The Baltimore County jury awarded the estate a $273,026 verdict.

2017 – Maryland
A man died of renal cell carcinoma after it spread to his lungs and bones. He was under the care of Advanced Radiology. His estate alleged that one of Advanced Radiology’s employees failed to properly read and interpret his chest, abdomen, and pelvis CT scans. They also alleged that they failed to identify masses on the man’s kidney. This caused delays in diagnosis and treatment. Advanced Radiology denied liability, contending that their employee properly read and interpreted the CT scans. The Baltimore County jury awarded $465,000.

2016 – Maryland
A 28-year-old man experienced a heart attack and died from atherosclerosis. Prior to his death, he consulted a cardiologist for his chest pain and shortness of breath. However, the cardiologist never found cardiac causes for them despite the man’s history of hypertension, living a sedentary lifestyle, and being a former smoker. The man’s estate alleged that he failed to perform a stress test and recognize the man’s overall medical history.  The cardiologist contended that his actions met the standard of care and that a stress test was unnecessary. A Baltimore County jury awarded the estate $3,921,000.

2012 – District of Columbia
A woman died of breast cancer that spread to her lungs. Her estate alleged that the Center Radiology-employed radiologist misinterpreted her mammogram results as benign, despite an abnormality in her right breast. Two years later, another mammogram revealed a mass in her breast, lesions in her lungs. She received a stage IV breast cancer diagnosis. The estate sued Center Radiology for failing to properly interpret her mammogram, failure to timely diagnose her breast cancer, and failure to timely order a diagnostic mammogram. A District of Columbia jury awarded a $500,114 verdict.

If you have a potential wrongful death claim in Maryland, call 800-553-8082 or get a free online consultation.  We have a long history of success in medical malpractice wrongful death cases.  We will fight with you to maximize the value of your case.