Breaking up with a client is something all personal injury attorneys do on a fairly regular basis. A lot of cases look promising.  But an investigation and review of the medical records can sometimes paint a very different picture.  This is particularly true in medical malpractice cases where the medical records read differently from what the patient remembers or believes.

For the most part, lawyers are free, as the client is, to sever the attorney-client relationship.  If you have already filed a lawsuit for the client, things are a bit more complicated because you will need to get court permission before withdrawing from the case.  Before a case is actually filed, however, breaking up is a lot easier.

[u]pon termination of representation, an attorney shall take steps to the extent reasonably practicable to protect a client’s interests, such as giving reasonable notice to the client, allowing time for employment of another attorney[.]

An Approaching Statute of Limitations 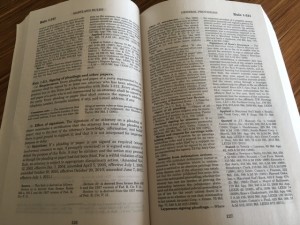 The answer to this question turns on interpreting what constitutes “reasonable notice” to the client so as to avoid “adverse effect on the interests of client” under Rule 19-301.16(d).

Unfortunately, there is no Maryland case law that directly answers this question. It seems safe to say that breaking up with a client at the last minute will probably not get you suspended or disbarred (absent additional circumstances). No Maryland attorney has ever been formally sanctioned for terminating or withdrawing “too late” when the client was actually notified of the withdraw.

It is more likely that a last-minute break up might lead to a legal malpractice claim. But there are also no reported Maryland cases discussing 11th-hour client breakups in the context of legal malpractice. However, Maryland’s Rule on terminating representation of a client is based on the ABA Model Rules of Professional Conduct. This means case law from other jurisdictions that have adopted the same version of the ABA model rule has persuasive authority.

A review of the cases from other states that have the same version of the ABA model rule as Maryland on this issue suggests that there is no time period when it becomes “too late” to dump a client before their claim expires.

One clear them from the cases on this subject is that “how” is more important than “when” in the context of last-minute client breakups.  In other words, the nature and circumstances of how you break up with the client are probably more important than the timing of when the breakup occurs.

For example, terminating a client with a one-sentence text message and then ignoring their calls and emails is probably not going to be considered “reasonable” even if you do it 1 year before their SOL expires. By contrast, you can probably break up with a client weeks before their deadline if you notify them in person and make a good faith effort to help them find another attorney right away.

Case Law in Other Jurisdictions

Below is a brief summary of the most relevant cases on the issue of attorney’s terminating clients prior to the expiration of their limitations deadline: