Clearly, the new Republican tradition is to pay homage to Ronald Reagan whenever you have a segue to do so – and even when there’s not. Everyone has forgotten Iran-Contra and those Marines in Lebanon. Instead, we have focused on the fact that he presided over 8 years of relative peace and prosperity. Most people also agree he made a real contribution to our victory in the Cold War.

At a debate back for the RNC Chairmanship, Grover Norquist asked the candidates, “Who is your favorite Republican president?” Every 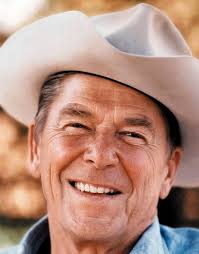 one of the six candidates picked Reagan.

Poor Lincoln. Even Democrats look back on Reagan and point out – maybe correctly, I don’t know – that Reagan is not conservative enough to win the Republican nomination in 2016. (Of course, in 2018, the cult of Donald Trump has led to a devaluation of Reagan and his legacy.  But this is likely a very temporary revision.)

You have heard of Stella Liebeck and the McDonald’s coffee case. Yep, over 30 years later, that is still a thing. But before Stella, there was “the phone booth case” that Reagan raised in a 1986 speech:

A man was using a public telephone booth to place a call. An alleged drunk driver careened down the street, lost control of her car, and crashed into the phone booth. Now, it’s no surprise that the injured man sued. But you might be startled to hear whom he sued: the telephone company and associated firms.

All of this is true. People love to make a big deal about someone suing someone as a harbinger for chaos because the lawsuit is so unjust.  But all you need to file a lawsuit is 115 bucks (at least in Maryland).  People file utterly ridiculous lawsuits all the time.  In this case, the guy was paralyzed, and he brought suit and the phone company settled (for like $25,000 in a catastrophic injury case.)

I don’t know why insanity is imputed because some company does not have the guts to take a case to trial.  But everyone jumped on to the idea that there is great meaning to the court’s failure to rule for the defendant on its motion for summary judgment (edit: the trial judge granted the MSJ but the California Supreme Court flipped the order).   But I guess Reagan was pretty fired up about it in his speech, so that is why the legend lives on to this day that Reagan was pro-tort reform.

A Closer Look at Reagan and Tort Reform

I found on my Google +1 a post (update — Google +1 is dead) from someone who worked for Reagan, which looks at what he actually said about tort reform. Apparently, all of his years of public life, Reagan gave only one tort reform speech in his political career in which he specifically said the issue is one for individual states. He never followed up on this speech.

Throughout history, people have used what dead greats believed or would have believed to their political advantage. While I might strongly disagree, you can make a cogent argument for tort reform. People smarter than me support it. But arguing tort reform was anything other than a minor issue to Ronald Reagan is just plain wrong.  His speaking out against the Stella Liebeck verdict is just not enough evidence to run with on where he stood on tort reform and, more importantly, whether the federal government should intervene in states’ rights.  Even in 2018, there is little inertia for the idea of this kind of intrusion into what has long been the domain of the states.

(Please note: After reading this post, it is important to note – I don’t personally know anyone who claims Reagan supported tort reform. So maybe I’m setting up a straw man. I hate it when anyone other than me does that. But the larger point is that tort reformers are not climbing on the backs of the greats of the past. I can’t even find anything on Barry Goldwater and tort reform, for crying out loud. But, again, because there is an overwhelming tendency of people to claim that dead people agreed with them, it is worth clarifying that anyone claiming that Reagan supported federal intervention into what is clearly the right of individual states is misstating his record.)