Our law firm has handled a lot of vertebrae fractures in car, motorcycle, and truck accident cases over the last 20 years.  A vertebrae fracture can be a serious, significant, and permanent injury to the musculoskeletal system. You wouldn’t wish this fracture on anyone.

What is the Settlement Value of a Vertebrae Fracture Case?

One study found that the national median award at trial in personal injury cases for a vertebra fracture is $112,537.  The median award for multiple vertebrae fractures is almost double the single vertebra amount, $207,000.

In fact, I assumed these vertebral fracture numbers were low because these compensation statistics excluded cases where there was a spinal cord or head injury. But apparently, 7.5% of the verdicts were in excess of $2,500,000.  This likely means they included vertebrae fractures where the spinal cord was implicated, or there was an accompanying head injury.

Almost two-thirds of the cases in the study were motor vehicle accidents, which is the leading cause of spinal injuries in this country.  In my law practice, I would say that 90% of our vertebral injuries were from motor vehicle crashes.

Here are some sample jury payouts and settlement amounts for vertebrae injuries over the last four years from around the country.  I’ve added as many cases in Maryland as I could find.  Many of our cases involved strict confidentiality clauses, unfortunately.

Remember, sample settlements and compensation awards alone tell you little about the settlement value of your claim. But used with other resources, it helps you to appreciate the most likely range of outcomes for your claim. 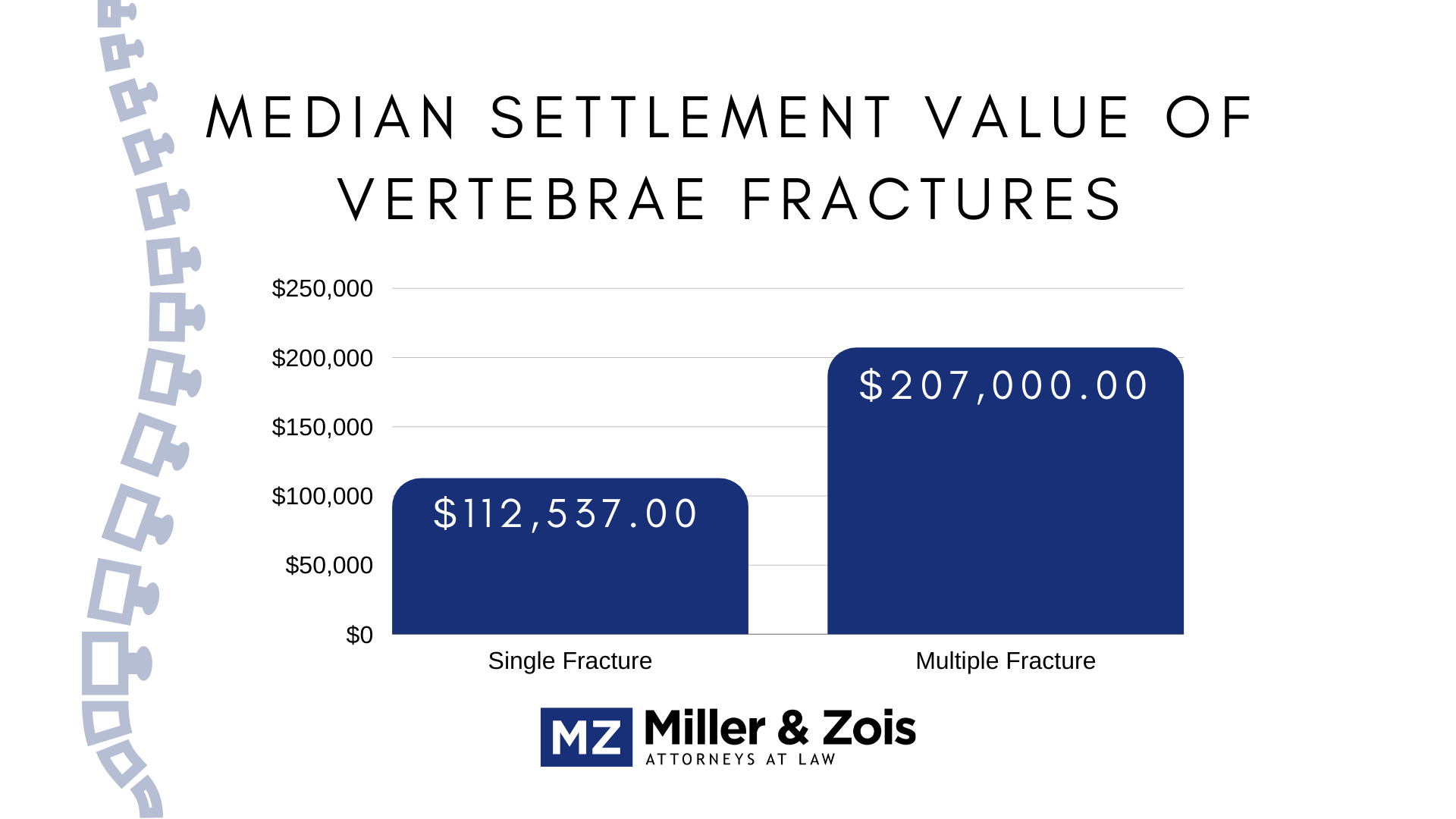 This case report looked at a 22-year-old man who suffered thoracic vertebrae fractures from low-voltage electric shock. The researchers found that he suffered T2-6 fractures. He used a cervicothoracic support corset for treatment. Following rehabilitation, he regained spinal mobility with no back pain. The researchers concluded that clinicians should consider vertebral fractures in electric shock cases, especially if the patient experiences pain and limited spinal mobility.

This study looked at the abdominal injury incidence and severity in blunt trauma patients with thoracic vertebrae fractures. The researchers found that thoracic vertebrae fracture patients two to three times more likely to suffer intraabdominal organ injuries. They found that the most commonly injured organs were the spleen, liver, and kidney. The researchers concluded that clinicians should always consider intraabdominal injuries in thoracic spine fracture cases.

This study found that a structured hierarchical segmentation method that combined the level-set method with two deep-learning methods accurately identified each lumbar vertebra and its segmentation.

A burst fracture is one of the most challenging vertebra injuries we see.  These are most commonly seen at L1 or T9-L5.   A burst fracture is a serious injury in which the vertebral body appears to have exploded. The burst injury mechanism involves the failure of the end-plate causing the nucleus to force into the vertebra, causing it to burst with an outward displacement of fragments. The bone is compressed and splintered.  It is created by a load or a force being applied to the spine which causes the bone to compress and then expand, causing the bone to be propelled back into the spinal cord.  It is usually an awful injury that causes severe pain and bleeding, leaving the victim unable to walk immediately after the injury.  This injury often requires immediate neurosurgery.  Burst fractures will typically have higher average settlements than other compression fracture cases.

With a crush fracture, instead of a bone-breaking across, you can see a sharp line representing the break in the bone continuity.  The bone just collapses, as if crushed from pressure.  This injury sounds awful. But it is usually a mechanically stable fracture unlikely to undergo more changes that could lead to a greater injury.  This spinal fracture is more common in elderly patients, but you also see crush fractures in motor vehicle accidents.

A wedge fracture is the most common compression fracture.  It reduces the height of the anterior portion of the vertebral body.  Basically, the upper and lower surfaces just rotate downwards and compress the anterior portion.  The impacted vertebra looks like a wedge, thus the name.

Getting a Vertabae Fracture Lawyer

Our personal injury attorneys are in Maryland.  Our firm handles these kinds of cases all over the country.  My number is at the top of the page.  You can call me or fill out a contact form.  We will do everything we can to help you and, if you hire us, to maximize the value of your claim.  If you are outside of Maryland, we work with great co-counsel around the court in these cases.  You can find us at 800-553-8082.