Our lawyers have handled scores of car accident and product liability cases where the injury is an amputation or serious injury to the victim’s toe or toes.

This page is about the settlement compensation payouts in toe injury and amputation cases and the issues that are presented in these injury claims.  This page was last updated on August 18, 2021.

How much is a toe worth?

The median for foot injuries makes sense to me. I’m stunned that the average verdict for an amputated toe is as low as it is. Remember that unless this is a lawnmower case, it is likely that the plaintiff suffered other injuries.  I certainly value my 10 toes more than American juries value someone else’s toes.

What happens if you lose your big toe?

The loss of a big toe is significant because it plays a critical role in foot biomechanics.  It supports around 40 percent of your body weight. This makes walking after a big toe amputation extremely difficult. You may also experience phantom pain. A Diabetics Care-published study found that a big toe amputation “significantly altered” diabetic patients’ foot pressure distribution. The researchers also found that this alteration increased the reamputation risk. You will initially experience significant difficulties after losing your big toe.

However, you may eventually lead a fairly normal life without a big toe. To achieve this, you would have to make several adjustments to how you walk or run. As a result, your gait will be slower, choppier, and inefficient. (Because of this, losing your big toe disqualifies you from military service.) 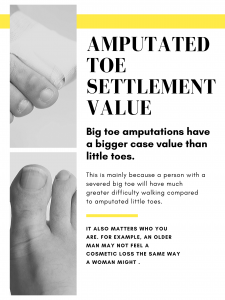 What happens if you lose your pinky toe?

Losing your pinky toe is not as big of a deal compared to other toes. That statement does not minimize the pain and suffering that comes with losing that toe.

We have pinky toes because our primate ancestors used their feet to grab and climb onto trees. However, our feet help us stand. They comprise 26 bones. The most important of these are the metatarsals, which are comparable to our knuckles. Losing your fifth metatarsal makes running and walking difficult.

Losing any toe, regardless of size, still has negative effects. It can affect your mental health and hurt your body image. Having toes removed due to diabetes has serious consequences. In a study published in the Journal of Diabetes and its Complications, researchers concluded toe amputations are “a significant predictor of future limb loss” in diabetics.

Below are some sample verdicts and settlements in amputated toe cases.

Do not “over-learn” the lessons from these cases.  It is very tough to mix and match your case with other cases because the facts, jurisdiction, lawyers, and parties are different.  So you can read a case here that sounds exactly like yours but it still tells you little about how much your toe injury is worth? It is not like yours at all in terms of value (one way or the other).

That said, along with other evaluation tools, these results are instructive in learning more about the settlement amount range of particular cases. Keep in mind that if an accident is severe enough to lose a toe, there were probably other injuries involved.  The hard part is thin-slicing out how much of the verdict or settlement value should be attributed to the toe. 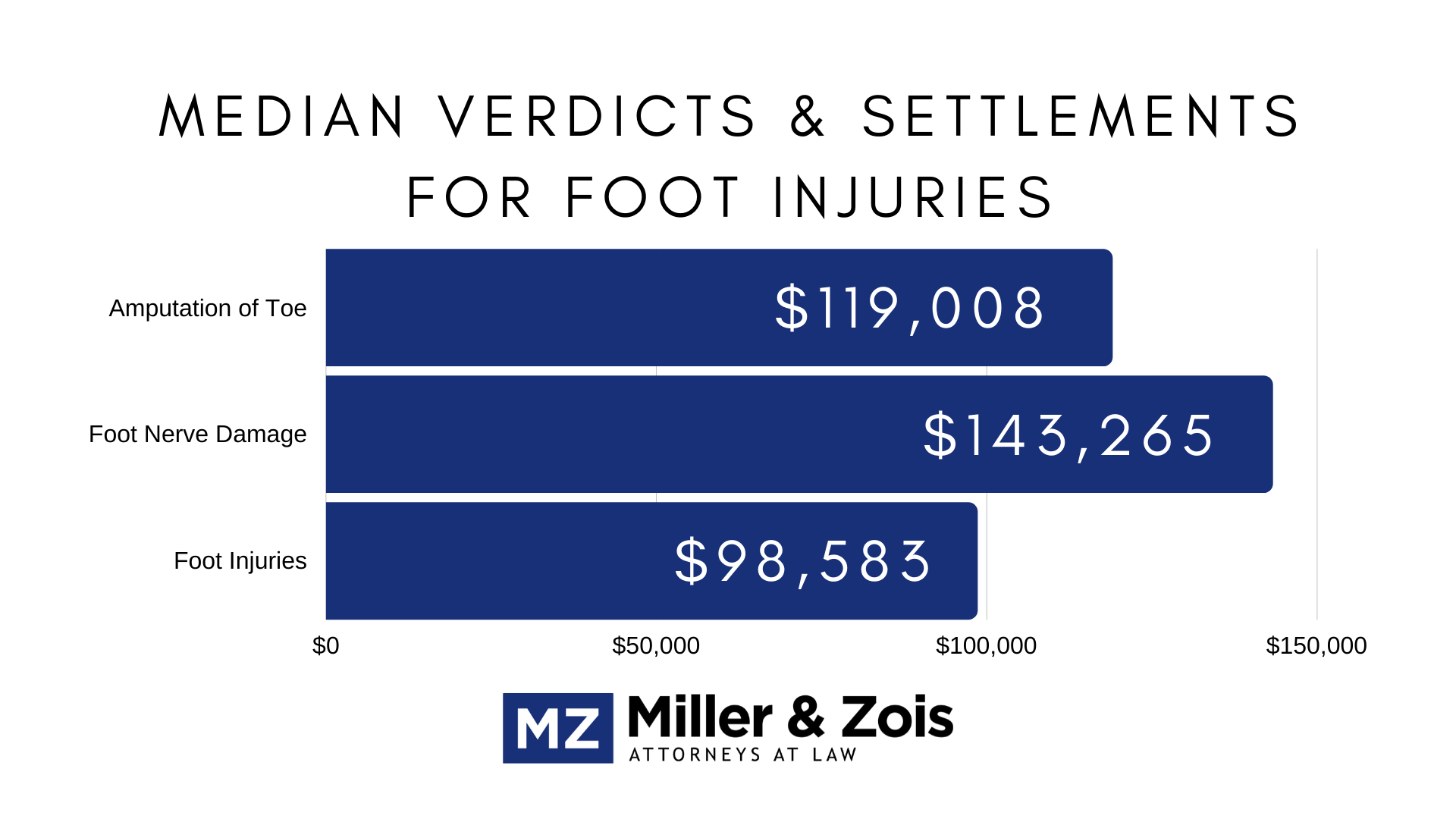 Getting  a Lawyer for Your Toe Amputation Case

Our law firm handles serious amputation personal injury accidents and medical malpractice cases in Maryland.  If you need a lawyer, turn to one with the experience and resources to maximize the value of your claim.  Call Ron Miller at 800-553-8082 or get a free online consultation and case evaluation.