In this post, we will explain the driving factors that give birth injury cases such high values. We will also look at sample settlements and verdicts from actual birth injury cases around the country to illustrate how these factors actually work. 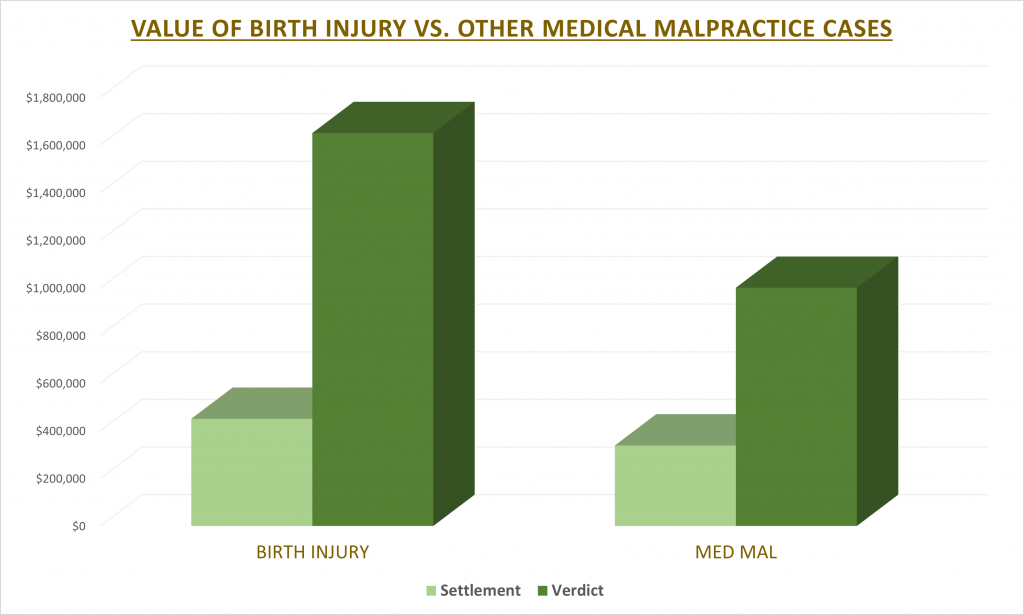 These averages are based on national verdicts and reported settlements from all 50 states. The average values for both birth injury cases and general med mal cases are often higher or lower in certain states. In Maryland, the average value of medical malpractice cases is significantly higher than the national average.

What Drives the Settlement Value of Birth Injury Cases?

There are two primary factors that combine to drive up the settlement value in birth injury cases and give them the highest potential value of all malpractice claims: (1) the severity of the injuries involved; and (2) the scope of economic damages.

One of the main reasons that birth injury cases have such a high average value is that these cases often involve some of the most devastating types of injuries. Neurologic birth injuries such as HIE can leave a child with major life-long disabilities such as cerebral palsy.

Children born with severe types of cerebral palsy are often unable to walk and will require a wheelchair or mobility aid for the rest of their life. They may also be unable to perform basic functions such as feeding or getting dressed. Children with serve cerebral palsy like this will often require daily medical care and assistance from the day they are born and throughout their adult life.

Birth injuries cases often have a very high potential value because they involve a lifetime of economic damages which are not subject to maximum caps like non-economic damages (e.g., pain & suffering). Economic damages in a malpractice case include the cost of both past and future medical treatment related to the injury and future lost income (or loss of future earning capacity).

In a typical medical malpractice case, economic damages can be somewhat limited. If a 60-year-old plaintiff can never work again they are only losing 5 years of lost income. By contrast, birth injury cases frequently present a seemingly unlimited potential for future economic damages. Birth injuries like cerebral palsy may require a lifetime of future medical care and 45 years’ worth of lost future earning capacity. The lost future earnings capacity alone can add up to several million.

In recent years, Maryland and many other states have responded to complaints about excessive medical malpractice awards by enacting laws that put maximum caps on the amount of damages that can be awarded in these cases. These caps usually only apply to pain & suffering damages (i.e., non-economic damages). Most states, Maryland included, do not have any maximum caps on economic damages. Since birth injury cases tend to be very heavy on economic damages this tends to drive up their potential value considerably.

Cerebral palsy is general the result of oxygen deprivation during childbirth. Severe cerebral palsy can be one of the most serious types of birth injuries and these are often high-value cases.

Erb’s palsy is caused by injury to nerves in the baby’s shoulder and neck during delivery which results in some level of paralysis in the arm. Compared to things like cerebral palsy and brain damage, Erb’s palsy is one of the less serious types of birth injuries, and these cases are therefore at the lower end of the value spectrum.

HIE is a very serious and potentially deadly type of birth injury that can leave a baby with permanent brain damage. HIE often results in sever cases of cerebral palsy and other major disabilities and it is a leading cause of neonatal fatalities. These are high value birth injury cases.