We frequently get letters and phone calls from prisoners. It is hard not to discount these cases. It is not just the “People in Jail Are Less Likely to Be Credible” problem. It is also the “People Who Have Tons of Time on Their Hands Tend Chase Windmills” problem that is demonstrated by the 10 page letters that incarcerated people send to lawyers setting forth their grievances.

This bias leads lawyers to miss a lot of cases that are both lucrative and serve the interests of justice – Because we criminally mistreat our prisoners. But, because you have to kiss so many frogs to find a princess with prisoners, most lawyers just ignore the cases. We are probably guilty as charged on this one.

In fact, the only prisoner cases we have taken are cases where prisoners working on a road crew were hit by a prison owned or, better yet, a third party vehicle. Those are the facts of Goss v. Jennings, a “pedestrian” wrongful death case decided by the Maryland Court of Special Appeals last week. 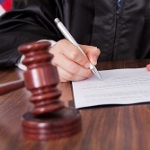 While working on a litter pickup detail on the Capital Beltway (I-495) in Landover in Prince George’s County, a man was struck and killed by a dump truck. The plaintiffs filed a wrongful death/survival action against the driver, the Department of Corrections, and the Maryland State Highway Administration. The jury then returned a verdict against both the dump truck driver and the state of $2,025,000: $350,000 for the survival action and $1.675 million for the wrongful death action. Pursuant to the cap on non-economic damages, the trial court reduced the wrongful death awards to 150% of the wrongful death cap in 2007 of $680,000 ($1,020,000).

The state got out on a motion after the verdict, which was fine with plaintiffs because they had a defendant with insurance coverage and didn’t need to deal with the $200,000 cap. The truck driver and trucking company appealed. They made several accident specific arguments that were not interesting for our purposes. They also argued that the trial court erroneously imposed two statutory caps when only one cap applied.

In what can only be described as a tragic overreaction to a trumped up malpractice “crisis” almost 10 years ago, this sadly is the law. Now a creative or overreaching (you pick) defense lawyer tried to extend this over to non-malpractice cases, arguing that the language in § 11-108(b)(3) of the Courts and Judicial Proceedings Article dictates a statutory cap in non-malpractice cases. The court shoots this argument down pretty quickly:

Such a contention does violence to the text of the statute. Because the 1994 legislation did not erase the distinction between the two causes of action to reach Goss’ proffered solution, we would have to somehow merge both paragraphs of § 11-108(b)(3), contrary to the intention of the Legislature and applicable caselaw. Each paragraph of § 11-108(b)(3) stands alone, with a survival action falling under paragraph (i) and a wrongful death action being confined to paragraph (ii). Although paragraph (i) deals with multiple claimants in a personal injury case, it has no impact here because no “direct victim” is suing along with a derivative party. There is and could only be one plaintiff in the survival action – – [decedent’s] personal representative.

Is this an important case? The quick answer is no because this case tells us what everyone knew all along: there are two caps in non-medical malpractice cases. The language says what it says. We can all read.

Still, I’m glad to see this case because defense lawyers often raise this argument in mediation that really, there is one cap. Half the time, you get a mediator who wants to take the argument seriously and you spend time on the defensive arguing the manifestly obvious. I never really knew what to say except, “C’mon, read the plain language,” and “Look at all of these verdicts that applied two caps.”

Last night, I watched Jesse Ventura argue on Piers Morgan show on CNN that the 9/11 attacks were an inside job. Unbelievably, Morgan lost the argument. Because you just can’t win an argument with crazy. I felt the same way about the one cap in non-malpractice case arguments. Now, at least we have a case that makes the obvious plain.