Last week, the Maryland Court of Special Appeals upheld a small verdict in a truck accident case. The issue was the exclusion evidence of the defendant fleeing the scene after a car accident, even though plaintiffs put on a good case that the act of fleeing itself caused the plaintiff’s injury. I understand the logic of the holding and understand how the court found as it did. But I disagree with the ruling.

Here are the facts is Alban v. Fiels. The plain 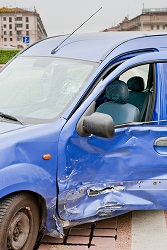 tiffs, a married couple in their 70s, were injured when their truck collided with another truck in Baltimore County. After the accident, the defendant briefly returned to the scene and then fled. Witnesses said that the defendant laughed as he drove off. That sounds so crazy, I know. But that is what the opinion said. I’m picturing Jack Nicholson in his Joker prime.

The insurance defense lawyers wisely did not dispute liability. The case went to trial for compensatory damages. The trial court granted the female plaintiff $5,000 in non-economic damages and $5,000 to the couple for their joint claim of loss of consortium. The entire award was $10,000 plus costs. I don’t know what the underlying medical and injuries were, but if you are getting a $10,000 verdict in a jury trial, things didn’t go well.

The plaintiffs’ appeal was based on the inability to get in the “fleeing the scene” evidence. Their attorney argued that it was an error to exclude the testimony of accident witnesses and the plaintiff’s psychologist because emotional damages were part of the original complaint. Plaintiff said that her PTSD stemmed from the moments after the accident when the defendant returned to the scene. She testified that she feared they would be killed while they were trapped in the vehicle. Plaintiff said that she has had ongoing anxiety problems and has suffered from prolonged bouts of crying and sleeplessness since the accident. Plaintiff’s physician testified that she was permanently disabled with post-traumatic anxiety.

This is a good test case for admitting this evidence. Often plaintiffs’ accident lawyers just want to get this kind of evidence in order to inflame the jury to hate – appropriately – the defendant. Here, the plaintiffs at least arguably were really hurt by defendant fleeing the scene and it really – at least allegedly, is hard to read these things and know – caused harm. We have plaintiffs in their seventies… it is not a stretch by any means. The trial court stuck to the usual playbook and excluded evidence of the defendant’s post-accident conduct because of its prejudicial nature.The Court of Special Appeals entertained two arguments in this appeal. First, did the trial court err in excluding testimony by witnesses they told the plaintiff, while she was still in her truck, that defendant had fled the scene, returned, and laughed while driving away. Second, was it correct to exclude the testimony of the plaintiff’s physician regarding her emotional injury?

Ultimately, the Plaintiffs are seeking to admit evidence of conduct after the cars collided. In Maryland, there is not an independent tort of negligent infliction of emotional distress. A plaintiff may recover for emotional distress arising out of tortious conduct, not as an independent tort, but as an element of the overall tort damages. Plaintiff argued that because she was told what the defendant was doing while she was still trapped in her vehicle and that caused her fear, she was entitled to additional compensation.

I mean, it if caused real harm, and it gets past the “lawyer is just trying to backdoor in inflammatory evidence” I can’t see why it is not admissible.  The Court of Special Appeals, in an opinion by retired Judge James E. Eyler, affirmed the trial court’s exclusions and upheld the decision. The CSA found there was no abuse of discretion and that admitting the evidence would have been unduly prejudicial.

I understand why the court ruled as it did, and I understand the purpose of the law. Annoyingly, drunk drivers use this safe harbor every day in personal injury cases. As much as I hate it, I understand its application in most cases. (Or at least I have grown to accept it.) But if the defendant’s bad conduct causes harm – meaningful harm as determined by the trial judge – I can’t see why we don’t let the jury hear and consider the evidence. To me, that should be the test and the rule.