Reams of studies on the relationship between driver fatigue and big rig truck accidents are just a Google click away. No one has seriously disputed this premise since federal regulators first limited commercial truck driver road time in 1940.

Accordingly, truck drivers have long been required to record driving and sleeping times. Drivers must keep the logs for seven days and then pass them along to the trucking company or whoever employs the driver for six months.

A truck driver’s logs are fodder for plaintiffs’ attorneys because they show excessive driving or, more likely, they don’t exist. Truck drivers notoriously doctor trucking logs either to show less driving time or to cover up their fatigue after a truck accident.

After playing with the idea for six years, in 2010, the Feds pushed harder to get trucking companies to use Electronic On-Board Recorders for Hours-of-Service Compliance or EOBRs. EOBRs are synchronized with the truck’s engine and linked to the driver’s cell phone, providing information on the truck’s 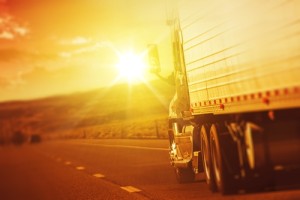 registration number and location; whether the driver is driving and on-duty, is off duty, or is in the truck’s sleeping section, and so forth. There is a little Big Brother narrative to run with here. Then again, these guys are driving death machines that endanger our children. I don’t know about you, but I’m willing to make the trade.

You would think this would not be controversial. Companies that could not comply with the rule had a 40 percent higher truck crash rate than the general motor carrier population. Just an incredible statistic, right?

Of course, the bad trucking companies who can’t keep their trucking logs straight without violations objected to the rule. Naturally. So they sued to prevent the enforcement of the rule, which will not go into effect until next year.

They listed a host of reasons why they thought the rule should not be enacted. The 7th Circuit agreed. Why? Incredibly, they successfully argued that the regulation is arbitrary and capricious because it does not “ensure that the devices are not used to harass vehicle operators.” Come again? They didn’t consider whether the devices were used to harass vehicle operators? Would they pass a law they thought harassed truckers? If they would, would they admit to it? It is insane.

But sometimes, we pass insane laws. The law that allows the FMCSA to make this rule – the Truck and Bus Safety and Regulatory Reform Act – requires the feds to consider before passing the rule whether the use of monitoring technology would harass drivers. Why can’t we assume that is just the result of some silly compromise language in the statute that I’m sure no one ever thought would matter?

So what happens now? The FMCSA has to write that it considered whether the rule will harass trucking companies. Really, what are the odds it says, “Yeah, come to think of it, our whole purpose was not to save lives in truck crashes but to harass trucking companies.” What a waste of time, effort, and energy for everybody. I don’t blame the 7th Circuit, I blame whoever wrote this statute.

One irony in the battle the trucking companies are waging here: truck drivers like the monitoring.