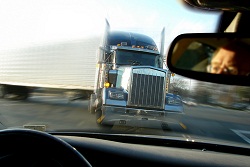 A new appellate opinion offers some interesting insight into the parameters under which a plaintiff may inquire about a truck driver’s driving record and the extent to which plaintiffs’ truck accident attorneys can use cross-examination fodder like the commercial driver license manual and other safety manuals.

Fact of the Case

Briefly, a man on a bicycle was killed when he was hit by a truck.  The bicyclist was making a right turn against a red light on a white pedestrian signal.  The truck hit him, and he was dragged for several hundred feet.

Heartbreakingly, the man had 11 kids.  I settled a wrongful death case last month in a case where a man had 9 kids and a wife that did not work.  I looked at that picture of his family more than once.  Just awful.

The jury awarded $2.55 million and apportioned 20 percent of the fault to the trucking company, 50% to the driver, and 30% to the deceased bicyclist.  (Unlike Maryland law, Michigan apportions liability and has comparative negligence.) Interestingly, they awarded $2 million for the pain and suffering and $550,000 for the loss of companionship.  He had 11 kids.  Try making sense of that.  The take-home message beside the shock of the survivors’ loss award is that juries will pay a great deal of money for a small duration of awful pain and suffering when someone is killed.

The trucking company and the truck driver argued on appeal that a plaintiff should not be able to pursue a claim of negligent entrustment when vicarious liability is admitted.

If this was a car accident case, you cannot admit into evidence the defendant driver’s driving record.  The plaintiffs’ counsel backdoors this in a truck driving case or any claim where owner and driver are not the same person by making a claim of negligent entrustment or negligent supervision.  We settled a truck accident case last year in Prince George’s County with iffy liability for great value because, while it was a he said/she said case, the jury would know that that driver never should have been on the road driving a weapon of destruction that is an 18 wheel truck.

Certainly, Defendants would have a point here if they stipulated to liability.  But they blamed the decedent for the accident. So it is fair game whether they hiring someone that they shouldn’t.

The Defendants next argued error in allowing the plaintiff’s counsel to refer to a commercial driver’s license (CDL) manual and the JJ Keller safety manual during both opening statements and during the questioning of the Defendants under the theory that these are not evidence of the standard of care.  Specifically, they alleged that such inquiry violated Michigan Rule of Evidence 707:

To the extent called to the attention of an expert witness upon cross-examination, statements contained in published treatises, periodicals, or pamphlets on a subject of history, medicine, or other science or art, established as a reliable authority by the testimony or admission of the witness or by other expert testimony or by judicial notice, are admissible for impeachment purposes only.  If admitted, the statements may be read into evidence but may not be received as exhibits.

The hole in this argument is not hard to miss, right?  This has nothing to do with expert testimony.  The Defendants also did not make much of an argument that these safety manuals do not inform the standard of care.

If you are a truck accident lawyer and you think you may have a dispute of liability, you really want to take a long look at the driver’s record, the logs that show how much that trucker has been on the road, maintenance records, and anything else that might provide a lens to why that company should not have hired that driver or that the driver of the truck should not have been on the road when the accident occurred.