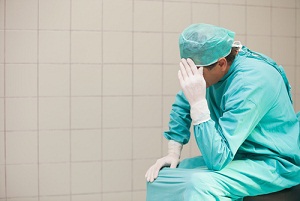 One of the great selling points of caps in medical malpractice cases is that it encourages doctors to come to your state to practice.  Every state, particularly in jurisdictions with rural areas where access and availability to doctors is a prominent concern, want to attract a healthy supply of doctors to their state.  The thinking it is that doctors will flee to states where the litigation climate is more favorable to doctors.   A new study suggests this oft cited canard support tort reform is 100% true.  But not in a good way for patients.

A Notre Dame economist published a study titled “Medical Malpractice Reform, the Supply of Physicians, and Adverse Selection,” Journal of Law and Economics” that found that “when a county’s neighboring state passes a cap on noneconomic damages, the supply of physicians falls by 4 percent” in that county.”   Tort reform advocates are nodding their heads vigorously.

But here is the kicker: it also causes that statewide malpractice rate to also fall by 4%.   Why?  One theory is that higher-risk specialty physicians are the ones leaving the state.  But the authors can find no evidence to support this conclusion.  So the question is who are these doctors who are leaving the state.  Think about it.  What kind of doctor flees a state because he fears malpractice claims?   Go back and think of any doctor who has treated you over the course of your life that you thought was amazing.  I can think quickly of four.   None of these four would think about malpractice as anything other than a fleeting thought.  I’m sure they have opinions and they might not mirror mine.  But I’m sure that malpractice claims is not in the top 10 list of things they worry about in their practice.  Because they are really good at what they do.

Now compare that to a doctor who uproots themselves for the sole purpose of going into a jurisdiction where they are less likely to get hit with a medical malpractice claim.  Keep in mind this is almost invariably — for anyone you would want treating you — an insured event.  Consider the logistics and cost of picking up your family and your most likely not so thriving practice to go to another state.  Compare this doctor with the one you admired and trusted so.

So the answer, this study concludes, is that doctors that are prone to committing malpractice are the ones moving their practices across state lines.  When you couch this as a Freakanomics question, you read the author’s stunning conclusion: “A back-of-the-envelope calculation suggests that if all of a state’s neighbors were to pass caps on noneconomic damages, there would be 311 fewer deaths per year in that state.”

So how is Maryland looking?  Virginia has a total cap of $2.15 million.  Delaware, Pennsylvania, and West Virginia do not have caps on damages.  So if these states can add draconian caps on damages in medical negligence claim, we could save lives in Maryland.   Of course, this exposes another insanity:  states hoping to pull doctors from other states or send their malpractice ridden doctors elsewhere.   I love my Maryland but it seems really unseemly to battle other states to steal doctors.   This study shows that this battle is not only foolish, it causes the lives of your own citizens if you are using caps to recruit doctors.