Most Marylanders do not understand what the Maryland Insurance Administration does, picturing that old white guy with his secretary and two minions. But the MIA is a major operation with a $30 million budget. It employs a zillion more people than you think. 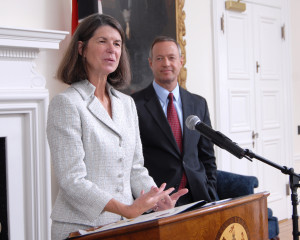 Therese M. Goldsmith graduated from the University of Maryland Law School in 1998 and went to Venable. She made partner in short order at Hogan & Hartson. Governor Martin O’Malley appointed her to serve as the Maryland Public Service Commission in 1998, which regulates public utilities and some transportation companies in Maryland. Now she is stepping into Ralph Tyler’s shoes, who is now with the FDA. I don’t think I agreed with Ralph on everything, but he was a good guy who was kind enough to regularly speak to my insurance law class at UB.

I approve of this nomination. Based on what information? As usual with this kinda stuff, if you are not an insider, very little. Reading attenuated tea leaves, Goldsmith handled a racial profiling case against the Maryland State Police back when she was at Hogan & Hartson. Being against racial profiling does not exactly establish pro-consumer/victim bona fides (who exactly is in favor?) but being willing to do so on behalf of the ACLU (a group even I find over-the-top sometimes) is a hopeful harbinger of an inclination to protect victims of insurance abuse.

(Then again, Gerald Ford probably thought he had a good, safe conservative pick with John Paul Stevens. And people from big law firms scare me because they may have drunk the Kool-Aid served there. So who knows?)