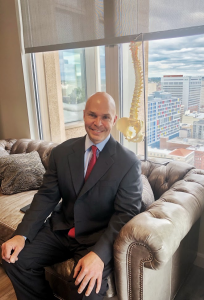 This is/was not a onetime thing.  His compensation varied between nine and fourteen million a year between 2007 and 2015.  A good gig if you can get it. (New State Farm CEO Michael Tipsord earned a paltry $6.6 million in 2018.)

Plaintiffs’ lawyers are reflexively eager to bring up insurance company CEO salaries.  Implicit in this complaint is the idea that State Farm’s lowball offers and hardball tactics are the reason their profits are so high and their CEO is overpaid. I think these lawyers misplace these complaints for many reasons.

First, General Motors took a $39 million loss last quarter. While this statement is misleading, it underscores the obvious: big companies can have large profits and large losses. A number like $5.6 billion in a vacuum means nothing, particularly for a huge company like State Farm.

If you think the insurance companies make too much in profit, put your savings in a publicly-traded company like Allstate. But be careful: Allstate, for example, has underperformed the market in the last ten years. Insurance companies are hardly the Google of the stock market and I really don’t think there is any evidence that their profits are historically excessive. (Please, correct me if I’m wrong.)

Second, regarding State Farm’s CEO’s salary, State Farm is a Fortune 100 company. If high CEO salaries are a problem (and I don’t think they are for reasons that are not worth getting into here), it is not specific to the insurance companies. Big company CEOs are making a ton of money in every business.

Finally, I think it is misplaced to spend energy complaining about low ball offers. Setting aside first-party obligations where the paradigm is a little more complex, insurance companies should try to do whatever they ethically can to decrease payouts. It is our job as personal injury lawyers to do the opposite. We are not shooting for fair offers; we are trying to get as much as we can for our clients. They call us greedy and we call the insurance companies cheapskates.

But maybe this is not the worst thing in the world. We have an adversarial system that has been in place for a few hundred years and I think it works. If it does not, it is not a perfect system. It is just the best system.

State Farm and their brethren will play tough. That’s okay. If personal injury lawyers hold up their end of the bargain and fight back, the system will work just fine.

In response to an August subpoena for records from the grand jury investigation, State Farm filed a declaratory judgment action seeking to stop the investigation, and by September, had got a temporary restraining order. Now in mid-January, Hood has asked another federal judge to lift that order. That motion is still pending.

At issue is whether this is a continuation of the “crimes against policyholders” investigation or whether this is a validly new and different claim not covered by the agreement of January 2007. The attorney general has not openly identified the recent investigation’s focus. There is speculation that it is the handling of the National Flood Insurance Program claims.

Hood is asking the temporary restraining order banning him from investigating the criminal handling of Katrina claims by State Farm to be dissolved. Yet attorney Edwin Snyder, a consultant for Hood, said, “The operative phrase is ‘Hurricane Katrina claims.” If it’s unrelated to that and it’s new, it’s available to investigate.”

I can’t believe I’m saying this, but I think the Mississippi Attorney General is looking to take a second bite of the apple when he has already agreed to take just the one bite. The earlier agreement appears to have resolved any outstanding Hurricane Katrina claims. But these stories underscore that the corporate culture of arrogance is not something that these insurance companies can selectively flash. The same executives that once tried to bully personal injury victims and their lawyers, often with substantial success, have moved up the food chain. Now, they make corporate policy decisions that no longer impact just individual claims but the entire company. Dealing with politicians requires a certain level of diplomacy and respect. Yet insurance company executives have embedded in their DNA (at least their professional DNA, a distinction that fairness requires) the paradigm of arrogance and obstruction. Why else do you think the state agencies and politicians are getting so riled up?

I’ll admit that I just made up this theory about ten minutes ago, but you have to admit – it makes some sense. You might also wonder whether some of these politicians have some other agenda beyond justice in vilifying these insurance companies. But why interrupt a great tale of good versus evil with such nuance?