The write up on Baltimore begins with the notion that for evidence that Baltimore is a judicial hellhole, well just ask Miller & Zois.

Baltimore has been described as an up-and-coming Judicial Hellhole for years, but don’t just take our word for it. Plaintiffs’ firms, such as Miller & Zois, advertise Baltimore as “a favorable jurisdiction for plaintiffs’ injury lawyers.”

Is Miller & Zois calling the city a jurisdiction “favorable” for plaintiffs’ attorneys tantamount to prove that Baltimore is a “judicial hellhole” for defendants? If so, I really need to adjust my expectations.

But that is just the start. This report prefers rhetoric to exactitude at every turn and reads like a college term paper that was turned in at that last minute. It complains “Judge Glenn” – retired Judge Glynn – is rigging the asbestos docket. How? The report does not exactly say. It implies it is by consolidating the cases. Yes, the asbestos cases in Baltimore are consolidated. Baltimore joins a zillion other jurisdictions that have done the same thing. Why? The cases are consolidated on causation, not product identification or damages. This is not a class-action lawsuit. The cases are consolidated on damages because it is simple to prove. If you got mesothelioma you either got it from asbestos or you were a vermiculite miner. Call me crazy, I’m willing to let the court figure this out for 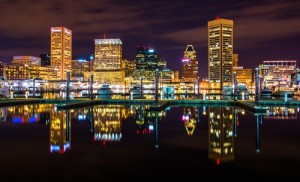 This is how this report reads from top to bottom. The entire premise of this beat down of Baltimore is just filled with unsupported innuendo. The impression left is that asbestos cases being filed in the city are because of forum shopping, Plaintiffs’ attorneys looking to get to these juries. But the auto plants, shipyards and steel mills, and many other defendants (Locke Insulators, for example) are located in Baltimore. That’s not forum shopping, it is suing where the harm occurred.

The report also takes on Maryland’s voir dire process, which I have also complained about myself. But the report makes it sound like Maryland’s truncated voir dire process disadvantages defense attorneys when the benefits and perils of the system impact both sides of the aisle equally. Meaningless voir dire conducted based purely on how someone looks at what their job is hurts plaintiffs as much as defendants.