Social media is all the rage for defendants’ personal injury lawyers. In the olden days, the only really fun Perry Mason moments from discovery for defense lawyers was surveillance video. Out of the 10,000 times the insurance company would do surveillance, someone would hit a “guy who claims he is in a wheelchair runs a 6 minute mile” jackpot. 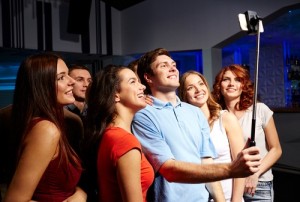 These days, your selfie stick might adversely affect your claim as a plaintiff.

When I started as an associate, the partner I worked for told repeatedly, one “got ya” surveillance story he had when he was a young associate. Every time he told the story, he exaggerated the facts a little more. Most people listening, I’m sure, suspected as much. But no one cared, because it was a fun story. These conflated stories have kept a lot of private investigators in business. Every lawyer wants to tell an “I tricked them” story of their own. It is the defense lawyer equivalent of a high stepping 109-yard interception return.

Now, defense lawyers view social media as surveillance video on steroids. It is a lot cheaper too. There is, in their estimation, a treasure trove of social media weapons to be used against personal injury plaintiffs that contradict their claims. I say “social media” but I think 95% of what defense lawyers really think is out there is on Facebook. MySpace barely has a pulse, Google +1 is just getting off the ground, and Twitter’s 140 characters is usually not enough space to contradict your own injury claim.

In a malpractice or car accident case, the primary purpose of Facebook discovery is to show that the plaintiff is not as seriously injured as claimed in their lawsuit. It does not take a law degree to know there is a method to the defense attorneys’ madness. If you put up a picture of yourself playing full-court basketball, there is a real good chance you are not as hurt as you say you are, and are more than able to hold down a job.

So, there is undeniable potential relevance. But for defense lawyers, there is one thing standing between them and this grab bag of goodies: how do you get the stuff? Anyone who has tried to dig into the Facebook of their ex to find out how miserable their lives are without them knows that it is not so easy. Often doable, but hard. So many overworked defense lawyers are dropping the spy stuff and cutting right to the chase with discovery:

Few courts will allow this insane fishing expedition, and most defense lawyers know this. So, smart personal injury lawyers will just object. In the vast majority of cases, that will be that. But, regardless of whatever warning you gave your client, know what they have posted on social media after the accident/malpractice before the client’s deposition or answers to interrogatories. Because in serious cases, defense lawyers will make Herculean efforts to find out what the plaintiff has posted, with or without the gift of hand delivering their username and password.