Do you want to make a pain and suffering claim without a lawyer?  I believe car crash injury victims are always better off hiring a lawyer for many reasons not worth fully exploring here (but I do here).

But if there is any claim where an injured victim can justify proceeding without an attorney, it is in the classic neck or back soft tissue/whiplash injury traffic collision case with pain and suffering but clearly no permanency.

My belief has always been that the benefit of experienced counsel can bring to a case is proportionate to the severity of the injury. If you have a permanent injury, you are foolish if you don’t hire a lawyer. (I wouldn’t handle my own case, either. Because that is also an awful idea.)

A quality attorney in serious injury and death cases will statistically get you a lot more money – put a lot more money in your pocket – than you would get for yourself. The same is probably true in soft tissue neck/back injury cases, too.

But car accident lawyers cannot run from the fact that the difference is much less significant in smaller cases.  Some people just prefer the path where lawyers are not taking money away from their settlement. So be it. As long as you understand you run a risk just like you run a risk when you try to install your own bathroom floor, just typically with a lot more money at stake.

But the reality is that millions of Americans walk away from a settlement with an insurance company with a smile without knowing they just got completely ripped off.  I DON’T WANT THIS TO HAPPEN TO YOU.

Before I get into the list of things you need to do when trying to reach an out-of-court settlement for your case, let’s be clear what you will not find here – or anywhere – that many of you seek: the specific value of your case. It is not hard to figure out who much money you should get for a whiplash-type case. It is really not. But it requires reading the medical records and knowing where the case would go to court. The Internet won’t do that for you. So, seriously, you can quit looking. I won’t be able to tell you in this blog post how much money your soft tissue case is worth. (You can get some real information, however, here.)

While, obviously, I’m not offering legal advice to you because you are not a client of our law firm, this is a generalized list of what you should consider in handling your own soft tissue whiplash injury case in Maryland without a lawyer:

That is the short answer. The longer answer is more complicated. In some cases, our accident lawyers allow the client to give a statement for reasons that are too complex to address here. In uninsured motorist cases in Maryland, arguably you are required to give a recorded statement as a condition of recovery.

Get Pictures of Accident and Injuries

Get photos of your car, any visible injuries that you have, and the scene of the accident. This is critical to establishing liability and the scope of your injuries. There are lots of studies that say there is no correlation between the severity of the property damage and the victim’s injuries. But, intuitively, these studies don’t make sense to any of us. We all figure that the more serious the accident, the more likely there are to be serious injuries. Insurance companies definitely feel that way and offer more money in “good impact” cases.

Collect All of the Medical Records and Bills

The guts of a soft tissue injury claim are contained in the medical records and medical bills. Collect them all. Yourself. The insurance company is obligated to compensate you for all medical bills that you incurred from the accident, regardless of whether these bills have already been paid by PIP or health insurance. Insurance companies have made billions pretending this rule – called the collateral source rule – does not exist when settling accident claims with victims without lawyers (or with clueless lawyers).

In the end, the best way to maximize the value of your soft tissue injury case is to listen to your body and your health care providers and do what you and they think you should. Serendipitously, this also happens to be the best thing for your case. (Parenthetically, if you are thinking of getting additional medical treatment or tests because you want to increase the value of your case, please stop reading this. I don’t want to help you.  You are taking money away from people who are really hurt.)

Figure Out the Statute of Limitations

Again, going forward without a lawyer – actually, going without a good, experienced accident lawyer – comes with risks. One of those is getting the statute of limitations wrong. It seems easy enough. But there are so many ways to get it wrong. Without having a lawyer review your case, you are taking a risk because there are general statutes of limitations and sometimes more specific statutes in some jurisdictions. In most cases, you will be fine without a full analysis of the details of the statute of limitations issues, but obviously, you are running a real risk.

If you think this is a risk worth taking, at least do some research. In many states, including Maryland, the time allowed for bringing a claim against a governmental agency or its agents or employees has a statute of limitations that is a small fraction of the general statute of limitations (and it is hard to always know in what capacity the defendant driver was acting at the time of the accident).  I’m begging you, don’t assume that justice will be done in the end because the judge will not let you lose your entire claim on some dumb technicality. Believe me, it happens all of the time.

Talking to Your Health Care Providers

Tell your doctors and your health care providers everything that they need to know about your current condition and past medical history. Be completely honest or it will most likely end up coming back to haunt you.  I’ve told clients this who refused to listen.

But… also keep in mind that everything you tell a health care provider may well show up in your medical records. You do not need to offer additional information that is unrelated to your case.  So if you knocked over a convenience store 10 years ago, you might want to keep that under your hat.

Don’t Lie to Your Doctors… Or the Insurance Company 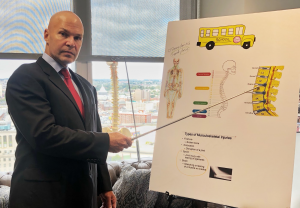 I just touched on this but it is worth repeating.  The big mistake we see people make time and time again is that they shade the truth or flat out lie, thinking that no one will ever know. Who could possibly know that I hurt my back 8 years ago in a skiing accident in Colorado? The insurance company – that is who.

It is counterintuitive for some. But the best way to maximize the value of your case is to be completely truthful to everyone at all times. You don’t have to offer up every skeleton in your closet. But it does mean that you should not tell anyone anything or put it in writing unless it is 100% accurate.  Forget my high horse for a second.  In most cases, 100% honesty is going to increase the settlement value of your case.

Do liars sometimes get over on the insurance companies? Absolutely. But, I’m telling you, statistically, the liars and exaggerators do not do as well as clients who play it straight.  These companies have access to a lot of information, including any prior claims you have made of any kind.  Just do the right thing.  Play it straight and you will help your case and you can sleep at night.

Is There a Formula I Can Use to Calculate the Value of My Case?

There really is not. But I’ll give you a few anyway. There are 2 different formulas that insurance companies may occasionally use to calculate pain and suffering damages in accident cases: (1) the multiplier method; and (2) the per diem formula.

I like the per diem settlement formula better because it takes into account the scope of the victim’s injuries.  Just multiply the medical bills and special damages is a completely foolish way to calculate pain and suffering damages and settle cases.  Why does anyone even talk about “times bills and specials” as a formula for settling cases?  It is the easiest to calculate.

Request all of your medical bills and records, document your lost wages, and anything else you need, and send them to the insurance company. Provide them in an indexed package that chronologically orders the records. Look organized and serious by the way in which you present the medical records. Include in your letter any particularly important facts about your injuries and your pain and suffering but keep it brief. No insurance adjuster is going to read a treatise in a soft tissue injury case. Many won’t even read the demand.

How much should you ask for in your demand? I have no idea. Again, there is a downside to not hiring a lawyer. The value of a car accident case is based on so many variables on pain and suffering damages so when you proceed without a lawyer you do not have anyone to put your suffering into a more global context. Unless you have seen hundreds of personal injury cases and have seen how judges and juries respond to similar facts and injuries, you really are guessing at the value. (Actually, we are all guessing on some level; experienced counsel is just going to have a much better guess.) But as long as you understand this is the risk you take without a seasoned attorney, you have to figure out what you think is reasonable and pick a figure that is higher than that number, but not so high as to tell the insurance company that you are unreasonable or have no clue what you are doing.

One other point: definitely use the “I’m going to hire counsel if we can’t resolve this” arrow in your quiver towards the end of the negotiations. 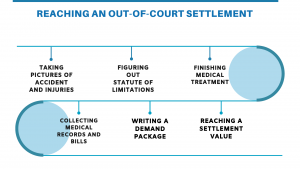 Above, I told you that I have no idea how to value your case for settlement because I have not read your medical records or analyzed your claim.  But you still want more information on whiplash accident case value.  Let me give you some car accident settlement and verdict stories to give you some flavor of the value of these cases.  These are circuit court cases in Maryland.  But please keep in mind that you cannot use prior case outcomes to value your own case.  You also cannot find the average whiplash settlement for a neck and or back injury by pulling up verdicts and settlements in cases similar to your own.  There are just too many variables at play.

How About Cases Outside of Maryland?

What If I Need a Lawyer?  What Will It Cost?

If you cannot handle your own case, you should call me or another Maryland personal injury lawyer. It shouldn’t cost you anything to hire a lawyer for a car accident case.  A personal injury lawyer will handle your car accident case with no money down on a contingency fee arrangement.  This means your lawyer receives a percentage of any money collected in your case.  If they don’t collect anything they don’t get paid.

Ultimately, if you don’t hire a lawyer, there is a really good chance you are going to get burned and cause irreparable harm to your case. But for some, again particularly in smaller cases, it is a chance that you may want to take to settle your case without a lawyer.  If that is the spot you believe you are in, I hope this information helps you.