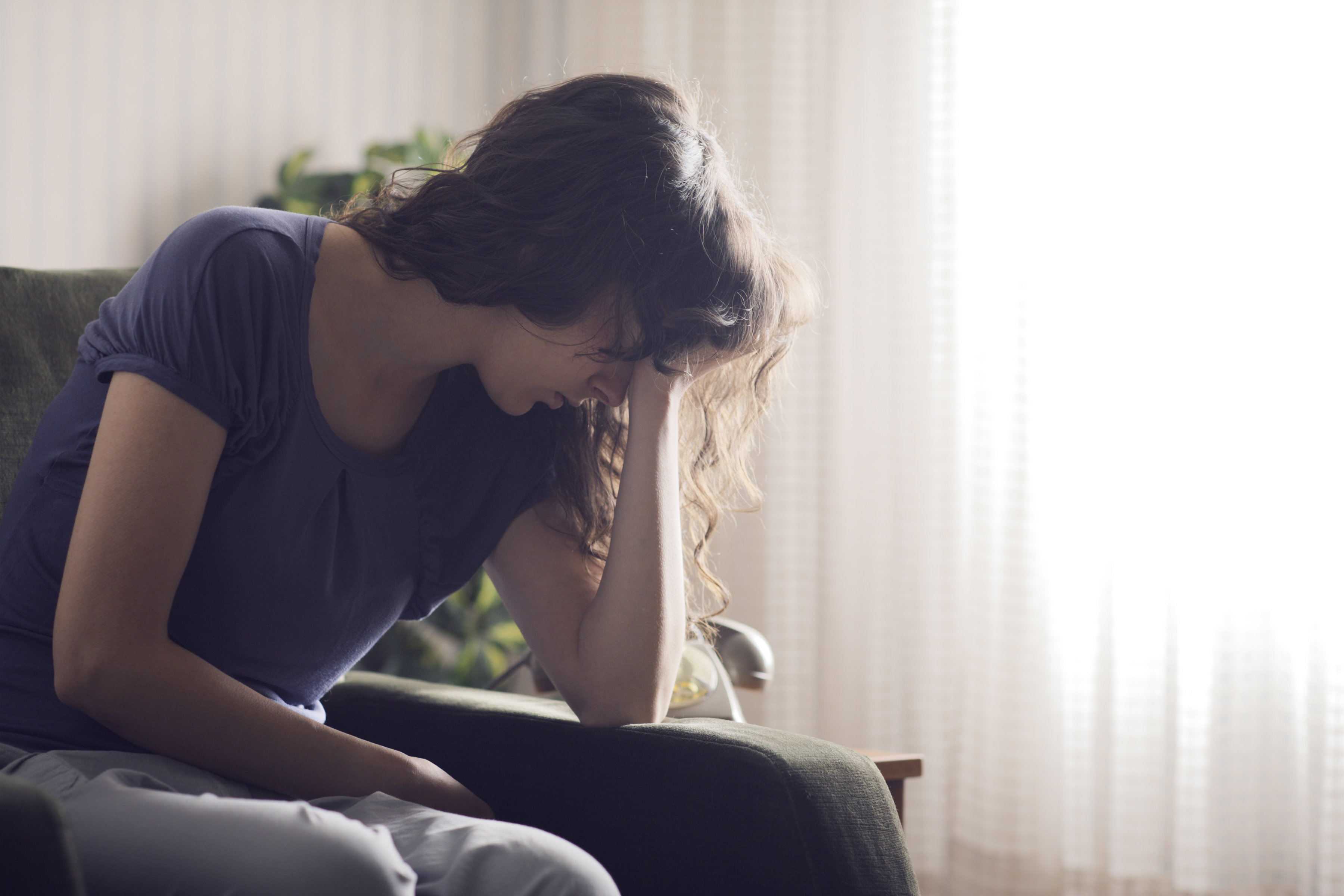 What is the value of head injury cases?

I’m fortunate in that I don’t get many headaches, a blessing I attribute to good hydration and genetic good fortune. On the rare occasion that I do get headaches, they are debilitating. It is hard to enjoy much of anything in life when you have anything north of a mild headache.

Juries struggle with figuring out how to value personal injury cases when the primary injury is a head injury that caused —  and may continue to cause — headaches.

Why? Because headaches are mostly subjective. So the credibility of the plaintiff – which is usually 90% of the game at trial – becomes the entire game because you can’t know the pain level inside someone’s head. Instead, decide if you believe that their report of pain is what they say it is.  Certainly, objective injuries surrounding the claim — like a diagnosis of post-concussion syndrome — bolster the settlement value of injury claims.  But, ultimately, it boils down to the credibility of the victim.

What Is the Settlement Value of Headaches?

Let’s look at the median verdicts by year:

This is the most recent numbers I have but I feel pretty confident th2 2020 average and median would be similar.

Putting this in context, the average award in a personal injury case nationally is approximately $791,756. So verdicts in headache cases are 5% of the national average? Wow.

Here are a few more statistics of interest:

How Is Headache Settlement Value Calculated?

Verdicts in headache cases can exceed a million dollars, albeit rarely as we saw in the statistics above. What do those cases have that the average case does not? Those cases usually have three components: (1) an objective head injury, (2) severe property damage, and (3) the testimony of a doctor who believes that (a) the headaches caused by the accident, and (b) there is no expectation that the plaintiff will get relief from the headaches in the future.

[It is important to remember that these settlements and verdicts statistics are all civil tort cases.  The law treats worker’s compensation cases differently, and the values of those cases are typically much lower.]

I love this graphic but this shows data from 15 years ago when I started this blog: 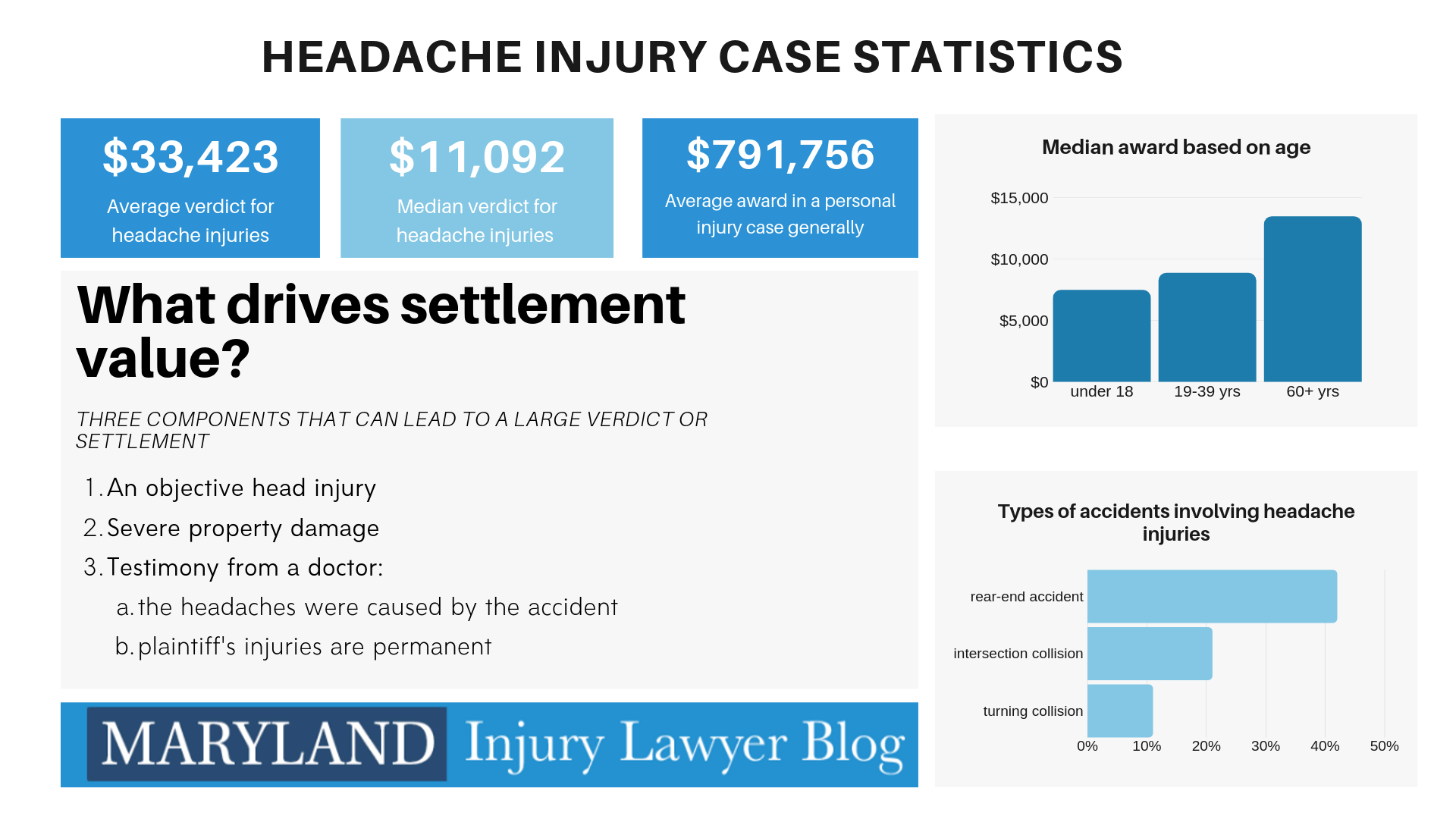 So the average verdict has gone up a great deal but the median verdict, which is more telling, remains nearly the same.

Below are settlements and verdicts in headache injury cases.  You can find several Maryland cases (and a disclaimer on how to use these verdicts) here. We will give this a 2020 facelift in the coming weeks.  (Writing this on February 18, 2020.)

Post-traumatic headaches after a car accident often occur in two weeks following trauma because of a whiplash injury to the neck.  The classic presentation of this type of headache starts in the back of the neck and then radiates to the frontal region.

This type of headache is attributed to myofascial trauma.  Some neurologists think that referred pain from damage to the myofascial tissue is the most common source of these often chronic headaches.  Most of these headaches resolve in six months.  But 10-20% do not resolve.

Sometimes, headaches are a harbinger of even greater trauma.  Headaches are the most common physical manifestation of a traumatic brain injury (TBI).

What Does the Defense Lawyer Argue in Headache Cases?

Can you win a personal injury case when the primary injury is headaches? Absolutely. But it will often be a fight. The biggest defense insurance companies have headache cases is that you cannot see the injuries. Ultimately, the jury’s confidence in the honesty and integrity of the plaintiff will be critical to the outcome. This is particularly true where there are a normal brain MRI and other brain imaging tests.

The biggest defense insurance companies have headache cases is that you cannot see the injuries.  Ultimately, the jury’s confidence in the honesty and integrity of the plaintiff will be critical to the outcome.  This is even truer where there is a normal brain MRI, brain CT, and x-rays.

If the onset of the headaches were more than two weeks after the crash, then you will have a hard time getting a neurologist or ENT to support your claim.

Insurance companies also have experts who are quick to deny migraine headaches are caused by car accidents.  Many neurologists do not believe post-traumatic migraines occur after automobile accidents. You would think it would be a hard argument to make, but our lawyers see this defense all the time.

Defense experts typically claim migraine headaches are genetic disorders that run in the family, particularly if the victim claims a headache on one side of the head.  Many post-traumatic headaches have migraine features.  So it might not technically be a migraine, but it sure feels like one if you are the victim.

When the defense lawyer has a liable plaintiff that is hard to call a liar, they sometimes argue that the victim’s pain medications since the car crash have caused an analgesic rebound or medication overuse headaches.

The toughest headache cases are an exacerbation of injury when the victim already struggled with headaches and claims the crash made them worse.  Defense neurological experts argue that it is impossible to sort out how much pain is because of the trauma of the crash.

How Can I Get a Lawyer to Help Me?

Below are some new articles on headaches and some older studies that are often used by experts in injury litigation involving headaches.