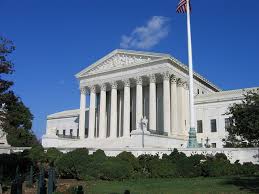 What happened was a woman was killed in a head-on collision when her body jackknifed around a lap-only seatbelt in her family’s 1993 Mazda MPV Minivan. The result was severe abdominal injuries, internal bleeding, and ultimately death. There was no lap/shoulder seatbelt installed in her seating position. I think sounds defective on its face by most of us. Mazda does not make them anymore. Neither does anyone else.

A tie is a win for Mazda because it won the case below. The California Court of Appeal ruled that petitioners’ lawsuit was preempted by Federal Motor Vehicle Safety Standard (“FMVSS”) 208.  That court found that “FMVSS 208 preempts common law actions alleging a manufacturer chose the wrong seatbelt option” and that the failure to warn theory of liability was similarly barred by federal preemption.” (The accident happened in Utah but the plaintiff filed suit in California state court.)

Justice Elena Kagan is sitting this one out because, as Solicitor General, she urged the Supreme Court to consider the case. I’m sure she will consider the facts anew when she gets a crack at this in a different context, but is there any genuine doubt about how Justice Kagan will rule on this?

I realize it is a conflict because she looked at it as an advocate. But, in the real world, is it a good idea that Mazda wins a case that we all know will get flipped next time we hear the same fact pattern? While I’m on a roll asking rhetorical questions, is it worse to be an advocate in a case you end up ruling upon or going hunting with a buddy (Scalia and Chaney) and then deciding a case where your buddy is a party? (I don’t care that the lawsuit was not “personal”. Every lawsuit with your name on it is personal on some level.) Think about your relationship with anyone you have ever taken a social trip without out-of-state. You are tight. I can’t think of a person in the history of my life that I have taken an out-of-state trip with that I could not be objective about.

But that is old news. I drudge this up only to underscore how loosely the Supreme Court has been about conflicts in the past. The real point is the injustice to the Plaintiffs who never get their day in court in a case that has been won before their lawsuit and will be won again after they lose. It just seems unfair.

What about Mazda’s argument? Mazda is saying, look, the Transportation Department’s National Highway Traffic Safety Administration did not object to lap belts before 2007. This is an old car. We can’t retrofit every car for every change and we had no information that people were dying in car accidents from these seat belts.

Not a terrible argument. It might convince me if I were on the jury. But what does the evidence show? Did Mazda know these lap belts were causing fatal car accidents? Did someone at Mazda express concern about it, and were they dismissed with a “don’t worry, we won’t have any liability” response? I don’t know. This is why we have a discovery process, and this is why we have jury trials.