Monsanto Roundup lawsuits have led Bayer to pay billions of dollars in settlement compensation payouts to victims and their families with non-Hodgkin’s lymphoma.

Plaintiff lost the Shelton case.  But the good thing about 2022 Roundup lawsuits is if you don’t like a verdict, another trial is around the corner.  Another Roundup trial is in its second week in St. Louis, a much better jurisdiction for plaintiffs.

In other news, science is continuing to raise new concerns about Roundup.  A new study recently published suggests that glyphosate, the ingredient in Roundup that has been linked to lymphoma, may also be linked to an increased risk of Parkinson’s disease and neurologic disorders.

The study appeared in the Journal of Neuroinflammation and found that glyphosate is able to pass through the blood-brain barrier, which is an attribute displayed by chemicals that are known to cause neurologic disorders.

The big thing in Roundup lawsuit right now is the Shelton case in Kansas City in Missouri state court.   This trial, which has been proceeding at a snail’s pace, is now in Bayer’s case.  We could get a verdict as early as next week depending upon how many witnesses Bayer’s attorneys want to call.

This week, the plaintiffs’ case came to a close and Monsanto promptly filed a motion for a directed verdict. We see these motions by defendants in tort cases all the time, but trial courts rarely grant them. On Wednesday, the Court denied Monsanto’s earlier motion which sought to have the testimony of the plaintiff’s causation expert (Dr. Kenneth Spaeth) stricken. Bayer has started calling its witness and hopefully, this trial concludes soon.

But Roundup lawsuits continue to be filed.  There are almost 4,000 lawsuits still pending in the Roundup MDL class action in California as of March 2022.  There are many thousands more filed in state court.

Some of these lawsuits are because Bayer could not reach an agreed-upon settlement amount with the victim. But new glyphosate victims are filing lawsuits all of the time and victims call my office every day.

In fact, on December 9, 2021, there was a new Roundup verdict.  The first defeat for a Roundup NHL victim.  This 4th jury trial in the continuing Roundup litigation involved a woman who claimed she developed NHL from Roundup.  The plaintiff was a woman in her 70s who alleged that she developed lymphoma from years of using Roundup in her home garden.

The trial in Donnetta Stephens v. Monsanto was an unusual trial.  The entire proceedings were conducted via Zoom video conference because of COVID restrictions in California.  So, yes, any loss is a tough loss and it is hard not to feel for Ms. Stephens.  But trying such a complex case by Zoom and all the emotion that is lost online… it is hard to put much stock in this verdict or think that it is a harbinger of things to come.

The remaining Roundup cases in federal court are on hold while Bayer continues to await word on whether the Supreme Court will hear its appeal from the Ninth Circuit in the Hardeman case. In December, the court punted on deciding on Bayer’s petition for certiorari (which means agreeing to hear the appeal).  Instead, the Court invited the Biden administration to weigh in with its own brief to see if the government will side with Bayer as the Trump administration did.  That has not happened yet and there is no deadline so this could drag through the end of the year.

There are two reasons Roundup lawsuits will continue for years.  First, Glyphosate-induced non-Hodgkin’s cancer does not develop overnight.  You can develop cancer from Roundup more than ten years later.  People who used Roundup years ago are now calling our Roundup lawyers to bring a claim.

Roundup Is Still on the Market

Second, I don’t think there has been a class action lawsuit in world history where the defendant paid $11 billion and keep the product on the market without a warning. That would seem insane, right?  But that is exactly what is happening here. So more Roundup lawsuits will continue to get filed.

The Crux of the Roundup Litigation

A key ingredient in Roundup, glyphosate, is associated with several cancers, including non-Hodgkin’s lymphoma and hairy cell leukemia.

This concern has caused public outrage by consumers who have been using Roundup for years or even decades.  Monsanto vigorously found the possibility that Roundup causes cancer. After Bayer purchased Monsanto, Bayer grabbed the torch of defending the safety of the produce.

Undeterred, lawyers filed thousands of lawsuits from victims who claim Roundup failed to warn of the possible risks with glyphosate and that the chemical ultimately caused their cancer.

In 2016, after cases began to pile up against the company, a federal judiciary panel created a Roundup MDL, which is a “sort of” class action of all the Roundup cases in federal court.  This had the great benefit of allowing plaintiffs’ attorneys to work together to develop the facts and the science behind the glyphosate claims.

The first Roundup verdict came in August 2018 when jurors awarded a plaintiff with terminal cancer $289 million in damages to a groundskeeper exposed to glyphosate weed killer.  The jury found that Roundup was a substantial factor in Dewayne Johnson’s Non-Hodgkin lymphoma.  Importantly, $250 million of that award was punitive damages.  What does that tell you?  It tells you that the jury was angry.

That amount stunned everyone. Me included.  Immediately, Bayer’s stock plummeted as the company began truly digesting, maybe for the first time, what the litigation exposure they had in these cases. 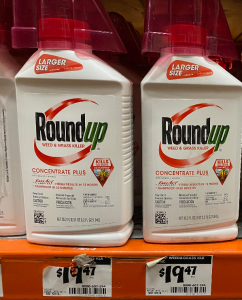 Roundup Still on the Market

In February 2019, the first federal court case from the Roundup MDL went to trial and ordered Monsanto to pay out $80 million. Only 3 months later, in May 2019, Monsanto was hit once again when jurors awarded a plaintiff with a staggering $2 billion.  Sure, some of these verdicts have been reduced.  But the jurors are sending a loud message.  This is how the mass settlement happened.

What Is the Average Settlement Payout for the Roundup Lawsuit?

The average settlement payout ranges from $125,000 to $175,000 depending on what deal individual lawyers negotiated. Wrongful death cases were worth more as are cases where there were not statute of limitations complications

Frequency, duration, and circumstances of her Roundup exposure are also relevant considerations in the points calculation to determine Roundup settlement amounts.

What Is Bayer’s Latest Strategy on New Round Lawsuits?

Bayer has been arguing forever that the Federal Insecticide, Fungicide, and Rodenticide Act (FIFRA) preempts failure to warn of the non-Hodgkin lymphoma risk of Roundup. The idea, in a nutshell, is that federal law prevents any state court claims.

No one is buying it. A few months ago, the 9th Circuit ruled that a Roundup plaintiff’s failure-to-warn claim was fully consistent with FIFRA. But Bayer is hoping against hope that the Supreme Court will take up the case.  But in May 2022, the Biden administration all but ruined any possibility of that happening as you will see in the updates above.

What Happens for New Roundup Lawsuits?

The old Roundup lawsuits will settle and people should get their money in 2021 and 2022.

Our Roundup lawyers believe the MDL class action will continue for years to administer the federal Roundup cases. You can also expect more lawsuits in jurisdictions like California, Georgia, Illinois, and Florida in state court.

Our Roundup attorneys also believe that recently diagnosed NHL cases are likely to have higher settlement compensation payouts than older cases. Why?  Clearly, Bayer knows of the risk of Roundup and it is making, we think, a very cold-blooded calculus that the lawsuits will be cheaper than the cost of giving up such a lucrative product.  My prediction is the ultimate settlement amounts for newly diagnosed Roundup cases will be higher than the current Roundup settlements that are settling in the mid-$150,000 range.

The settlement of mass tort cases is a time-consuming process and COVID-19 has made it that much worse. When you would get your settlement payout is unknown.

No one knows the exact mechanism of how Roundup causes non-Hodgkin’s lymphoma. But our lawyers do believe that glyphosate and lymphoma studies show that glyphosate causes damage to the DNA of cells and alters the cell’s regulatory systems. This disturbs our body’s, normal physiologic response system and ultimately causes cell death and the formation of tumors. NHL is the one cancer that is best linked to glyphosate but there are likely many others.

What Other Cancers Could Be Caused by Roundup?

We do not know what other cancers could be caused by Roundup. What we do know is that when glyphosate is digested by animals, the chemical is excreted to some degree through the urinary system. So it is reasonable to suspect pieces of the urinary system (bladder, kidney, ureter) as possible Roundup-related cancers.

To be clear, our Roundup lawyers are not handling these claims, at least not yet.

For many of our clients in the settlement, it will hopefully be in 2021.  Some of our clients have already received settlement compensation.  Others will not get resolved in 2022.  Some issues need to be sorted out first.

When Will Settlements Be Paid on Newly Filed Roundup Lawsuits?

One large $11 billion group of Roundup lawsuits have been settled. Some of those victims have already received most if not all of their settlement amounts. Most of the other Roundup settlements that have been resolved are still waiting for their claims to be finalized (yes, this takes way too long).

What Are Roundup Settlement Points?

When most of the Roundup cases settled, how much money each victim received depended upon certain criteria designed to determine the severity of the injury and the strength of each Roundup lawsuit.  So the settlement amounts were based on certain benchmarks.   Each point has a certain value attached, say $400 a point.  Points are “earned” for such factors as

Glyphosate is a colorless, odorless, crystalline salt is formulated by combining the deprotonated glyphosate acid and a cation (isopropylamine, ammonium, or sodium).  Glyphosate is thought to be the chemical in Roundup that causes non-Hodgkin’s lymphoma. We know humans and animals absorb glyphosate because it can be found in blood and urine.

Is NHL a Common Type of Cancer?

According to the American Cancer Society, NHL is a relatively common cancer. There are approximately 75,000 new NHL cases reported every year in the United States  Men are a slightly greater risk.  The risk a man will develop NHL in his lifetime is about 1 in 41; for a woman, the risk is about 1 in 54.”

Let’s take a look at a typical Roundup lawsuit being filed in 2021.

A former Ohio Department of Transportation groundskeeper, Gene Wyatt, became one of the most recent plaintiffs to join the continuing Roundup litigation.

Wyatt is a prototypical Roundup plaintiff. He regularly used Roundup as part of his job while employed at the Ohio Department of Transportation facility in Washington Courthouse, Ohio from 2001 to 2011. Wyatt applied Roundup with a vegetative applicator weekly throughout his 10-year period of employment. In January 2015, several years after his occupational Roundup exposure, Wyatt was diagnosed with non-Hodgkin’s Lymphoma. Wyatt’s lawsuit alleges that his cancer was a direct result of his weekly use of Roundup for 10 years.

Getting a Roundup Lawyer for Your Lawsuit

If you have a potential Roundup lawsuit, our lawyers are here to help. Call us today at 800-553-8082.  There is no hard sales pitch.  We will answer your questions and invite you to join the MDL class action lawsuit or state court claims if you qualify.  You can also reach out to us online.