In its final decision of the Term, Maryland’s Court of Appeals gave us an (arguably) game-changing decision Rochkind v. Stevenson. The court announced that it was discarding the old Frye-Reed rule and formally adopting the Daubert test for the admissibility of expert testimony.  We all knew we would get here one day. And here we finally are.

The case that gave rise to this appellate decision began back in 2011 when the plaintiff brought a lead paint case against her former landlord, Stanley Rochkind.  The Rochkind name has been ubiquitous in the lead paint world, having been the defendant in hundreds of claims over the last 25 years that were covered by multiple insurers.

The plaintiff made the classic lead paint claims.  Her lawsuit alleged her exposure to lead paint as a child caused her to suffer brain injuries that led to attention deficit hyperactivity disorder (ADHD) and other psychological disorders. In support of this allegation,  the victim relied on expert testimony from Dr. Celilia Hall-Carrington, a pediatrician. Dr. Hall Carrington testified that the plaintiff experienced “lead poisoning” at the defendant’s rental property and that this lead poisoning was the proximate cause of her ADHD and other neuro-physical problems.

This case actually went through 4 separate trials (and 2 appeals) before ultimately making its way before the Maryland Court of Appeals in its current posture. At each of the trials, Dr. Hall-Carrington testified that lead exposure caused Ms. Stevenson’s ADHD and other issues. In support of this opinion, Dr. Hall-Carrington relied exclusively on epidemiological studies by the Environmental Protection Agency. The defense repeatedly challenged the admissibility of this testimony under Md. Rule 5-702 and Frye-Reed and repeatedly lost that challenge at the trial court level.

The fourth trial ended in a $3 million dollar verdict and yet another appeal. This time the Maryland Court of Appeals was asked to consider abandoning Frye-Reed and adopting the standard for expert testimony set forth Daubert v. Merrell Dow Pharmaceuticals, 509 U.S. 579 (1993).

The Court began its lengthy opinion by summarizing the history of the Frye-Reed standard in Maryland jurisprudence. The Frye-Reed standard in Maryland dates back to Reed v. State 283 Md. 374 (1978), where the Maryland Court of Appeals joined most other states in adopted the “general acceptance” test established in Frye v. United States, 293 F. 1013 (D.C. Cir. 1923). Under this test expert testimony would only be admissible if it were based on concepts or principles that are “generally accepted” in the relevant scientific community. In the decades that followed, this Frye-Reed standard was applied to resolve many cases involving the admissibility of novel scientific evidence such as polygraph tests, hypnosis, and light microscopy in asbestos cases. See Kelley v. State, 288 Md. 298, 302 (1980) (polygraphs); State v. Collins, 296 Md. 670, 678 (1983) (hypnosis); Keene Corp. v. Hall, 96 Md. App. 644, 652 (1993) (light microscopy).

The Court noted that in 1993 the U.S. Supreme Court discarded the old standard set forth in Frye and adopted a new, more flexible approach for admissibility of expert testimony that would be known as the Daubert standard. Under the Daubert standard, admissibility was evaluated based on a number of non-exclusive factors. Daubert was more pragmatic than the Frye standard and it gave trial courts greater discretion to admit expert testimony that may be novel, but based on sound principles. The majority of states quickly adopted the Daubert standard as law, but Maryland did not. Maryland remained among the dwindling minority of states that continued to apply its own version of the old Frye standard.

The Court explained that this continuing expansion had effectively caused Maryland’s Frye-Reed standard to evolve into a “Frye-Reed Plus” standard, which in practice was very close to the Daubert standard. In the Court’s view, this “jurisprudential drift” has created a duplicative analysis and created confusion on the issue of expert testimony. To resolve this confusion, the Court announced that it was formally adopting Daubert as the governing standard for the admissibility of expert testimony in Maryland.

Is Maryland's Adopting Daubert in Rochkind v. Stevenson in a Big Deal?

What do I think of the court’s holding?  I don’t like it. But not for the reasons you might think. Maryland personal injury lawyers are like traders on Wall Street.  We want the rules to read a certain way, sure.  But more important to us than which way the rule goes is knowing what the rule is.  I’m not sure I know exactly how courts will interpret the new rule.  I guess if we rely heavily on federal precedent, that would help us shore up some gray areas.  Maybe.  Also, how much time will it take from judges trying to get caught up COVID-19 (which will take years) as they trudge through who knows how many frivolous Daubert motions defense lawyers will be filing.  And believe me, that is what is coming.  They will file them like form motions in every case. 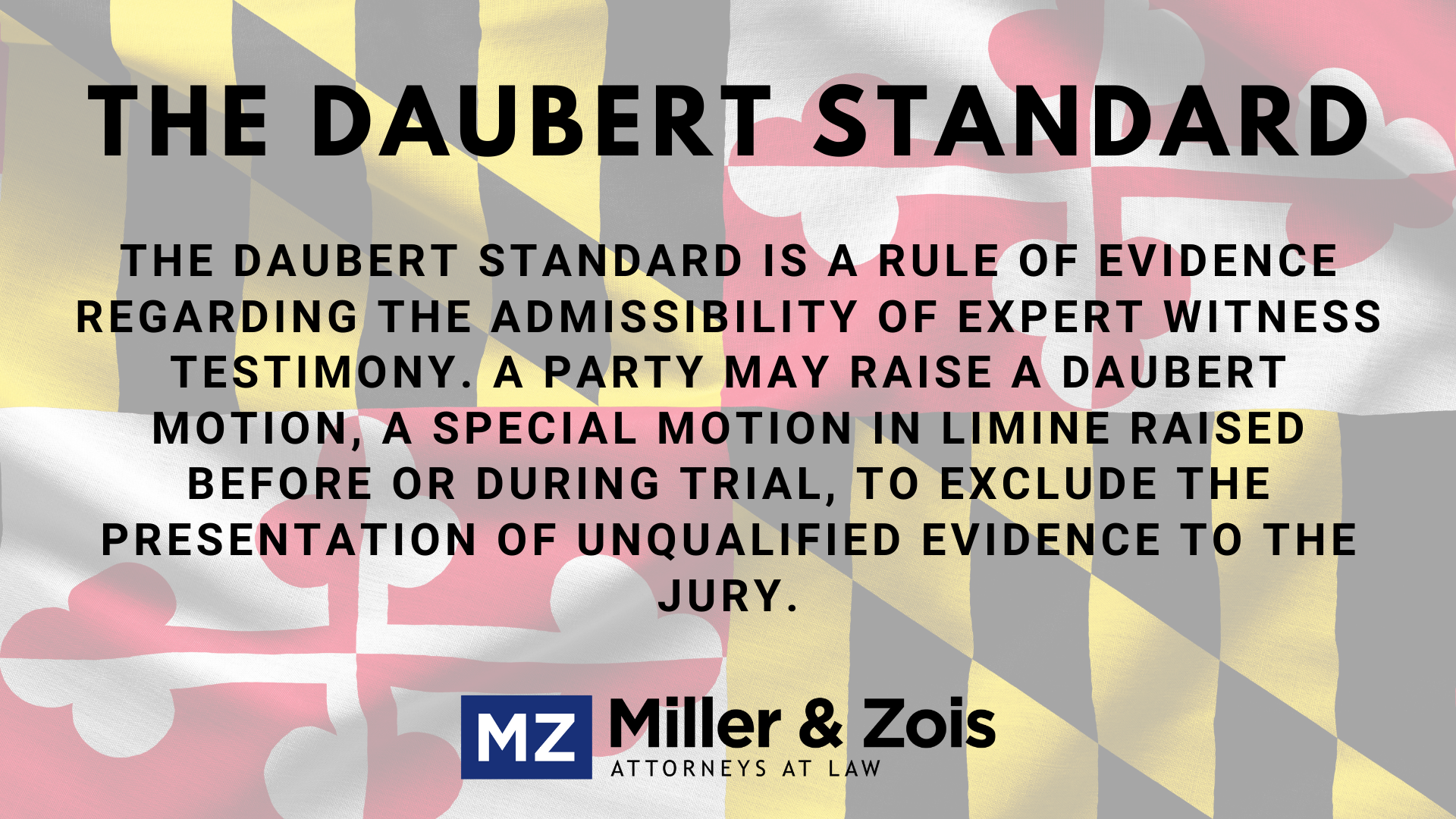 The rule itself adds to the confusion.  There are 10 factors.  Okay.  But they have varying weights that judges can just ignore if they choose.  How many trees will be lost in the motions and appeals interpreting this rule that are coming? (2021 Update: the legislature is looking to codify this new rule.)

I don’t think it will have a huge impact on my practice.  I don’t see this impacting many medical malpractice or motor vehicle accident cases.  But we have other tort cases that will be directly impacted, and some defense lawyers will excitedly fuse Daubert arguments into malpractice and accident cases, too.  I don’t think the end result will be different.  But it might be a longer walk to get there.