The reason women do not report sexual harassment is their fear of retaliation from the harasser and her employer.  This is particularly true when the harasser has a position of power within the organization.

Juries are made up mostly of people in the workplace.  So they get it.  Jurors often side with the victim in discrimination cases where there is evidence of retaliation for reporting sexual harassment and the organization did nothing to stop it.

There are two types of workplace harassment under federal law:  sexual harassment and retaliatory harassment. This post focus on retaliation.

What Does Retaliation for Reporting a Sexual Harassment Claim Look Like?

The most common form of sexual harassment retaliation is mistreatment other than firing.  The boss is accused of sexual harassment. People either like the boss or want to curry favor with him.  The result is that people stop talking to her, stop including her in professional and social aspects of employment that we all value.

The second most common form of retaliation for sexual harassment is the loss of economic and promotional opportunities.  What often happens is that the employer starts looking for pretexts to find fault with the employee that was sexually harassed, raising the bar for what is required of her beyond what it was in the past or what it is for other employees.   If you have ever supervised anyone, you get it.  You can always fight fault with employees and you can always elevate the significance of mistakes if you are looking to railroad someone.

Where Is the Law on Sexual Harassment Retaliation?

How Do You Establish a Hostile Work Environment Because of a Sexual Harassment Report?

To prove a sexual harassment victim faced a hostile work environment, she must show that the actions taken against her were sufficiently “severe or pervasive” to the point of creating an abusive environment.

Is this a fine line?  It is a very fine line.

How Do You Prove a Retaliation for Sexual Harassment Claim?

There is rarely direct evidence of retaliation. You do not see a lot of smoking gun “I fired her because she reported sexual harassment” emails are out there.  But an inference of retaliation can properly be drawn from suspicious timing, ambiguous statements oral or written, behavior or comments, and other bits and pieces.

Moreover, the Fourth Circuit, which covers Maryland, has found that to prove retaliation “very little evidence of a causal connection is required to establish a prima facie case, and mere temporal proximity is sufficient to demonstrate causality.”

After this initial showing is made,  the burden of proof goes to the employer who must articulate a nondiscriminatory reason for the adverse employment action that was taken.  Assuming the employer can do this, the burden shifts yet again to the victim to prove that the employer’s reason was a mere pretext for discrimination.

What Is an Adverse Employment Action? 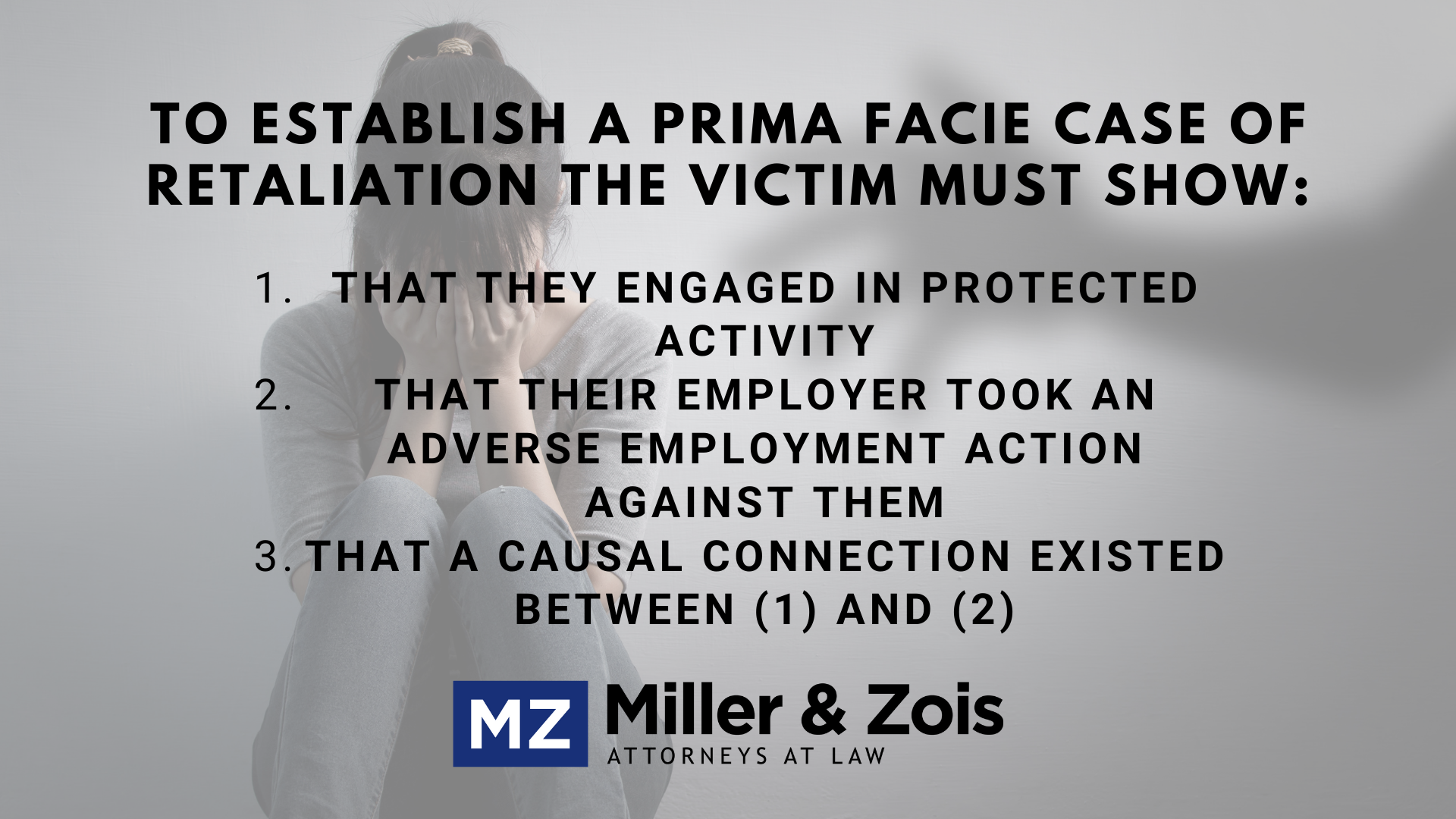 Can I Get Punitive Damages for Sexual Harassment and Retaliation?

The Fourth Circuit has ruled that certain questions should be weighted to determine if an employer’s actions justify punitive damages: