Anyway, the Maryland Court of Appeals recently decided a Sutton-Witherspoon v. S.A.F.E Management, a case that is factually interesting to almost all of us in Baltimore.

A family travels from their home in Columbia to Baltimore to celebrate the Baltimore Ravens’ victory at Super Bowl XLVII. They park at the corner of Conway and Light Street and to the intersection of Pratt and Light Street to watch the victory parade.

Because this is how we roll in Baltimore, the parade started about two hours late. The mother hangs back from the family, staying on Pratt Street until the last vehicle — carrying Ray Lewis, of course — passes. The family goes back to their car and then walks down Conway Street to the Camden Yards warehouse.

The crowds are pretty well-behaved but much larger than expected. So the fire department makes some evacuations. A helicopter flew over to announce to the crowd that M&T Bank Stadium was being closed down.

Of course, no one paid much attention to the fire hazard and kept walking towards the stadium. When the evaluation of the stadium began, the mother and her eight-year-old son were trampled. I’m not sure how serious the injuries were. The opinion (and the briefs) were silent on the scope of the plaintiffs’ injuries. I know they received first aid at the stadium and then went to the hospital.

Plaintiff’s lawsuit claimed that the Ravens, the Stadium Authority, a management company alleging a “duty of care to operate functions at M&T Bank Stadium, with due regard to attendees.” The lawsuit claimed that as business invitees, the defendants owed a duty to “use reasonable and ordinary care to maintain the premises in a sage condition, to exercise reasonable care to protect business invitees, and to warn of existing hazards.”
What should the defendants have done to protect the victims? Plaintiff alleged that they should have more security and better-used barricades and/or other crowd control device and, had they done so, the plaintiffs would not have been injured.

After discovery was completed, the defendants moved for summary judgment. Baltimore City Circuit Court Judge Jeffrey M. Geller granted summary judgment, commenting that “the fatal flaw in plaintiffs’ claims against the various defendants is a lack of notice and opportunity to correct the dangerous condition or warn patrons thereof.”

The Maryland Court of Special Appeals found that there were two key issues in the case. The first is whether the defendants failed to anticipate the enormous crowd size and, once they did, they failed to take reasonable precautions to control the crowd. The second issue is once the enormous crowd arrived, whether the defendants had a duty to warn of a potential risk to the crowd. 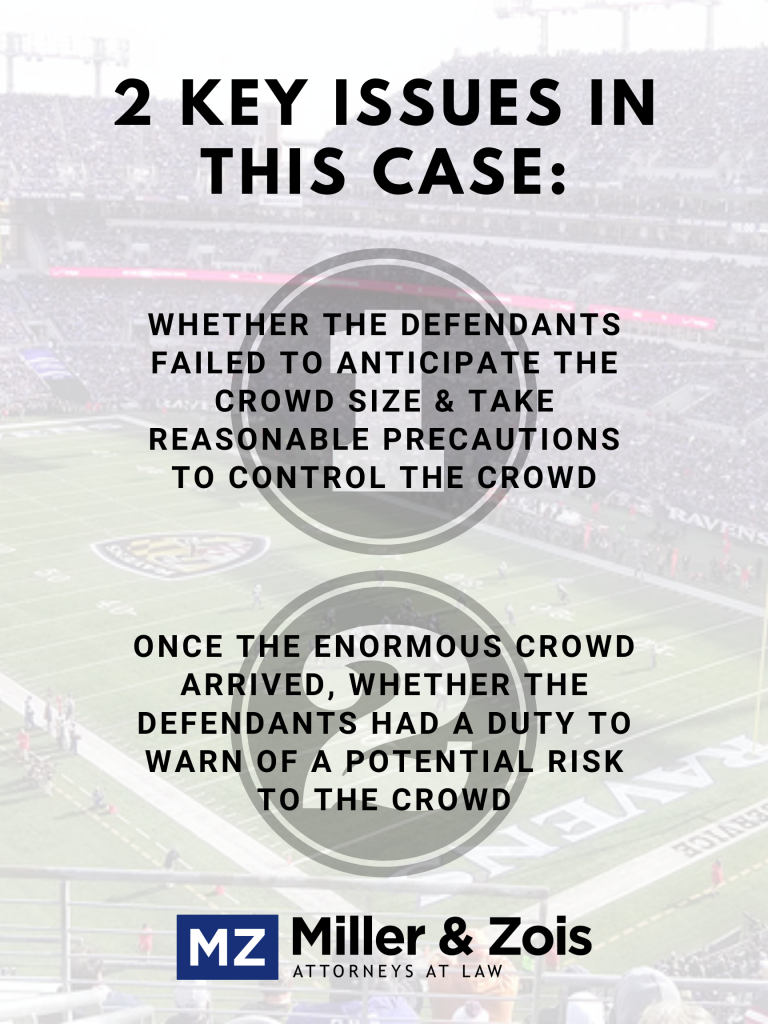 First, the court agreed with the trial court that the plaintiffs are invitees, who are owed the “highest duty” to use reasonable care to make certain the premises are safe.

Second, the court found that the trial court did not address the plaintiffs’ claim that the harm to the victims was caused by a celebration that was likely to cause a large crowd and that the defendants should have planned accordingly. The trial court also did not address the claim that they failed to provide adequate crowd control once it became clear that the crowd was out of control.
So the Court of Special Appeals reversed, remanding the case for further fact finding on whether there is a dispute of fact on this unaddressed issue. The court hints that it believes this question is one of fact for the jury.

I’d be willing to bet that whatever the value of the injuries in the case, the Defendants will overpay to get this case resolved and this case will never resurface.

Normally, I write about cases because there is a legal issue that is explored in the case, one that Maryland trial lawyers need to understand. This case lacks this thread. But there has not been a lot of interesting tort appellate opinion in 2019 and this case involves an interesting tort case and the Ravens Super Bowl win that a pretty embedded memory for a lot of us in Baltimore.