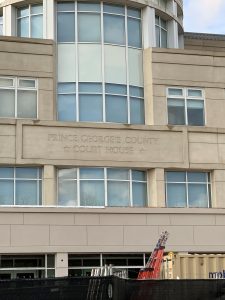 The Washington Post reports that a Prince George’s County jury awarded $5,000 to a WJLA-TV (Channel 7 in Washington, D.C.) Reporter, stemming from an incident where P.G. County police officers detained her briefly at gunpoint, and used excessive force, nearly four years ago. While the jury found that the Prince George’s County police used excessive force, the jury of six men and two women also found that the county officers acted appropriately in conducting a “high-risk” stop of the reporter who was following the Prince George’s County’s chief administrative officer investigating abuse of power allegations.

Plaintiff’s lawsuit alleges that police manhandled her to intimidate her into dropping a probe into the misuse of P.G. county resources. Plaintiff’s lawyers also claimed she dislocated her shoulder and tore her rotator cuff in the incident when police pushed her hand behind her back. The jury rejected both claims in awarding $5,000, a clear rebuke of the Plaintiff’s claim for injuries and conspiracy.

I don’t know that the jury made the right call, that the woman did not suffer an injury. But even without knowing all the facts, it sounds very Oliver Stone-esque to claim that the police were trying to physically bully a news reporter while a cameraman in the backseat was filming the complete thing. Possible? Yes, particularly the fact that she was pulled over while following a county official. But were they physically trying to intimidate her? Hard to believe, although the “I can’t imagine anyone in power would be that stupid” theory has failed before.