With over 53 million Americans owning some brand of a pressure cooker, the safety of the cookers is a huge concern. It is incredibly flexible weapon in cooking. But the rush to grab profits in this competitive market has led some manufacturers to cut corners. Since 2006, many different brands of pressure cookers have been recalled for many reasons regarding their safety. The impact of these recalls and the harm pressure cookers are causing is concerning.  Defective pressure cookers too often lead to serious and avoidable injuries.

A defense motion to dismiss in a pressure cooker product liability case in Florida was granted in part and denied in part earlier this week. The case involves both personal injury claims by four victims claiming they were physically harmed when their Sunbeam pressure cookers exploded, and consumer class action claims. The judge dismissed almost all the consumer class action claims except those based on breach of express warranty. The personal injury tort claims were also allowed to move forward.

What is a “Pressure Cooker”?

Pressure cookers (which include brand names such as Instant Pot and Crockpot) are branded constantly via commercials, magazines, and online ads, anywhere from Alcan Pressure Cookers to Wolfgang Puck Worldwide Cookers. These variously sized cooking machines have taken over the kitchen supply industry.

One uses a pressure cooker to shorten the time frame needed to prepare meals whilst also allowing for the perfect flavor and ingredient combination. A meal that would normally take an hour would only take around half that time with a Pressure Cooker. 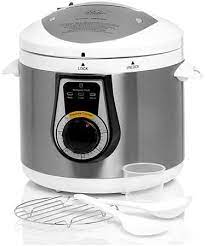 Pressure cookers use hot steam that is pressurized inside of their pots to cook a variety of foods anywhere from soups to roasts. The use of pressurized hot steam makes for faster cooking times while keeping the food hydrated and tender. Famous for this quick-cooking, these pots come with a huge selection of cooking uses and can be a great addition to any kitchen. Yet not everyone has the same taste-pleasuring and instantly prepared experience of using pressure cookers.

How Should Pressure Cookers Work?

Electric pressure cookers work by producing hot steam by applying strong heat directly to the liquid contents of the cooking pot (e.g., broth or water). When the heat is applied, the pot section of a pressure cooker should have an airtight seal, allowing it to function as a pressure chamber. The steam created from the applied heat to the liquid contents rapidly raises both the internal air pressure of the pot, the air temperature inside the pot and thus the food inside the pot. This enables the temperature within the pot to quickly climb over the regular boiling point reaching temperatures exceeding 200°F.

According to the United States Consumer Product Safety Commission (CPSC) there has been a pressure cooker recall on pots made with faulty gaskets which allow for accidental explosions, poor insulation of the pot’s materials leading to electric shocks, and faulty pot seals which allow for content spills, all while pressure and temperature are extremely high.

All these issues stem from a lack of properly installed and necessary safety features. Whether used improperly or made incorrectly, pressure cookers have been causing serious injury to their users by permanently impacting their quality of life.

Additional Pressure Cookers with defects and or recalls include:

The most common of these injuries are second-degree burns which can lead to infection and amputation.

Pressure Cooker Lawsuits Have Been Filed

Many personal injury lawsuits have been filed against pressure cooker manufacturers by users who have been seriously injured by one of the devices.

Anyone who has experienced serious injuries as a direct result of recalled or defective pressure cookers (whether by faulty wiring or seals) may be entitled to compensation.

Hiring a Lawyer for Your Pressure Cooker Lawsuit

Our personal injury attorneys are presently accepting new cases from anyone who has been severely burned or wounded due to a faulty pressure cooker device. Instant pressure cooker users who were burned or injured may be entitled to financial compensation. To learn if you can file a defective pressure cooker lawsuit, call us at 800-883-8082 or get a free consultation online.