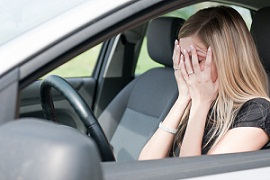 Many years ago, a jury awarded my partner Laura Zois’ client $4 million in a survival action claim.  The sole evidence — the SOLE evidence — presented to the jury was that the decedent said “Oh s—!” before impact which caused his immediate death.  Since that case, I have had a very aggressive view when it comes to pushing these claims.  Because that case and other cases I have seen and tried show that juries take the most remote fear of grave harm or death as serious as they do any conscious pain and suffering.   I think too many plaintiffs’ attorneys in Maryland are too quick to accept the premise that the victim’s estate cannot make a pre-impact fright or conscious pain and suffering claim.   This post is about Maryland law in both pre-impact freight and conscious pain and suffering cases and why I think this helps the family’s victim recover substantial damages in wrongful death and survival action claims in Maryland.

Pre-impact fright claims seek compensation for damages that are recoverable when the decedent experiences fear of harm during some legitimate window of mental anxiety.   Maryland Pattern Jury Instruction Number 10:10, Compensation for Pre-Impact Fright, sets the damages a jury should consider in giving an award for the emotional distress and mental anguish that the Plaintiff endured from between the time of the realization of imminent harm and the harm.

Most of us have felt a moment — whether or not it happened — that a car accident was imminent.  Usually, you have stopped and you see or hear a car in your rearview mirror.   Usually, it turns out well.  We pull off the road — which I have done at least a half dozen times to save myself — or the would-be rear-ender gets those breaks down in time.  This is not compensable and usually, you get over it pretty quickly.  The question is what happens when a victim sees his own death or serious harm may be imminent and it happens just like that?

The Maryland Court of Appeals addressed this issue head-on in Benyon v. Montgomery, 351 Md. 460, 718 A.2d 1161 (1998), which is the seminal Maryland case on pre-impact fright.  Here, the 19-year-old decedent knew for maybe five seconds that a tractor-trailer would hit his parked truck.  He may or may not have known this would lead to his death.  For almost sure — that’s a legal term, right? —  he knew the potential impact posed a substantial risk of grave bodily harm.  He may have feared for his death.

The Maryland Court of Appeals opined that upholding the recoverability of pre-impact fright as an element of damages is consistent with the intent of Maryland law.   The issue is ultimately what evidence shows conscious pain and suffering.    To me, logic and reason demand a finding that a person who most likely saw that his safety was in peril, should be enough.   Benyon addresses this, finding that while there was no direct evidence of pre-impact fear,  jurors had evidence to conclude pre-impact fear.   The big thing, in that case, was skid marks.  This is good evidence, but it has been warped by argument into being a necessity to make the claim.  That is not the case.  If a tractor-trailer is coming at you at full speed and you most likely saw that, I think that is enough under both the letter and spirit of Maryland law.

In fact, medical evidence is all you may need. If your expert says that it is more likely than not that the victim suffered, the case should go to the jury.  As it should, Maryland law gives great deference to the jury in its calculation of conscious pain and suffering damages.  Going back to where we started, I think juries value these claims much higher than many lawyers on either side of the aisle suspect. Why?  I do not know for sure.  But I do know that,  unlike the wrongful death claim,  it is the only claim that the victim gets to make on her own behalf.  That seems to matter to jurors.