The Court of Special Appeals of Maryland issued an opinion yesterday with Mayor and City Council of Baltimore v. Hart.  Here, the plaintiff was injured when a Baltimore City police officer ran a red light. The City of Baltimore’s attorneys contended, however, that the police officer had the right to go through the red light since he had his siren and emergency lights on and he was responding to an emergency. 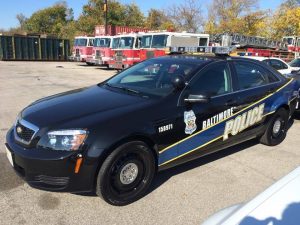 The Facts of the Case

Plaintiff testified at trial that as he approached the intersection, the traffic light turned green.  As he entered the intersection, the police officer’s vehicle struck him.   A witness motorist, who was on Madison Street behind the Plaintiff, agreed that as the vehicles approached the intersection of Madison and Wolfe, the light turned green.  Another witness, who was also on Wolfe Street and behind the police car, confirmed that the officer ran the red light without stopping.  The officer did not recall the color of the light.   I think we all know what happened here.

The Baltimore City attorney filed a motion in limine to prevent the accident victim’s attorney (one of which was Irwin Weiss, a well-respected lawyer in Baltimore County) from introducing the Police Department General Order No. 11 which set for relatively strict standards for the police officer’s duty of care in going through an intersection like the one at issue in this case (the intersection of Madison and Wolf Streets in Baltimore City). Instead, Baltimore’s lawyer argued that the Maryland Transportation Article § 21-405 applied, which applies less stringent standards.

The trial court not only allowed the admission of the General Order but also allowed the relevant portion to form one of the jury’s instructions. The jury returned a verdict in favor of the injury victim, awarding damages of $46,894.05. The portion of the judgment entered against the City was $20,000 (the maximum recovery by Maryland law because the police officer was responding to an emergency). They entered the rest of the judgment against Allstate Insurance Company under the injury victim’s uninsured/underinsured motorist policy.

The City’s lawyers appealed the trial court’s decision to allow the accident victim’s lawyer to refer to the general order and its use as a jury instruction.  The crux of this appeal was whether a “general order” of the Baltimore City Police Commissioner, dealing with how emergency police vehicles are to be operated on the streets of Baltimore, is admissible in a car accident case involving an emergency police vehicle.

The Court of Special Appeals of Maryland found that the Baltimore City Police Commissioner’s instructions to officers on safe driving practices as articulated in Baltimore Police Department General Order No. 11–90 was properly admitted as evidence by the accident victim’s attorney. The court specifically rejected Baltimore’s argument that such standards are not admissible under the Maryland Court of Appeals decision in Richardson v. McGriff, 361 Md. 437 (2000).

In Richardson, they sued a Baltimore City police officer who shot a man who, along with six of his friends, had broken into a vacant apartment in Baltimore City. The court held that introducing police guidelines on the use of deadly force was not appropriate and instead the standard to determine the reasonableness of the police officer’s use of lethal force should be determined by examining the circumstances of the shooting, i.e. the reasonable man test. But the Hart court distinguished the guidelines in Richardson as discretionary and subject to the officer’s judgment at the moment, but the traffic guidelines were more specific guidelines that the police officer should have followed.

What We Get From This Case

The take-home message is the police and other emergency vehicles can escape liability in Maryland only when they are truly in an emergency that required extreme measures.  State and local governments cannot wave an emergency wand and expect relief unless latitude is necessary because of the emergency at hand.