Pitocin is a prominent subject in many birth injury lawsuits.  Our lawyers frequently see induction with Pitocin and then a later complication with the mother or the child.

Pitocin is a hormone drug that doctors give to pregnant women to help induce labor and speed up the process of delivery. Pitocin is the most common method of inducing labor and it is widely utilized in hospitals across the country.

I see cases where the misuse of Pitocin may have contributed to the child’s injury.  But we also get cause where the mother suspect Pitocin was misused yet it turns out that another mistake unrelated to Pitocin was made to cause injury to the child or the other.  Why is this?   The parents often suspect Pitocin because it is the thing they know the mother received.  Sometimes, I see cases where the Pitocin was misused AND some other malpractice occurred that is the real source of the injury or death.

Pitocin is a synthetically manufactured copy of a hormone called Oxytocin. Oxytocin plays a key role in childbirth. At the end of pregnancy when the baby is ready to be born, the mother’s body starts releasing large amounts of oxytocin. The sudden release of oxytocin causes the mother to go into labor by stimulating her uterine muscles into contractions. The continued release of oxytocin triggers the release of prostaglandins make the uterus contract more intensely and more frequently until the baby is delivered.

Pitocin is simply a synthetically manufactured version of the oxytocin hormone. Doctors or nurses administer Pitocin through an IV drip where it is rapidly absorbed into the mother’s bloodstream. Once in the mother’s system Pitocin causes the same physical response as Oxytocin. It triggers contractions of the muscles in the uterus. Pitocin is very effective and is frequently used to either kick start the labor process or to accelerate the labor that moving too slow.

When and How Is Pitocin Administered? 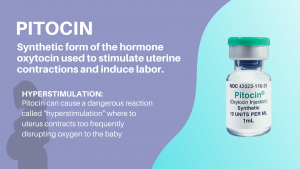 Pitocin is administered intravenously through a vein in the mother’s arm. Initially, very low levels of synthetic hormone are introduced. Then the levels of Pitocin will be gradually raised until contractions are about 2-3 minutes apart. Normally the Pitocin drip will be continued until the baby is delivered.

Pitocin cannot be given to induce labor unless and until the mother’s cervix is ready. Prior to labor and delivery, the cervix remains thick, closed and facing “backwards” towards the birth canal. This is necessary to help keep the baby and the womb in place during pregnancy. When the mother’s body starts gearing up for labor, the cervix starts to soften and gradually open. The cervix also rotates “frontwards” (effaced) to facilitate the baby’s entry into the birth canal.

Inducing labor with Pitocin is not an option until the cervix is ready, because Pitocin does accelerate cervical ripening. Progression or “ripening” of the cervix in preparation for childbirth is rating using a Bishop’s score. The score must be a 6 or above before Pitocin can be used to stimulate contractions.

Hyper stimulated contractions can be very harmful to the baby. Until the baby is actually delivered, it remains dependent on the supply of maternal oxygen through the placenta. During labor, the placenta gets briefly compressed during a contraction. This compression of the placenta restricts the flow of blood and oxygen to the baby until the contraction ends. The rest time in between each contraction is therefore very important because they give the baby a chance to get oxygen before the next contraction.

If hyperstimulation occurs contractions can become so strong and frequent that the baby is not getting enough oxygen. Oxygen deprivation or reduction during childbirth is extremely hazardous to a baby. Even a short deprivation of oxygen during birth can cause major damage to the baby’s brain and lead to permanent disabilities such as cerebral palsy.

I see a lot of birth injury cases involving the negligent administration of Pitocin by doctors or hospital staff. The allegations of medical negligence in these cases tend to be very similar. Most of the cases involve allegations that the defendants failed to recognize the signs of hyperstimulation and continued to administer Pitocin despite fetal distress signs. Below are summaries of recent birth injury cases in which misuse of Pitocin was the primary theory of medical negligence.

If your child suffered a birth injury that may have been related to the negligent use of Pitocin and hyperstimulation, you may have a claim for medical malpractice. Contact the birth injury lawyers at Miller & Zois for a free case evaluation at 800-553-8082 or here online.