The Maryland Court of Special Appeals addressed last week an issue that our personal injury clients in malpractice and accident cases have occasionally expressed: is my settlement or verdict my money or marital money I have to share with my spouse?

In Murray v. Murray, the court was faced with, ironically I guess, a lawyer who had settled after suing her former law firm alleging that the firm engaged in discriminatory and retaliatory practices in firing her. (I would have been interested in learning more about the underlying lawsuit.) You know the rest of the story. The settlement came after she and her husband separated, but before they divorced, and the lawyer spouse wanted all the money for herself.

The Maryland Court of Special Appeals found that the portion of a settlement that compensates a claimant spouse for lost wages or earning capacity during the marriage, medical expenses paid from marital funds, or for joint loss of consortium, is marital property subject to fair distribution. Pain and suffering 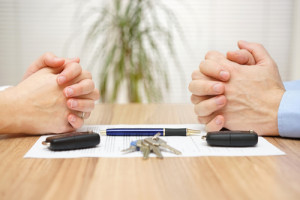 damages are not marital property.

This is an easy enough rule to formulate, but there is a problem in its application. Personal injury settlements do not divide between economic and non-economic damages. This issue is one that personal injury lawyers frequently tackle in a variety of contexts, most notably, in dealing with medical liens. How much of the settlement was for medical bills? The insurance company does not (and cannot) delineate.

The Maryland rule the court underscored in Murray is that it is for the finder of fact to determine how the settlement should be apportioned. Interestingly, the trial court rebuked the Montgomery County trial judge who found that the husband, in this case, did not prove any of the property at issue should be classified as marital property:

In its Opinion and Order, the court found that the settlement agreement did not
“delineate what the $550,000 represents, other than a settlement.” Ironically, it blamed
[Defendant] for failing to carry his “burden to identify and value the [proceeds] he seeks to classify as marital,” concluding “there simply is no credible evidence from which the court can conclude that this sum is marital.” [Defendant] complains that his cross-examination into the status of the settlement funds was unduly restricted. We agree.

The take-home message for Maryland personal injury lawyers advising clients is that you cannot give them a definitive answer to how much their spouse will get out of their settlement. But you can tell them that the spouse gets half of any part of a settlement that is determined to be for (1) present or future lost wages incurred during the marriage, (2) medical bills, and (3) joint loss of consortium. The plaintiff spouse gets to keep their own pain and suffering damages, which should be the largest portion of most personal injury settlements. How to apportion what part of a settlement falls into what category is a subject of the argument until it gets to a finder of fact who is required to engage in the difficult task of apportioning the settlement.

You can find the full case here.