Our lawyers have high hopes for the Paraquat lawsuit.  Our attorneys are handling these claims in all 50 states.  Our attorneys believe the science strongly supports the premise that Paraquat exposure causes Parkinson’s disease.

As our lawyers discuss below, the Paraquat Parkinson’s disease lawsuit may have higher projected individual settlement amounts than any other mass tort in the country.

Paraquat is universally recognized as one of the most dangerous and highly toxic chemicals in the world. No one disputes this. Paraquat is so highly toxic to the human body that drinking just a tablespoon of it can be fatal. This extreme toxicity (along with environmental concerns) has prompted over 30 countries to ban Paraquat entirely.

In the United States, for reasons that defy logic and reason, this toxic chemical is not banned and it has become one of the most widely utilized herbicides in the agriculture industry.  It is so dangerous you need an applicator license to purchase the chemical.   So the question is not why are there Paraquat lawsuits but what took so long?

But now new evidence has revealed that prolonged exposure to Paraquat fumes can health risks that include cause Parkinson’s disease. This discovery might end up being the nail in Paraquat’s coffin. Thousands of lawsuits are now being filed by individuals who used or were exposed to Paraquat and subsequently diagnosed with Parkinson’s disease. There is also a new push in Congress to get Paraquat banned.

Paraquat is an industrial strength herbicide that is strictly regulated and sold only to licensed applicators. Paraquat is sold under the brand name Gramoxone in the U.S. and it is also sold as Paraquat. It is not a component in any other products.

The volume of new Paraquat Parkinson’s disease lawsuits appears to be reaching new heights this month. During the first week of May 2022, 57 new Paraquat lawsuits were added to the Paraquat MDL (the highest number of new cases in a single week). Another 35 new cases were transferred to MDL during the second week in May. Why more Paraquat lawsuits?  I think more people are learning of the possible connection between their Parkinson’s disease and their exposure to Paraquat.

In the 12 days since the last monthly status conference on April 1, a total of 44 new cases have been transferred into the Paraquat MDL. If this pace of keeps up it will make this the highest volume month yet for new Paraquat lawsuits. Meanwhile, the parties submitted their bellwether case selections to the judge last week and those should be made public in the next few weeks.

On April 1st, the MDL Paraquat class action judge will hold a status conference to assess where the litigation is going and how to best move the bellwether lawsuits forward for trial starting in November 2022.

In March 2022, there are now over 700 Paraquat lawsuits filed in the MDL class action.

Last month, in a major win for victims, the MDL Paraquat class action judge denied the defendants’ motion to dismiss the Paraquat lawsuit because of the statute of limitation, statute of repose. preemption, and a host of other spaghetti on a wall defenses.

In January,  the MDL judge in the Paraquat class action lawsuit issued an order confirming a group of 16 Paraquat cases for the first round of bellwether test trials, which are scheduled to start in November 2022.  Half of the 16 bellwether cases were selected by the plaintiffs and the other half were picked by the defense out of a larger pool of candidates. The bellwether cases will be tried in the Southern District of Illinois.

In a December 3, 2021 case management order (CMO No. 12), the judge ruled that a starting group of sixteen Paraquate lawsuits cases will be selected to prepare for trial.  Lawyers representing victims with Parkinson’s disease will pick half of those cases.  The Paraquat defense lawyers will pick the other eight. The Parkinson’s disease lawsuits in this group must meet certain basic eligibility criteria.

These initial 16 Paraquat lawsuits will then go through a period of limited fact discovery that will last until March 31, 2022. Once this fact discovery process is finished, the plaintiffs’ lawyers and the defense attorneys will each get to strike two cases from the group for any reason that they want.  Paraquat lawyers on both sides will have until April 8, 2022, to submit a ranking of which Paraquat lawsuits they prefer to be scheduled for the opening trials.

Expert discovery and some additional fact discovery will then be conducted in the remaining group of 12 cases. Once the discovery is finished, the 12 cases will be scheduled for the opening round of Paraquat bellwether trials starting March 2023. 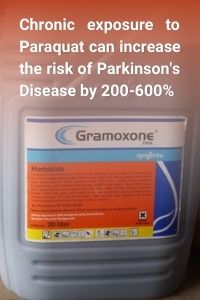 During the 1950s and 1960s agriculture in the industrialized world underwent a “green revolution as new chemical pesticides and fertilizers were developed. These new chemicals tripled agricultural productivity and gave rise to a new agrochemical industry led by global companies such as Imperial Chemical Industries and Monsanto.

Paraquat was a product of this agrochemical revolution. Paraquat was originally synthesized in the 1880s for other purposes. In the late 1950s, however, an R&D team at British agrochemical giant Imperial Chemical Industries (“ICI”) first discovered that Paraquat could be a highly effective herbicide. In 1962, ICI began manufacturing Paraquat as a herbicide under the brand name Gramoxone.

Paraquat (Gramoxone) became very popular and widely used as a weed killer in worldwide agriculture through the 1960s and early 1970s. The use of Paraquat steadily declined around the mid-1970s as farmers started using glyphosate (Roundup) instead. Over the last 15 years, however, Paraquat use has rapidly increased as many weeds have developed resistance to glyphosate. This increase in Paraquat usage has come mainly in the U.S. on soybean fields. Data kept by the Department of Agriculture shows that Paraquat use on U.S. soybean farms has increased by 450% over the last 10 years.

The reason the recent increase in Paraquat use has occurred mostly in the U.S. is that the rest of the developed world has already banned it. The use and sale of Paraquat are prohibited in a total of 32 countries, including the European Union. Even China (a country not exactly known for safety or environmental regulation) recently announced a plan to phase out Paraquat use because of safety concerns. In the United States, however, Paraquat can be bought and used by licensed applicators.

Parkinson’s disease is a disorder causing impaired functioning of the brain and central nervous system. Parkinson’s causes tremors and shaking which gradually evolves into difficulty walking and moving. Other symptoms of Parkinson’s include a gradual loss of muscle control and fine motor coordination. Eventually, Parkinson’s disease leaves individuals unable to talk or walk.

In 2011, a National Institute of Health study was one of the first to find a clear association between the herbicide Paraquat and Parkinson’s. Over the past five years, a flood of scientific research has confirmed that low-level chronic exposure to Paraquat significantly increases the risk of developing Parkinson’s disease. Researchers found that individuals who experienced extended Paraquat exposure as teens or young adults had a 200-600% increase in the risk of developing Parkinson’s disease. A related study found that individuals who lived near a field where Paraquat was used had a Parkinson’s rate “many times higher” than residents who did not live near farms.

The evidence linking Paraquat exposure to Parkinson’s disease is very strong and has led to a wave of Paraquat lawsuits against Syngenta and other manufacturers. The product liability lawsuits are being brought by farmers who used Paraquat and individuals who lived near farms where it was used and were subsequently diagnosed with Parkinson’s disease.

New Legislative Push to Ban Paraquat in the U.S.

The recent evidence showing that chronic Paraquat exposure can cause Parkinson’s disease has prompted a new push to have Paraquat banned in the U.S. There is currently pending legislation (Protection Against Paraquat Act – HR 3817) before the U.S. Congress that would prohibit the sale and use of Paraquat in the U.S. There is also a simultaneous regulatory push to have the Environmental Protection Agency ban the use of Paraquat.

The link between Paraquat and Parkinson’s disease has generated some strong support from advocacy groups who are helping to advance the legislative effort to ban Paraquat.  The Michael J. Fox Foundation (MJFF) and the Unified Parkinson’s Advocacy Council have been at the front of this lobbying effort against Paraquat. The MJFF has been working behind the scenes both in congress and at the EPA to end the use of Paraquat in the U.S. They obtained 100,000 signatures on a petition to the EPA requesting that the agency take action.

The Biden Administration is expected to be much more receptive to the idea of banning the use of Paraquat for safety and environmental reasons. This makes it much more likely that Paraquat may be banned either at the regulatory or legislative level.

Let’s look at a sample paraquat lawsuit to put what we are talking about in context.

A Florida farmer, David Culpepper, recently joined the Paraquat lawsuits.  On December 2, 2021, Culpepper filed a Paraquat product liability lawsuit against Chevron and Syngenta. Culpepper filed his case directly in the Paraquat MDL in the Southern District of Illinois rather than file in his home district (Florida).  Why?  Because, either way, the lawsuit would end up in Illinois because all Paraquat lawsuits in federal court are consolidated in Illinois.

Culpepper experienced 10 years of occupational exposure to Paraquat when he worked as a farmer in Calhoun County, FL during the 1970s and 1980s. While working on the farm during that time, Culpepper personally mixed and sprayed Paraquat to crops regularly. In addition to his 10-years of occupational exposure, Culpepper asserts that he has lived on the same property since 1956 that is surrounded by farms being treated with Paraquat.

Year after his work on farm spraying Paraquat, Culpepper began to experience neurologic problems and in September 2019 he was diagnosed with Parkinson’s disease. Culpepper’s lawsuit alleges that his Parkinson’s disease was caused by his long-term exposure to Paraquat. This exposure was both as a farmer and a resident near farms where it was used.

The product liability attorneys at Miller & Zois are currently seeking new Paraquat cases. If you used Paraquat or were exposed to Paraquat and you have been formally diagnosed with Parkinson’s Disease, you may have a valid Paraquat lawsuit.  Our Paraquat lawyers are mostly looking for victims who suffered commercial exposure.  But our law firm wants to speak with you either way.  Contact us today for a free case evaluation at 800-553-8082 to see if you qualify for a Paraquat lawsuit or reach out to us online.