Our lawyers are bringing Paragard lawsuits in all 50 states.

The Paragard IUD is an intrauterine contraceptive device made by Teva Pharmaceuticals.  It was discovered that a design defect in the Paragard was causing the IUD device to fracture during removal, leaving shattered pieces floating around inside the uterus. Our Paragard lawyers are handling only injury during IUD removal claims.

Over one thousand women who have been harmed by this defect are filing Paragard lawsuits. A Paragard class action lawsuit has been formed.

In this post, I will try to answer the questions victims have about where these suits will go and the expected settlement amounts for a Paraquat lawsuit.I also predict whether the litigation will be successful, who qualifies as a plaintiff, and how when victims might expect a Paragard settlement.

The pace of new Paragard IUD lawsuit filings has slowed down recently. But as we talk about in our update below, more new lawsuits were filed in June after  Paragard lawyers filed only two new lawsuits in April and five in May.   If you have a Paragard lawsuit you want to file, now is the time to reach out to us.

Paragard is an intrauterine device (IUD) that is a highly effective contraceptive. The Paragard was originally developed by CooperCompanies, but Teva Pharmaceuticals later acquired all rights to make and sell the Paragard IUD.

The Paragard is a traditional “copper IUD” device. It has a small copper coil wrapped around a flexible plastic body that is about the size of a quarter. The Paragard is implanted at the very base of the uterus by a doctor, where it is supposed to stay in place until removed.

Once inserted the Paragard prevents pregnancy by slowly releasing small amounts of copper from its coil. The copper prevents the fertilization of the egg. The Paragard is one of the most reliable and effective contraceptive devices. It is almost 100% effective a preventing pregnancy and it lasts for 10 years.

One of the main advantages of the Paragard IUD is that it was supposed to be quick and easy to remove at any time. The Paragard is designed to be removed by a doctor in a simple outpatient appointment.

Over the last several years, it has become apparent that the Paragard has a design flaw that makes the IUD prone to fracturing when the doctor attempts to remove it. The Paragard has T-shaped arms at the base that hold it in place. These arms are designed to flex upward and allow the device to be pulled out.

The problem is that the retainer arms of the Paragard lose their flexibility and become brittle over time. As a result of this loss of flexibility, the Paragard arms often snap off instead of bending upwards when the device is pulled out. When the Paragard arms break off during removal, they frequently get embedded in the uterus wall where they cause all sorts of serious health problems including chronic abdominal pain, pelvic inflammation, infection, and infertility.

Eventually, several studies were published which alerted the public about the problems with the Paragard arms fracturing during removal. This quickly led to a stream of Paragard lawsuits by women who were injured when the arms of the Paragard broke off during removal.

In January 2020, there were enough Paragard lawsuits pending in the federal courts to prompt the formation of a new Paragard MDL in the Northern District of Georgia. There are currently over 60 individual cases in the Paragard MDL and more cases are getting filed regularly.

What Can We Expect in the Paragard Class Action MDL? 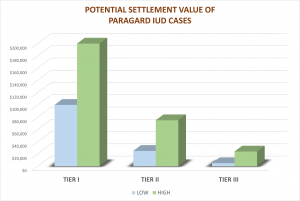 In a “class action” MDL involving product liability cases, hundreds or thousands of individual lawsuits are consolidated for pre-trial discovery. The consolidated discovery phase in the Paragard MDL will probably last about 16 months. At the end of the discovery phase, a few cases are carefully selected for “bellwether” jury trials.

The results of these bellwether test trials are then used to facilitate some type of negotiated resolution of all the remaining cases in the MDL. If the first 2 bellwether trials in the Paragard MDL results in big verdicts for the plaintiffs, the defendants will most likely seek to negotiate a global settlement of the remaining claims.

This would likely involve a tiered settlement structure in which each individual case is categorized in a tier based on the severity of the plaintiffs’ injuries. Then each case gets settled for a set amount of financial compensation which varies based on what tier the case is in. Top-tier lawsuits get the highest settlement payout.

What Is Happening with the Paragard Lawsuit in July 2022?

Our Paragard lawyers have seen spate of new Paragard lawsuits filed. In the last month, 177 new Paragard IUD lawsuits were transferred into the MDL class action. As of June 15, 2022, there were 1,195 plaintiffs in the Paragard class action lawsuit. Why the rush of filings? It is hard to say.

Yet things are still moving slowly with the Paragard class action lawsuits. There has not been the progress you would hope for after a year-and-a-half. We are far from our first Paragard trial.

What Will the Settlement Payout Be for Paragard IUD Lawsuits?

At this early stage of the litigation, it is impossible to accurately estimate what the final settlement value of these cases might be. All we can do at this stage of the game is make an educated guess based on what similar mass tort cases have settled for in the past.

How solid are these Paragard settlement payout predictions?  They are not solid.  At this stage of the litigation, our lawyers are optimistic about the cases and these projections reflect this optimism.

If you had a Paragard IUD device that broke or fractured during the removal process (or while implanted) you probably have a valid claim for financial compensation. Our medical device injury lawyers can help get your Paragard case filed before it’s too late.