If you are a lawyer with a nursing home bed sore client in Maryland, I want you to refer your case to Miller & Zois (with an attorneys’ fee-sharing relationship).  This post is directed to lawyers who 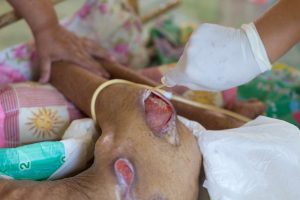 rarely handle bed sore care to better understand the pros and cons of bed sore nursing home claims in Maryland and what types of claims are the most viable.

A cousin of this effect is how the medical records in nursing home cases read. Doctors in medical malpractices instinctively cover for each other.  Autopsies and subsequent treatment notes are written with malpractice considerations in mind.  Make no mistake about it. As bitter as I often get about this, I understand the instinct to protect your own.  If I don’t protect this doctor who might be accused, the thinking goes, who will protect me when I get blamed for something?  In nursing home cases, doctors are more willing to blame the nursing home for poor care. When a patient gets harmed or killed by malpractice by someone other than a doctor, it makes doctors mad.

Another driving force that makes nursing home cases so appealing is that it terrifies these nursing homes to go to trial.  These cases almost always settle before trial.  So if you are a lawyer willing to go to trial and you have a track record of success to support that willingness besides just bluster and the result is often a very favorable settlement.

Finally, bedsores should not get out of control in the absence of negligence. Yeah, yeah, it CAN happen without negligence, a fact that every single defense expert in nursing home cases is quick to point out.  But those cases are exceptions that usually jump off the page based on distinctly unique facts.  Most bedsore cases are because the nursing home screwed up.

The Downside to Nursing Home Cases

There are two significant downsides to nursing home cases.  The first is that the best-case scenario for damages in these cases is often shy of $1 million. There is rarely any economic damages because there is rarely any required future care connected to the malpractice and nursing residents rarely have future projected earnings in wrongful death cases.  So the bar to take a case is higher than it would be for a case with a greater upside.  Also, in non-death cases, because the victims are older, they often die of unrelated causes after the negligence.  Trying to collect pain and suffering damages by the victim’s surviving family is an uphill battle.

The second problem is that causation is more frequently a challenge with an older patient population. By the time we get to the nursing home age, there are usually other health considerations.  So there is often a question of causation regarding what caused the death.  Was it the bedsore or was it the patient’s uncontrollable diabetes?   These issues always arise in these cases, which means you are battling not only on the negligence front but on causation.

Bedsores, also called “pressure sores” and “decubitus ulcers,” are usually mentioned in medical records by grade or stage to classify the degree of tissue damage.  Stage I is characterized by redness of intact skin.  It is not a big deal, but when left untreated in a harbinger, there are problems to come. Stage II is defined as partial thickness skin loss involving the epidermis and/or dermis. Stage III involves full-thickness skin loss involving damage or necrosis of subcutaneous tissue, meaning it has eaten through both layers of skin.  Stage IV as full-thickness skin loss with extensive destruction, tissue necrosis or damage to muscle, bone, or supporting structures.  Some doctors use the term “unstageable” which means they are beyond Stage IV.

Nursing home negligence can cause bedsores staged in the first three grades of bedsores.  Are there bedsore cases worth filing in Maryland?  The answer, generally, is no. This is, understandably, maddeningly frustrating because a patient can really suffer from a Stage II or Stage III pressure sore.  But from a nursing home lawyers’ perspective, Maryland law rarely makes the juice worth the squeeze economically.

Juries find it maddening when nursing homes do not follow their own protocols or the employees do not follow the doctor’s instructions.  The big problem with bedsores is not failing to identify the problem or develop a plan to resolve the issue.  The larger problem is failing to follow the plan already in place.  Often you will see orders to have the patient turned every two hours that just get completely ignored. Doctors will order that special heel protectors be applied to the feet and special padding can be applied to the bed to decrease pressure to sensitive areas of the skin and the nursing home employees will just shrug their shoulders.

Bedsores look awful.  Every single time I see pictures in these cases it is like I’m seeing it for the first time.   No kidding, I saw pictures today, and I was convinced they were the worst pictures I have even seen.  It must be the 10th time this year I have made such a proclamation. Juries have the same reaction.  Good pictures can really make a case.

Regarding the value of nursing home cases in Baltimore City and Prince George’s County, the settlement value of your claim is higher.  Certainly, there is a great deal of variation in the other 23 counties in Maryland.  But there is no question there is a large gap between these two best jurisdictions and all the others.

Getting a Lawyer or Co-Counsel

This is not an exhaustive list of the variables that matter in these cases.  But if you are strong in most of these categories, the likelihood is that you have a strong case. If you have questions about your case, I’d be glad to speak with you.  Call me at 800-553-8082 or reach out to me online.