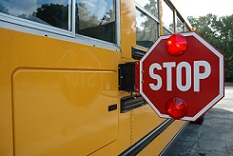 The Maryland General Assembly 2011 passed one bill passed that I support.

Local municipalities may now use cameras to catch motorists speeding past stopped school buses. Violators will get a ticket with a penalty of up to a $250 fine, but no points on their driving records. Montgomery County has had cameras in place for a while. But they were just giving out warning tickets. This bill has some teeth, albeit little baby teeth with no points attached.

This bill was precipitated in part by a Maryland State Department of Education study that found that thousands of drivers in the state are passing school buses with their stop arms extended and their red lights flashing. A total of 7,028 violations were recorded on a single day last month, most drivers ignoring school bus stop signs.

Nearly 4,000 (3,997) of those motorists were oncoming drivers who ignored the stop arm, 2,665 drivers moved past a stopped bus on the bus driver’s side of the vehicle, and 366 drivers passed a stopped bus on the door side, right where you would expect a child to be walking. Baltimore County drivers are the worst offenders, followed by Montgomery County, Baltimore City, Anne Arundel, and Prince George’s.

(Now keep in mind, all of this data comes from school bus drivers who, as a breed, think we are all idiots and don’t belong on the road. So let’s say they are exaggerating by a factor of 10. It is still a staggering number.)

This is the Maryland law in 2021 regarding passing school buses that are flashing red lights.

Maryland Transportation Code § 21-706 has not been addressed by Maryland appellate courts in nearly 60 years but it was updated in 2019.

There have been two Maryland cases interpreting this law.  In Chackness v. Board of Education of Harford County, 120 A.2d 392 (1956),  a guy driving a Cadillac convertible passed a bus and hit a child on Route 1 in Bel Air.   Awful.  I have a black-and-white image of the whole thing in my head.

Anyway, this Caddy driver tries to bring in the bus driver (who Google tells me died in 2010 and has a son who is a lawyer) and a 14-year-old school bus safety, claiming they were also negligent.  The argument?  The ole “sudden stop” claim.   The court dismissed the claim pretty easily.  The bus driver was defended by William B. Somerville of Smith Somerville & Case fame.

The second case, Jubb v. Ford, 157 A.2d 422 (1960), is an odd case involving a “sort of” school bus that was not large enough to be a school bus and did not have flashing red lights.  The court found that it did not seat 10 or more kids because there was no evidence that its carrying capacity was greater than eight and that it would violate the law if the vehicle used red flashing lights.  This case also had Smith, Somerville & Case defending the case and Judge Frank Cicone representing the plaintiff.  These old cases feel like a who’s who of Maryland legal history.

How Far Behind a Bus With Flashing Red Lights Do You Stop?

The statute, § 21-706, requires you to stop your car at least 20 feet before reaching a stopped school bus with flashing red lights.  This is the law whether the bus is on  your side of the road or the opposite side of the road (or at an approaching intersection).  If you are smart and it makes sense, you extend that 20 feet to 30 or 40 feet.

Either way, the bill passed the Maryland Senate 38-7 and the House of Delegates 124-14.