The Maryland Court of Appeals decided today GEICO v. Comer, another appellate case that dives into the Serbonain Bog of whether uninsured/underinsured motorist coverage kicks in when trying to get coverage in an accident under an insurance policy for a vehicle was not in the accident that caused the injuries.

Plaintiff was in an awful motorcycle accident in Calvert County. The Defendant cut in front of the Plaintiff who suffered a myriad of injuries, as is typically the case with motorcycle collisions, including a fractured femur and an open head injury. He incurred over $200,000 in medical bills and suffered permanent injuries. Everyone agrees, an awful case.

The Defendant had a $100,000 liability policy with Erie Insurance. Plaintiff’s Harley Davidson had a $50,000 policy; not a big policy but actually larger than I expect from Progressive Insurance which seems to write a lot of minimum limits policies, particularly for motorcycles. Plaintiff lived with his dad, who had a single limit uninsured/underinsured policy of $300,000.00.

Everyone agreed that the Plaintiff was an insured under the GEICO policy. The question is whether the GEICO policy applied. Plaintiffs’ lawyers, Michael J. Winkelman from McCarthy & Winkelman, played it smart and filed a declaratory judgment action in Annapolis for the GEICO policy, which GEICO would gladly offer if there was coverage. And things started off well. Hon. Paul Garvey Goetzke granted summary judgment for Plaintiff. 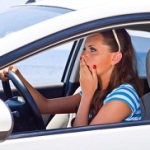 Apparently, the Maryland Court of Appeals snatched this case from the CSA, which it seems to do when it sees an issue it wants to clear up on the record. The issue in the case, ultimately, is whether this exclusion applies:

My opinion? The plaintiff would win in a perfect world. His dad bought coverage. He was insured. They should not permit GEICO to provide winnow down the broad coverage provided under the Plaintiff’s father’s policy. Coverage would apply if he was driving his friend’s motorcycle which really makes no sense. But I can’t disagree that the law is what it is.