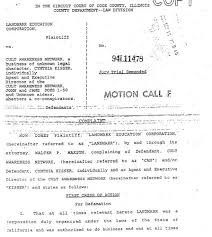 Besides Kearney v. Berger, there was another interesting opinion that came down from Maryland’s appellate courts yesterday. The Maryland Court of Special Appeals ruled on an interesting discovery issue in a landlord-tenant case that has implications for Maryland personal injury lawyers.

The underlying case is a dispute between Checkers – I’m assuming it is the fast-food chain Checkers we are talking about – and its landlord. Checkers claimed it exercised an option to extend its lease. The case involved an estoppel certificate and a bunch of other things that I did not fully understand. Checkers sought documents from Gallagher Evelius & Jones (GEJ), a Baltimore law firm that represented the landlord. GEJ claimed a bunch of exceptions to the attorney-client privilege that were quite interesting. But the trial court never got to the merits of the argument because GEJ did not present its opposition to the motion to compel in the proper “set-up format.”
At first, I did a double-take when I saw the proper “set-up format.” There is a proper set-up format? But without knowing it, I think everyone here files their motions to compel in what the trial court saw as the proper setup format: setting up the controversy in the pleadings with the request, the response to the request, and the argument so the court is not required to flip back and forth between documents. I never thought it was a requirement and I’m still not sure that it is. But it seems like an excellent idea to avoid further annoying the trial court – usually rightfully so – that you have already annoyed with a discovery dispute.

Ultimately, the question in the case is whether a reasonable judge could require the law firm to produce what it believes to be privileged documents without addressing the merits of whether the documents should be produced because the law firm did not present their argument in a way that the court found acceptable. The question is not whether it would be an excellent idea for the court to go back to the law firm and say, “Look, attorney-client privilege is a big deal. Present this argument to me properly and I’ll rule on it.” Instead, the question is whether a reasonable judge can say, “You did not present it to me in the manner in which I believe the Maryland Rules deems appropriate, and I’m ruling against you.” The Maryland Court of Special Appeals, underscoring the great deference Maryland appellate courts give to our trial judges, found that the court could impose the requirement claiming documents should be produced.

The court also, citing Ashcraft & Gerel v. Shaw, underscored a rule that all Maryland trial lawyers should keep in mind in discovery: the burden of substantiating documents that are not discoverable is on the party to whom the discovery requests are directed.