Everyone has their soapbox issues where they maintain the rest of the world is crazy and sanity would be restored if everyone would just listen to us. I have mine; you have yours. Usually, at least for me, few others are paying attention and the world continues to be the world.

One of these issues for me is ad damnum clauses. Here is what happens time and time again: (1) a personal injury lawyer in Maryland file lawsuits and meaninglessly ask for a zillion dollars,(2) the Baltimore Sun and the Maryland Daily Record dutifully report the amount sought as though it actually matters, (3) the people of Maryland roll their eyes about a civil justice system that has run amok, (4) these people become jurors one day and walk in with said eyes still rolled.

The problem is two-fold. First, attorneys sometimes file for ridiculous amounts to draw attention to ourselves. Yes, that is a self-inflicted wound, but it does not lessen the pain for the rest of us.

But the other problem is that we have a duty to our client not to, you know, commit legal malpractice. I have long maintained that it is malpractice not to ask in the ad damnum clause for more than your client could conceivably recover because if you score with the jury more than you expected and you go over the ad damnum clause; you have two problems. First, the judge might refuse your motion to amend the complaint to comport with the verdict. But the even bigger problem is that you have loaded the gun for the plaintiff’s remitter motion. “They didn’t even ask for this much,” they will surely whine in the motion. 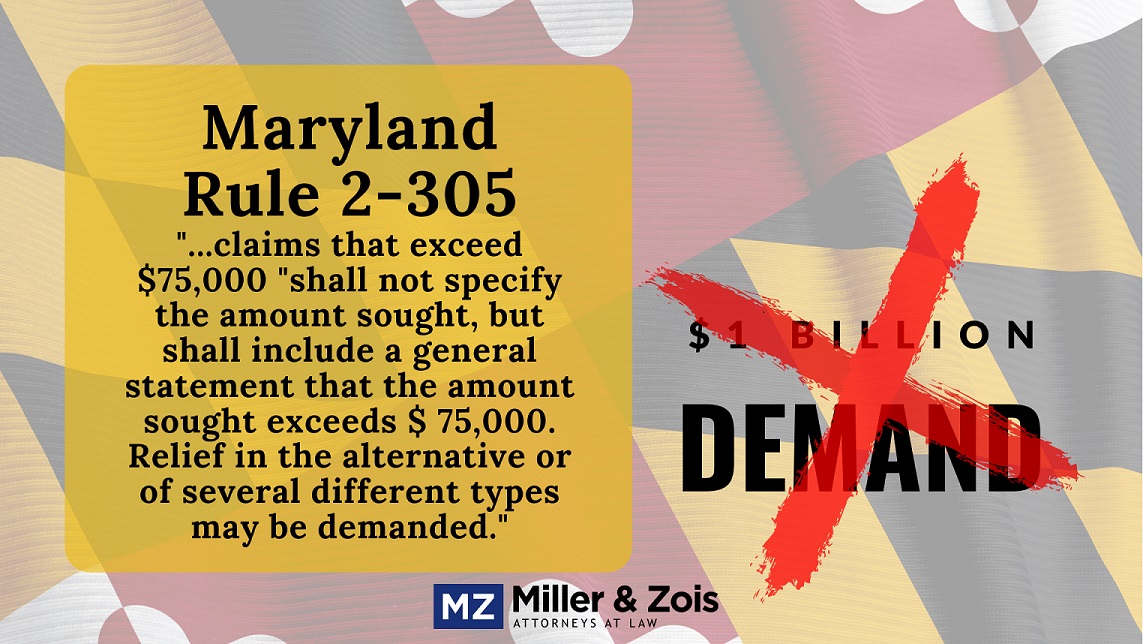 I’ve buried the lead to this story. Sorry. The good news is that under new Maryland Rule 2-305 that will be effective in January, plaintiffs’ lawyers are no longer even allowed – as I read the rule – to state a specific amount if the damages sought exceeded $75,000. Instead, the complaint should include the general statement that the amount the plaintiff seeks is more than $75,000.

Anyway, this is a small but important step in giving the public – and future jurors – a more honest look at our civil justice system in Maryland. You can find the new Maryland Rule here (scroll down to page 8).

Do Maryland lawyers still ask for millions of dollars in when suing in 2018, six years after this was passed?   Incredibly, they still do.

A pleading that sets forth a claim for relief, whether an original claim, counterclaim, cross-claim, or third-party claim, shall contain a clear statement of the facts necessary to constitute a cause of action and a demand for judgment for the relief sought. Unless otherwise required by law, (a) a demand for a money judgment that does not exceed $ 75,000 shall include the amount of damages sought, and (b) a demand for a money judgment that exceeds $ 75,000 shall not specify the amount sought, but shall include a general statement that the amount sought exceeds $ 75,000. Relief in the alternative or of several different types may be demanded.