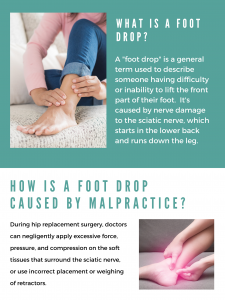 Nearly a quarter of a million Americans undergo total hip replacement surgery.  All of them do so reluctantly.  This invasive orthopedic surgery is a major operation.  Everyone agrees that there are unavoidable risks involved in the procedure.  These risks include a foot drop (also called peroneal nerve palsy or drop foot), sciatic nerve injuries, and, many believe, RSD even when the surgery is performed properly. There is no doubt that the fact that it is a known complication of hip replacement surgery does not make for a straightforward malpractice case no matter how egregious the facts are.  I’m telling you that the surgeon could do the operation with a machete while wearing a Groucho Marx mask and any Maryland insurance company would still mount a defense.  But that does not answer the question posed, which is whether it can be medical malpractice when a patient has a foot drop after a total hip replacement. Let’s start with the consent form.  It is not game, set, match that it is a known risk and that the patient signed a consent form.  We have kept consent forms out of evidence at trial because that is not the real question.  It is a known risk that walking through some neighborhoods in East Baltimore after dark is dangerous.  But it is still a crime when I get mugged, right?  The same goes here.

There is no question that a doctor can depart from the standard of care and improperly performed a total hip replacement.  How?  Lots of ways.  The unnecessary application of excessive force, pressure, and compression upon the soft tissues surrounding the sciatic nerve, or improperly placed or weighted retractors during surgery are all explanations of how a foot drop would occur. In many of these cases, the doctor just says, “I have no clue what happened” to the patient. But if there are no complicating factors at least some doctors will tell you that the only major risks to the sciatic nerve are excessive force and pressure and compression upon the soft tissue surrounding the nerve during the retraction required in the procedure or the incorrect placement or weighing of retractors.  It does not require wild malpractice to do this.  Everyone agrees that even a partial instrumentation injury to the sciatic nerve will cause a foot drop.  So a minor mistake could cause a patient a lifelong injury. So I don’t think there is any question that most times, injury to the sciatic nerve that causes a peroneal nerve injury results from a medical mistake by the surgeon in applying excessive traction or pressure while trying to get to a joint during the procedure.  Really, I think in the abstract, any defense expert would agree with this premise.  The question is, what happened in the particular case at issue.

Plaintiff’s Best Argument in These Cases

The best nerve injury case would be to the sciatic nerve as opposed to the peroneal nerve.  In these total hip arthroplasty cases, the plaintiff’s lawyer may argue that the sciatic nerve must be carefully identified and protected both by visualizing the nerve directly and by careful placement of retractors.  Only gentle pressure should be applied when retracting the nerve.  Doctors have to be mindful of stretching or cutting the nerve. It is also critical to verify the nerve is safe from the effects of the heat of the cement.  Surgeons must also find out that the current from the electrocautery is not transmitted to the nerve resulting in a heat injury to the nerve.  If a doctor does not do these things, a malpractice case may be viable.  The key is to attack the specific technique the doctor used that is a breach of the standard of care.

Under What Other Conditions Would a Drop Foot Lawsuit Be Viable?

Normally, these cases are not malpractice.  But there are a few scenarios where there could be a viable claim:

Our law firm has never handled one of these cases and probably never will.  I buried the lede, right?

Why? I just wrote that negligence causes these injuries.  The malpractice world is cruel.  Almost every malpractice case we have is a challenge.  There is almost always a defense.  We have four solid cases in suit right now where liability is not seriously contested.  Every other case we have is vigorously contested.  Malpractice claims do not start at midfield.  The doctor goes in with the presumption of having provided appropriate care.  So we have to have a better chance than pick-em to go to trial.  The deck has to be stacked in my client’s favor to have a viable claim.  We know that surgical mishaps are a major cause of foot drop injuries during hip replacement surgery.  I’m convinced of that.  Proving that fact in a specific case is an entirely different issue.  Too many of these cases end in a loss at trial. You could fill the largest stadium in the United States with cases that come from medical malpractice in this country each year where the victim was killed.  Yet only a fraction of those people brings a successful claim. There are many, many more injury claims where negligence causes the injury, but no claim is ever brought.  There are some cases I’m sure where the negligence is so over-the-top that our firm would take the case.  But the vast majority of these cases where the malpractice occurred are of the “this is more probable than not malpractice, but I am not 90% certain” variety.  That is not enough to bring a claim, regrettably.

A 79-year-old woman underwent a hip replacement revision. Following the procedure, she developed a large abdominal formation and hypotension. Lab work revealed retroperitoneal bleeding. The woman also suffered a left femoral injury. She developed a foot drop, compartment syndrome, nerve damage, left leg tissue necrosis, and gait problems. The woman alleged that the physician delayed her diagnosis and treatments by not timely consulting a vascular surgeon. The physician and health center denied liability. They argued that they provided appropriate care. A jury awarded a defense verdict.

A woman underwent a total hip replacement. During the procedure, the woman suffered a sciatic nerve injury. She developed a left foot drop. The woman alleged that the orthopedic surgeon’s negligence caused her permanent injuries. She claimed he departed from acceptable hip replacement practices. The orthopedic surgeon denied negligence. A jury issued a defense verdict.

A woman underwent a total hip arthroplasty. She sustained peroneal nerve damage. The woman developed a foot drop and peroneal nerve palsy. She alleged that the orthopedic surgeon’s negligent performance of the procedure caused her permanent injuries. The woman claimed he failed to protect the sciatic and peroneal nerves and improperly positioned her for the procedure. The orthopedic surgeon denied negligence. He argued that the woman suffered a known procedure complication. The jury awarded a defense verdict.

A 61-year-old woman underwent a total knee replacement. Following the procedure, she sustained a peroneal nerve injury. The woman developed a right foot drop. She alleged that the nursing staff’s negligent post-surgical care caused these permanent injuries. The woman claimed they failed to timely perform a neurovascular examination, recognize peroneal nerve injury signs and symptoms, and failed to timely inform the surgeon of these injuries. The defense denied negligence. A jury awarded the woman a $3,000,000 verdict.