A neonatal stroke (also called a perinatal stroke) is defined as an interruption of blood flow to an infant’s brain that occurs between 20 weeks gestation and first 28 days after the child is born. Neonatal strokes can be ischemic or hemorrhagic. Ischemic neonatal strokes are caused by some form of blockage in the blood vessels. Hemorrhagic strokes occur when blood vessels rupture and bleed.

What causes a newborn to have a stroke?

Neonatal strokes result from some event within the body that suddenly disrupts the normal flow of blood to the baby’s brain. In adults, the underlying causes leading to a stroke are usually high blood pressure, diabetes, or some other condition.

Ischemic neonatal strokes are the most common type and they are often caused by some of the following conditions:

Hemorrhagic strokes in newborns are less common, and they are often linked with the following causes:

The middle cerebral artery is by far the most common site of strokes in babies.

Can a baby have a stroke in the womb? 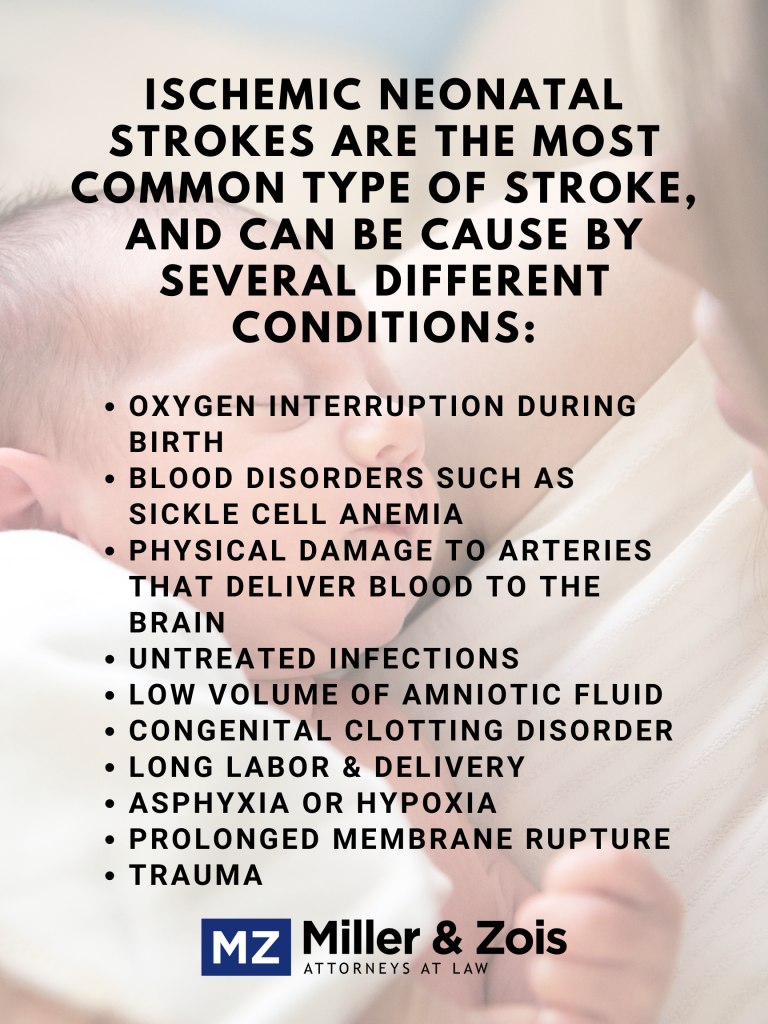 What is the difference between a perinatal and neonatal stroke?

What are the symptoms of a neonatal stroke?

The occurrence of a neonatal stroke frequently goes unnoticed for months or longer because the signs and physical symptoms can be difficult to detect. The symptoms of a stroke are hard to identify in newborns. Seizures are the most common and most visible symptom of a neonatal stroke.

Defense lawyers typically argue that the stroke happened before the labor and delivery, which makes the obstetrician less likely to be responsible for the harm done to the child.

If your baby suffered a neonatal stroke, it may have resulted from poor medical care. The birth injury lawyers at Miller & Zois can investigate your case and tell you whether you might be entitled to financial compensation. Call now at 800-553-8082 or get a free online consultation.