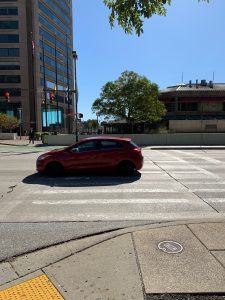 The case involves a car-pedestrian collision. Two brothers were crossing the street in front of their elementary school and one was seriously injured. Allstate settled this claim for the per-person policy limit of $50,000.

The injured victim’s mother and brother retained a car accident injury lawyer and sued, claiming emotional and physical injuries, contending that they were “injured” because of the brother seeing the accident and the mother by the trauma she suffered arriving on the scene after the accident.

In response to the lawsuit, the negligent driver sought both coverage from liability and counsel to defend the claim. Allstate filed a declaratory judgment action, arguing that it was not required to provide a lawyer for its insured because its coverage did not extend to claims of emotional or psychological injuries and any resulting physical manifestations of those injuries. (You are in good hands with Allstate as long as you pay your premiums and never make a claim.) The trial court granted Allstate’s motion for summary judgment relying on Jacobsen v. Farmers Union Mutual Insurance, a 2004 opinion from the Montana Supreme Court.

The Montana Supreme Court reversed, relying on the following policy language: “Allstate will pay damages which an insured person is legally obligated to pay because of bodily injury sustained by any person …” The Montana high court noted that the policy did not state that “damages must result from ‘bodily injury’ sustained by the ‘insured.'” The Montana Supreme Court specifically overruled the court’s prior holding just four years before in Jacobsen v. Farmers Union Mutual Insurance.

I’m a fan of stare decisis but I’m a bigger fan of the Montana Supreme Court’s unanimous willingness to change quickly what it perceived was a mistake. I also think they made the right call because the law is well-settled that you can recover for physical manifestations of emotional trauma in these types of cases. That said, if I were on a jury, would I be skeptical of these kinds of injuries? Yes, I would. The Plaintiff’s lawyer has an uphill climb in this case. Unless the clients are compelling, I think this case will have little chance of success.