October 9, 2020 Update:  As predicted here 10 months ago,  metformin has been recalled.

The FDA and Health Canada are testing metformin for cancer-causing N-nitrosodimethylamine (NDMA).  If this testing shows NDMA levels far above the FDA’s acceptable daily intake limit of 96 nanograms,  Metformin lawsuits could quickly become a large mass tort claim.  The number of lawsuits if this drug is causing cancer would be astronomical.

We are a long way from that.  The context with metformin, and why everyone should measure twice and cut once when looking at this issue, is this is a medically necessary drug for many patients? No one is suggesting that patients stop taking metformin to control their diabetes (although I think patients should talk about their NDMA concerns with their doctors).

This is a 2020 speculation email directed at lawyers about litigation that might be on the horizon.

Metformin was introduced in the United States in 1994.  There were both concerns about its safety and great hope for what we could accomplish with Metformin.  It has become the front-line therapy for Type 2 diabetes patients.  In recent years, the perceived ceiling for Metformin has risen.  Some researchers have believed Metformin may reduce the risk of cancer and even stall or reverse the aging process.

NDMA is short for N-Nitrosodimethylamine.  This chemical is a byproduct of many manufacturing processes.  But NDMA is also normally formed in the saliva of humans with concentrations varying from 4,000 to 10,000 ng/L, depending on the pH and type of food you are eating.  You will also find NDMA in hopefully low quantities in some meats, fish, and beer.

This carcinogenic impurity can corrupt our DNA.  Our bodies do not process NDMA well.  It is a “forever chemical” that continues to accumulate in our bodies.

The is a widespread belief that NDMA can cause cancer, most notably kidney, colorectal, and stomach cancer.

NDMA was found in 2018-2019 in a blood pressure drug (Valsartan) and in Zantac, a wildly popular heartburn medication.  Ultimately, the FDA has to ask the manufacturers to recall ranitidine and nizatidine (another peptic ulcer drug) because of the cancer fears associated with too much NDMA in these drugs.

After these two NDMA scares, it is impossible to rule out the possibility that NDMA in other synthetic drugs.

How is NDMA Getting in These Drugs?

NDMA, ranitidine, and nizatidine share a similar chemical molecular structure.  So with those drugs, the NDMA problem might be an inherent risk with those compounds.  But valsartan and metformin are chemically nothing like NDMA.  So how could they potentially have an NDMA problem?  The speculation is that NDMA is formed during the manufacturing process.

The FDA Is Testing Metformin

The agency is in the beginning stages of testing metformin;  however, the agency has not confirmed if NDMA in metformin is above the acceptable daily intake (ADI) limit of 96 nanograms in the U.S. These investigations take time. The FDA will communicate further information when we understand more of the situation and of what, if any, actions health care professionals and patients should take.

So the FDA is taking a cautious approach, which I think is the right approach.

(And, yes, I see the typo on this infographic!) 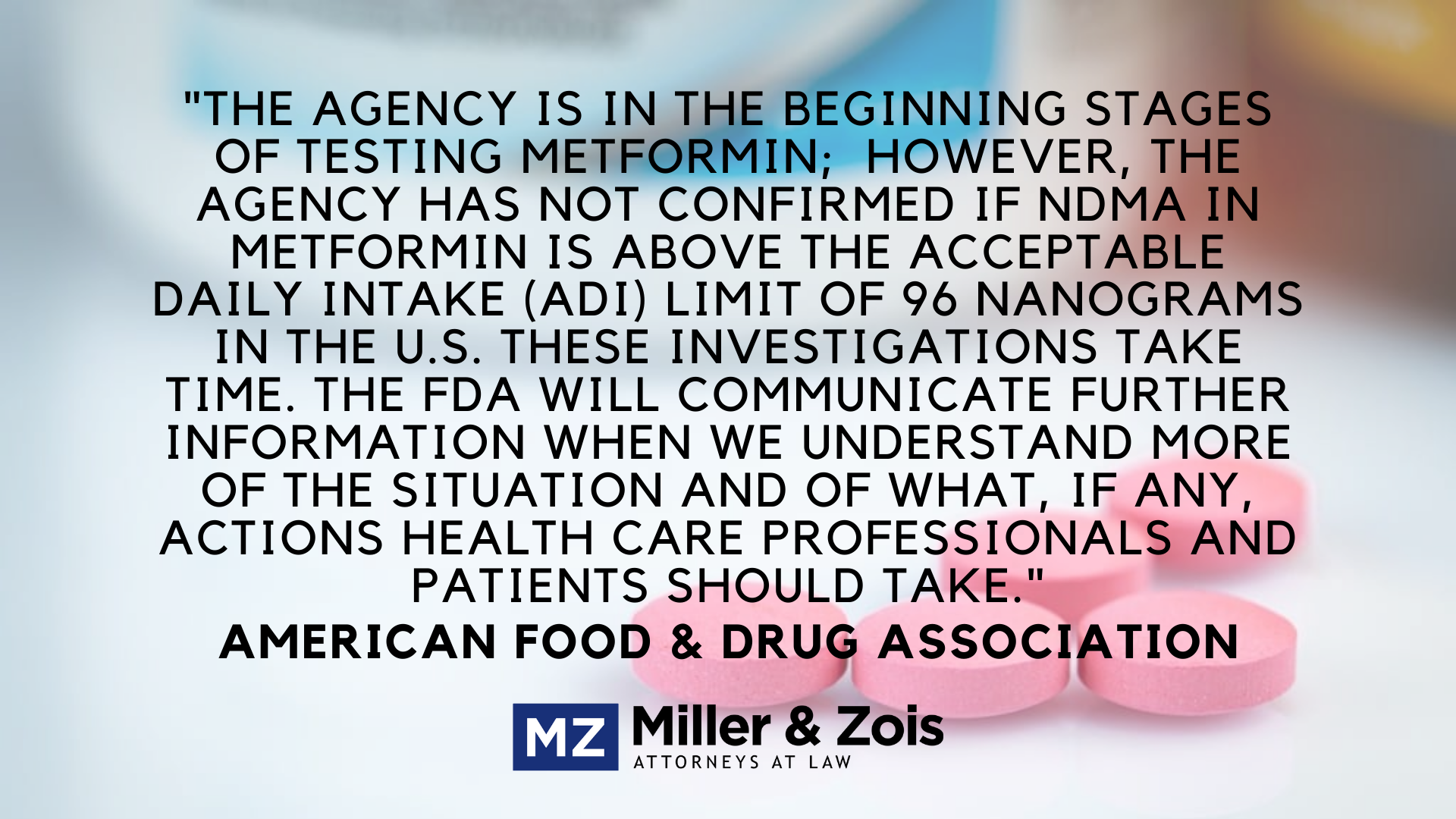 Are Metformin Lawsuits on the Horizon?

If the FDA does not find unacceptable amounts of NDMA in metformin, that is likely to be the end of the issue.  I’ve pledged to be an optimist in 2020. (Update:  COVID killed that.)  So I think this is how it will turn out.  Hopefully, the FDA is being extra cautious. Truth be told, it dropped the ball on NMDA last year.  But if the levels of NMDA approach what they found in Valsartan or Zantac, my prediction is you will see thousands of lawsuits.