I rarely write about legal issues that do not relate to personal injury cases.  But Maryland’s red flag law has gotten so much attention and there is SO MUCH incorrect information out there, I feel like writing a post about it.

Reaction to the seemingly endless stream of mass shootings across the country has generated unprecedented political pressure for gun control laws. Last year, Maryland became one of a handful of states that responded to this pressure by enacting new laws aimed at curbing random gun violence.

Does Maryland Have a Red Flag Law? 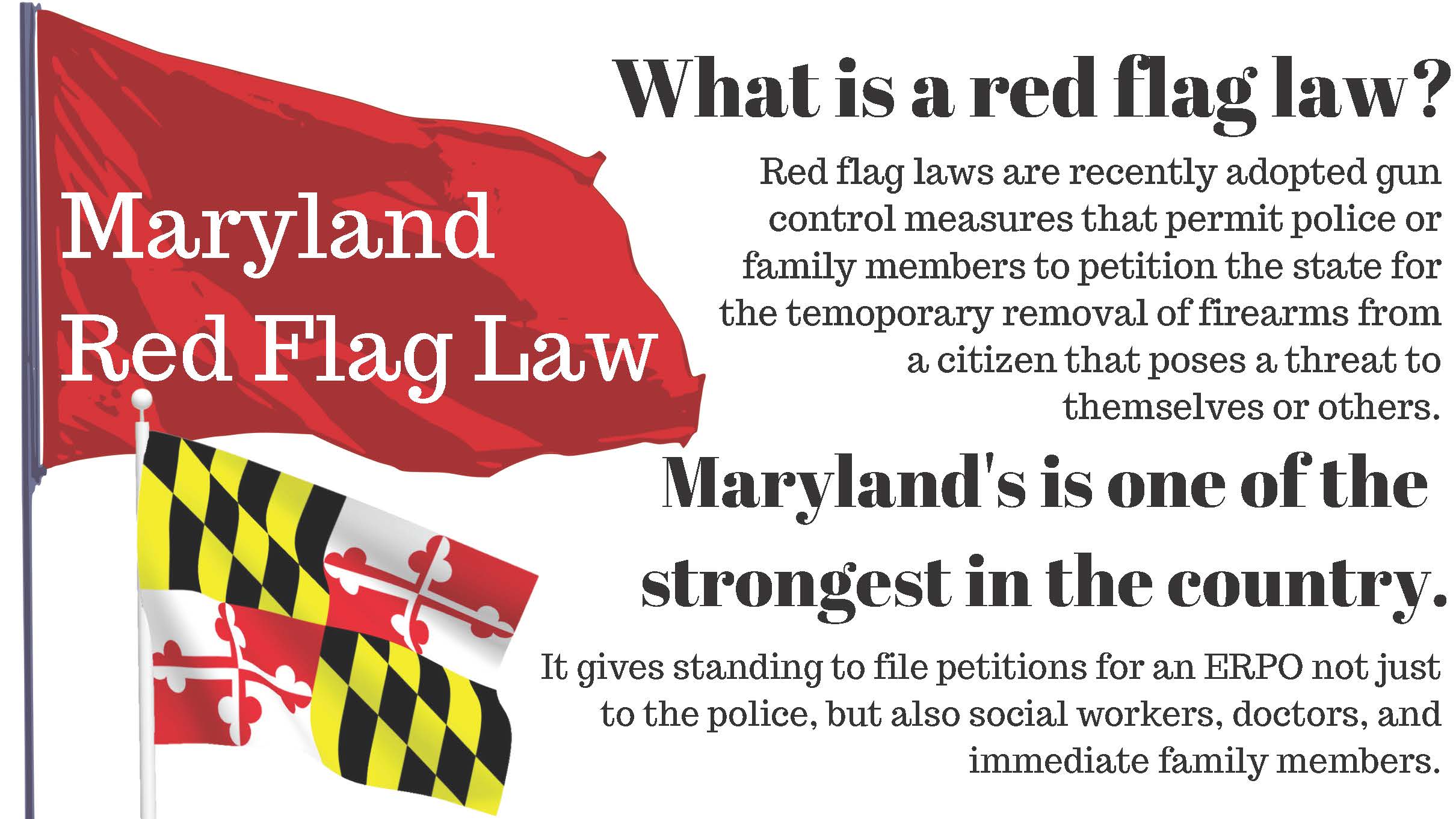 What Are Red Flag Laws?

Red flag laws are new gun control measures that have recently been adopted by many states. The aim of these laws is to get guns and weapons out of the hands of people who are mentally unstable or potentially a threat to others.

Red flag laws basically allow police (or other parties like family members) to file a petition against someone they think may be a public safety threat. If the petition is granted, a judge will issue an extreme risk protective order (ERPO) which temporarily prohibits the person from having guns.

To date, 18 states and the District of Columbia have enacted red flag laws. The red flag laws in every state differ in terms of procedural rules such as who has the standing to file an ERPO petition and what the evidentiary standards may be. For example, in some states, the ERPO petition can only be filed by the police while other states also allow family members or school administrators to file.

Enacted about 1 year ago, Maryland red flag law is codified in Title 5 of the Public Safety Article of the Maryland Code. Md. Code, Pub. Safety §§ 5-601 et seq. Each state has adopted its own unique red flag law and Maryland’s version is one of the strongest in the country.

One of the main reasons the Maryland red flag law is so tough is that it gives standing to file petitions for an ERPO not just to the police, but also social workers, doctors, and immediate family members. This is a much broader scope of potential petitioners than other states. Maryland’s law also creates a system that enables ERPO petitions to be filed, reviewed, and granted on an emergency basis 24 hours a day. If the District Court is closed, an ERPO petition can be filed with and ruled on at any time by District Court Commissioners (the same people who initially set bail in Maryland). See Md. Code, Pub. Safety § 5-602(b).

Once an ERPO petition is filed by a qualified petitioner, the Judge (or District Court Commissioner) reviews the petition and can grant it so long as he or she finds:

reasonable grounds to believe that the respondent poses an immediate and present danger of causing personal injury to the respondent, the petitioner, or another by possessing a firearm

This language creates an inherently vague standard of proof. What constitutes “reasonable grounds” for believing a respondent may be dangerous is highly subjective and results will obviously vary depending on how the judge or commissioner making the ruling interprets the text of the statute.

How Often Do Red Flag Petitions Get Filed in Maryland?

Maryland’s red flag law took effect about 1 year ago on October 1, 2018. Officials report that about 80-100 ERPO petitions are filed each month. This number has been steadily increasing as awareness of the law spreads. Maryland’s red flag law is used much more frequently compared to other states. Maryland’s judiciary receives more ERPO petitions in a month than California does in a year, even though California has 5 times as many people.

Approximately half of Maryland ERPO petitions get filed by the police while the other half are getting filed by family members or members of the respondent’s household (i.e., roommate, girlfriend, etc.). Although the evidentiary standard of “credible threat” is low, ERPO petitions are not automatically granted. In fact, only about 60% of ERPO petitions are granted while the remaining 40% are denied. Petitions filed by law enforcement have a much higher success rate than family member petitions. Most of the ERPO petitions that are granted in Maryland involve a respondent with documented mental health problems, suicide threats, or domestic violence incidents.

Do Other States Have Red Flag Laws?

What States Have Attempted to Pass Red Flag Laws?

Do Any States Have Anti-Red Flag Laws?

Only Oklahoma has anti-red flag legislation. Passed in May 2020, Senate Bill 1081 bars “the state, or any city, county or political subdivision from enacting red flag laws.”

My Take on Red Flag Laws?

What is my opinion on this?  Who cares?  I don’t have expertise in how we approach these complex issues.  I just want to disseminate truthful information and the law and what the law is doing.