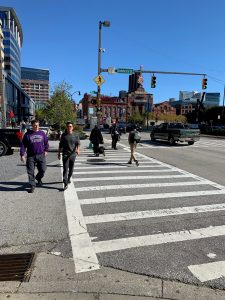 Note: This is an older post that was updated in October 2019

The Maryland Court of Appeals decided Abrishamian v. Barbely, a pedestrian accident appeal from Montgomery County after a jury awarded only half of the client’s special damages (medical bills and lost wages) and gave $0.00 for pain and suffering. The Plaintiff loses this appeal and it is not a close call. The court, however, discusses some interesting law is of interest to the Maryland accident lawyer.

The first issue is no issue at all. The plaintiff’s lawyer asked the judge to recuse himself because the judge’s brother represented the defendant 17 years ago and someone else with the same last name as the Defendant ten years ago. I’d love to know how the Plaintiff’s lawyer learned this and I’d also be curious why he would seek recusal for such an attenuated connection. Had the court gone the other way, it would have really brought havoc to the justice system in Mayberry. Would they have to transfer every case to Mount Pilot?   Anyway, we have a legitimate sample motion to recuse on our website if you are interested.

(Brief intermission: one of the great unsolved mysteries of my childhood was the distance from Mayberry to Mount Pilot. Someone once said a four-hour drive, but Barney Fife said it was 12 miles. Barney was not the most credible person but 12 miles is specific and he had no reason to exaggerate, given the context. I just don’t know. In an unrelated story, I may have watched too much television as a child. Let’s just get back to this case.)

The second issue is far more interesting. Defendant’s doctor was asked on cross whether he had a copy of the Plaintiff’s medical insurance card. Plaintiff’s lawyer objected before an answer could be given, and the judge sustained the objection. Plaintiff’s lawyer argued the trial judge should have granted a mistrial because the question violated collateral source rule. This is a long-shot argument—a mistrial is not out of the question if the question was inappropriate, but it is a Dr. Sam Beckett quantum leap from that to a mistrial as a matter of law. (The court also noted that a question may not be “evidence” subject to the collateral source rule.)
But the Court of Special Appeals did not have to get that far, finding that the question itself was appropriate. The court confirmed the collateral source rule, which has been Maryland law for over 100 years, that collateral sources are “substantively inadmissible, and our courts generally prohibit the slightest reference to insurance in front of a jury because it may prejudice the issue of damages.” Waxing philosophically, the court noted that almost any rule has several exceptions.

Plaintiff’s final argument leads the court to something more interesting. Plaintiff’s lawyer contends that as a matter of law, the jury’s verdict was inadequate given the evidence and the trial judge abused his discretion by denying the motion for a new trial on this issue with giving a fair hearing/written opinion.

This is a dead loser. There is no requirement for a written opinion by a judge under Maryland law. But the court says something here I find very interesting:

We begin by noting that, although a trial court may set aside a verdict on the
ground that it is against the weight of the evidence, we do not know of any case that has been reversed for an inadequate verdict. Snyder v. Cearfoss, 186 Md. 360, 368 (1946); see Butkiewicz v. State, 127 Md. App. 412 (1999) (citing Buck, 328 Md. at 58). This is most likely because the trier of fact may accredit or disregard any evidence introduced [footnote omitted] and a reviewing court may not decide how much weight should have been given to each item of evidence. Edsall v. Huffaker, 159 Md. App. 337, 342 (2004) (citations omitted).

So, in my mind anyway, the court is explaining with approval why motions for additur – a motion that the trial court should add to the damages because the judgment shocks the conscience of the court – fail before trial judges.

But under Goose v. Gander, isn’t a motion for remittitur the same thing? So we defer to the jury when the damages are low, but if a judge finds the jury award excessive—which has happened to Miller & Zois’ lawyers several times—then the judge can just snatch it away?   I wish that court had looked at the issue more honestly and pointed this out, leaving room for future motions for additur.

Instead, it gave another cite for defense lawyers opposing a motion for additur by rationalizing why there has never been a case where a judge added to the award because the court thought the award unjust.

The complete thing is an academic conversation. There should not be additur or a new trial as a matter of law, and this applies to the entire appeal. There was zero chance of success from the minute this appeal was filed. But the issues and law that came up while dismissing Plaintiff’s claims were of interest and every Maryland accident lawyer handling motor vehicle personal injury claims should read this case.