The Maryland Court of Appeals decided another case in the ongoing saga that continues to burn forests that is the Maryland Local Government Tort Claims Act.

First, it is worth noting: the LGTCA is stupid. Really stupid. There is just no reason in 2015 why we put unreasonable burdens on people that are hurt by the local government. Personal injury lawyers blow or miss the LGTCA de facto “state of limitations” to give notice of a claim all the time. Most of those lawyers should know better. But in this case, there is just no reason the Plaintiff (actually, the estate of the decedent in this case) should have to know about complying with the Local Government Tort Claims Act. 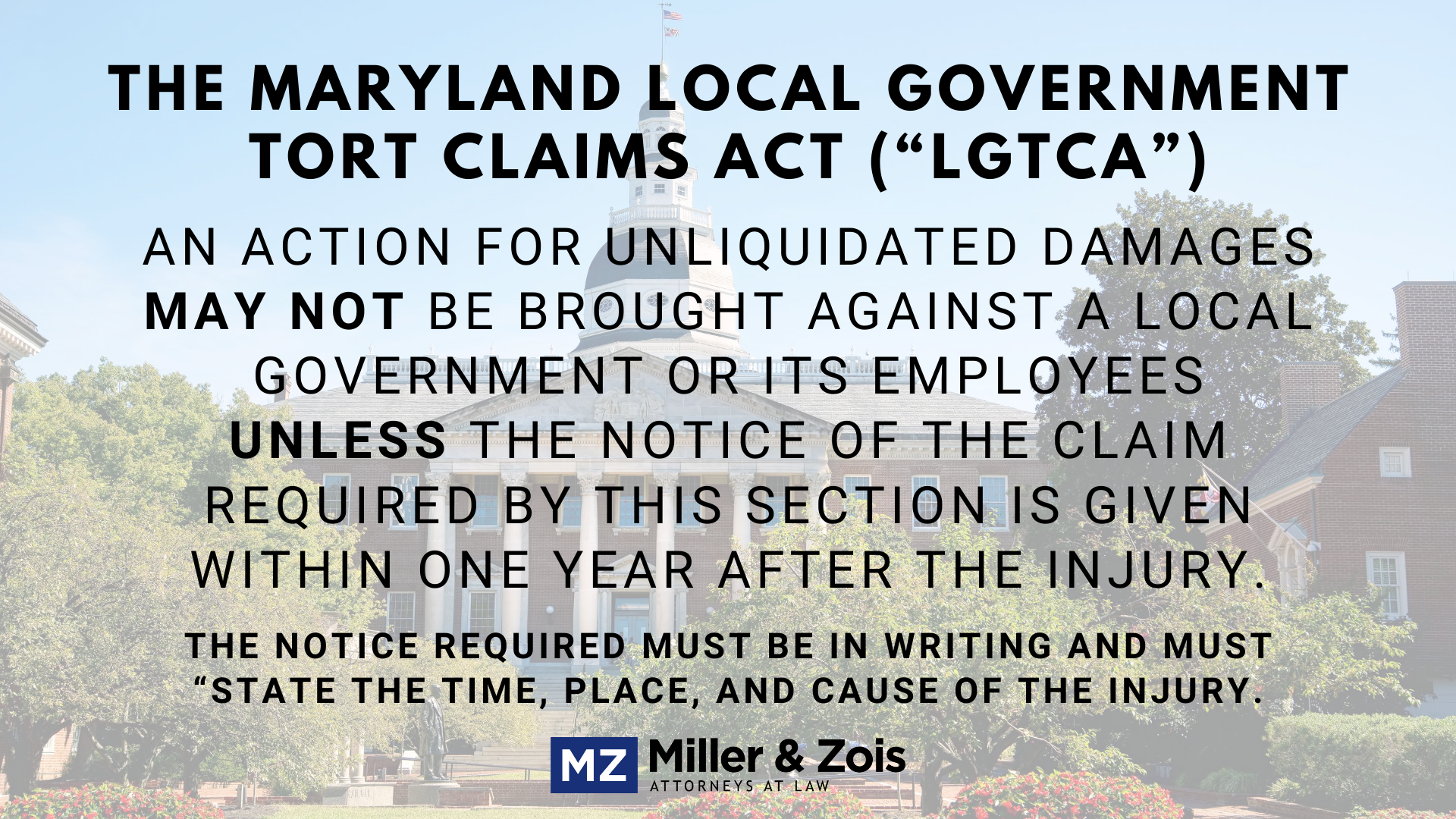 (Brief Post Interruption: Ultimately, if you read the case, you know I’m retrofitting the facts to fit my narrative. There was a lawyer involved in the case early on who – putting it politely – could have set this case up a little better. And plaintiff – who filed a tort claim but was not injured in an accident – didn’t really lose the case for failure to provide sufficient notice under the LGTCA but for failure to allege compliance with the LGTCA in the Complaint. I think this is the wrong call, too. I’ll get to that point, I promise. But the court makes clear they would have hammered him on the notice if it had been alleged in the Complaint. )

Plaintiff (later actually his Estate but I will not refer to it that way) filed suit in Prince George’s Circuit Court alleging that he was fired because of age and disability discrimination. The lawsuit alleged that Plaintiff had exhausted all administrative remedies” but did not allege compliance with the notice provisions of the Local Government Tort Claims Act. The City of Laurel filed a motion to dismiss arguing that the Complaint should be dismissed pursuant to Maryland Rule 2-322 for failure to state a claim upon which relief may be granted because (1) the Complaint did not allege compliance with the notice requirement of the LGTCA, which is a condition precedent to a claim against a local municipality under Maryland law and, therefore, must be alleged in the Complaint, and (2) there was no indication that Plaintiff had in fact complied with the notice requirements of the LGTCA.

Remember, the LGTCA notice requirement is not a statute of limitations, but “a condition precedent to maintaining an action against a local government or its employees to the extent otherwise not entitled to immunity under the LGTCA.”  There are a much of other dumb rules to trip up unsuspecting plaintiffs’ counsel which the government is trying to rely on there. Compliance with the notice requirement of the LGTCA must be set for in the plaintiff’s lawsuit.  If this does not happen, the claim is not a viable.

If you are a plaintiff’s lawyer, what do you do? You amend the Complaint. Easy peasy lemon squeezy, right? For whatever reason, this didn’t happen. And the court hung the Plaintiff with that.

First, I think the trial judge should step up and holler to Plaintiff’s counsel: you need to amend your suit to include a LGTCA compliance sentence. Shouldn’t the judge level the playing field if the lawyer is making an obvious mistake? I don’t think you can watch someone shoot themselves in the foot without saying, “Hey, I think you will shoot yourself with that thing.”

If the trial judge won’t do it, the appellate courts should not let form triumph over substance.  Judge Sally Adkins nails it in the dissent, citing as an authority, herself in a dissent she had probably written 20 minutes before. (That has to be fun.) She writes:

I respectfully dissent from the majority opinion, which throws a plaintiff out of court, permanently, for failure to allege in his complaint that “all conditions precedent have been
performed.” See Md. Rule 2-304(b). It does so without allowing him leave to amend his complaint, even though he made good-faith attempts to comply with the notice requirement and alleges in a responsive pleading that he has complied with the condition precedent at issue. This result, I fear, is another step towards a “gotcha jurisprudence” which makes unreasonable demands of “lawyers in the trenches.” See Smith v. Kent County, 418
Md. 692, 742, 18 A.3d 16, 40 (2011) (Adkins, J., dissenting).

Anyway, enough about this case. Let’s circle back: the Local Government Tort Claims Act is stupid. The world is moving away from people getting an unfair shake for things outside of their control. Equal rights for gays are the latest manifestation of that movement. After all the big ones are knocked out, people will focus on the less obvious things that create a raw deal. And the LGTCA and it’s annoying big brother the Maryland Tort Claims Act will be victims of this focus on fairness. Okay, I see your eyes glazing over, you don’t read this blog for preachy rhetoric. I’ll pipe down.