Serious auto accident cases have been a central focus of our law firm since we opened our doors 18 years ago. We have earned our clients over $50 million in settlements and verdicts in motor vehicle accident cases.  We believe this blog and our website does more than anything else online to educate victims about their rights and let them better understand the opportunities they have for compensation… and how to get it.

What to Do After a Car Accident

Depending on the severity of the accident, the first thing that you should do is seek medical treatment for anyone who needs it. Granted, if it is a fender bender, EMS might not be necessary. At an accident scene, be vigilant of all the details. Make sure you know who your witnesses are, the amount and severity of the damage to the involved vehicles. Also, know the circumstances including the conditions, the precise location, and even the positions of the vehicles. This can only help you in the long run. Remember what they told you in kindergarten: silence is golden. Try to say as little as possible at the accident scene.  You do not need to prove your case to the police officers or anyone else at the scene of the accident. Do not estimate speeds, predict who was at fault, or speculate about the accident and the evidence.  Instead, seek medical treatment if you need it, then contact a lawyer when your claim is fresh in your mind and accident reconstruction evidence can be accumulated if necessary.

The vast majority of car accident cases settle. Most car accident cases are filed against the insurance company of the negligent driver. These companies handle a lot of claims.  They do not have the resources to try even 10% of the accident claims that are brought against them. So the companies and their lawyers are looking to get these cases resolved.  Granted, plaintiffs and plaintiff’s lawyers are interested in settling them as well because it places some certainty in an uncertain system and because, all things being equal, people want their money sooner rather than later. But you have to be able to use this fact to your advantage to get more money from the insurance company. If you do not have an attorney, your back is already up against the wall in negotiations, meaning you need to hire an attorney to increase your chances of coming to a fair settlement.  Is this true in every single case.  No.  There are smaller cases where you probably do not need a lawyer to get something resembling a reasonable settlement.  Would you get as much as our law firm would get for you? It is extremely unlikely.  But if your injuries are minor, what we can do for you is far less than what we could in a serious injury or death case.  We have gotten victims more than 50 times the settlement offer they got from the insurance company before the hired us.  But that is only going to happen in serious injury cases and death cases.  Our firm cannot — no firm can — get you 50 times what you would otherwise get for yourself in a garden variety soft tissue injury case. What is the take home message in all of this?  First, you are always safer getting a lawyer then handling a case yourself.  Always.  But some people hate the idea of anyone taking a portion of their money.  If you are of this mindset and don’t mind the work, hassle and risk, you can handle it yourself if you case is small. I’m talking about less than 6 weeks of treatment and at the end you are 100% sure you are just like new.  If you think you might have a permanent injury, I think it is absolutely insane to try to handle your cases on your own.  This would be true even if you were a lawyer yourself. This is a self serving point that also happens to be true: you want to hire an attorney who has a solid reputation and a history of large verdicts and settlements  because insurance companies offer higher settlements to those types of clients who have counsel that will give them a run for their money…literally.

Venue is a big deal for personal injury lawyers, especially in car accident cases. By venue, I mean the jurisdiction that will actually hear the case. The problem is, not all venues are created equal (for personal injury attorneys at least). Depending on the composition of the potential jury pool, some jurisdictions tend to award higher verdicts than others. Insurance companies know this and tend to to make settlement offers that correlate with the potential amount that a jury may award. Take Maryland for example: juries in Baltimore City or Prince George’s County are much more likely to award a higher settlement than those in a a more rural area.  Can we win in places like the Eastern Shore or the western part of Maryland? Absolutely.  But we are taking about settlement values of cases.  There is no denying that where the claim is brought is a big part how a claim is valued.

There are a couple different things to keep in mind when dealing with insurance companies and insurance policies in general. First, car insurance in most states is mandatory. States set mandatory minimum amounts of coverage that drivers must maintain. Policies in some states also give the option of having personal injury protection (PIP). PIP is insurance that covers medical bills, lost wages and other incidental expenses that come along with being involved in an auto accident. This coverage kicks in a lot sooner than recovery from a lawsuit, so PIP is a great way to protect against  medical bills or lost wages that could result from an accident. Maryland also require uninsured or under-insured motorist coverage (UIM). Unfortunately, not every driver is insured, and when one of those drivers causes an accident, it is unfair to leave the innocent driver high and dry. UIM is a way for you to make a claim against your own insurance company to cover the costs associated with an accident from an uninsured driver. The same goes for under-insured coverage, except in this scenario the negligent driver has insurance coverage, just not enough to cover the extent of their negligence.

Taking Your Case to Court

Even though most cases settle, there is always a chance your case will have to go to trial. Winning a car accident case means proving four different things:

These are the elements of negligence, which is what nearly every car accident claim is based upon. Sometimes car accidents can result in wrongful death lawsuits, but even in those instances the underlying cause of action is still negligence.

Given the unique set of factors involved in each car accident, all manner of injuries can be sustained. Soft tissue damage is a general term which describes injuries to the muscles, tendons, and ligaments of the body. Soft tissue damage is found in nearly every car accident, and is actionable by itself. Car accidents can also produce broken ankles and legs as a result of the lower extremities hitting the pedals with excessive force. Of course, broken glass produces cuts that can result in permanent scarring and disfigurement. Unfortunately, the possibility of fatal injury is always there when it comes to car accidents as well. Every car accident is different, meaning every injury sustained in a car accident is different as well.

Below are sample settlements and verdicts in car accident case in Maryland.  These are mostly Miller & Zois cases but we threw in a few extra to give you a larger feel. Let’s talk for a second about what these example settlements and verdict will not do for you.  These are not an exact predictor of how a jury will award even if you case seemingly identical. This is particularly so of verdicts.  Five different juries may give five very different awards. Settlements are a little better predictor because they have settlements tend so soften some out some of the highs and the lows.  But in comparing cases, you are still left with another problem.  Two cases that seem alike are rarely alike.  Every personal injury case is unbelievably fact intensive.  You do not know what factors really drove the insurance company and the plaintiff to settle.  Sometimes, it is a factor one side is not even aware of that pushed the case towards an out-of-court resolution.  So the take home message is to use example settlements and verdicts as a tool along with other tools that 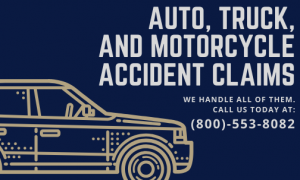 Call us today for a free consultation on your car accident claim.