The New York Times reported on Saturday that Genentech posted a letter on its website warning eye specialists of its new eye drug Lucentis, which may increase the risk of stroke for those on Lucentis. Genentech found that patients taking their marketed dose of Lucentis were much more likely to suffer a stroke than patients taking a lower dose.

Lucentis is a recombinant humanized monoclonal antibody.   What it does is that binds to and inactivates vascular endothelial growth factor (VEGF-A) which is considered the dominant inducer to the growth of blood vessels.  Lucentis is a fragment derived from the same antibody.

The drug quells the development of excessive and abnormal blood vessels in the eyes, which is a particular concern of diabetics. Nearly 8 million people in the United States have been diagnosed with diabetic retinopathy, a frequent complication of diabetes.  The aim of this medication is to reduce the amount of retinal edema. So the FDA approves the therapy for age-related macular degeneration (AMD).  It works.  Lucentis has prevented decreased vision and blindness in thousands of patients.

Not Every Doctor Is Concerned 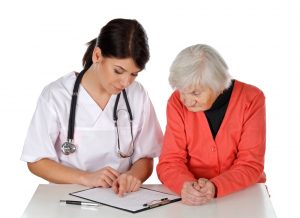 Some doctors remain undeterred. “Right now, it will have no impact on my use of Lucentis,” a doctor at the Palmer Eye Institute of the University of Miami, wrote to the New York Times in an e-mail message. “When given a choice between a high likelihood of blindness or a 1 percent risk of stroke, I think most patients will choose their vision.”

I don’t know enough about Lucentis to say whether I think this doctor is correct. The problem is, I don’t think Lucentis’ manufacturer knows either.  But I get what the doctor is saying.  He thinks the risk is worth the benefit.  This may very well be true with some patients, even if there is a stroke risk with Lucentis.

You would think we would have the answer to this question over 10 years later, right?  We don’t.  The studies are still conflicting on whether Lucentis can cause a stroke.  But this new 2021 study suggests that there might be an increased risk of hemorrhagic stroke.