What is the settlement value of a personal injury claim where you have lost your vision in either one eye or both?

Metro Verdicts Monthly has a graph that reflects the median verdicts and settlements when the injury victim loses vision in one eye in Washington, D.C., Maryland, and Virginia. [

sc_fs_faq html=”true” headline=”h2″ img=”” question=”What Is the Average Settlement Compensation for Loss of Sight in One Eye?” img_alt=”” css_class=””] The median for compensation for losing vision in one eye in Maryland is $231,000. You could drive a truck through the gap between Washington, D.C., and Virginia’s median settlements and verdicts with loss of vision in one eye cases: Washington, D.C.’s median is $162,500; Virginia’s is $320,000. [/sc_fs_faq] These numbers are a bit misleading.   I think because most loss of vision cases are product liability cases. Many product liability cases have questionable liability which decreases the average and median eye injury settlement amounts. If liability is not an issue, the compensation ayouts in loss of sight in one eye cases are much higher. 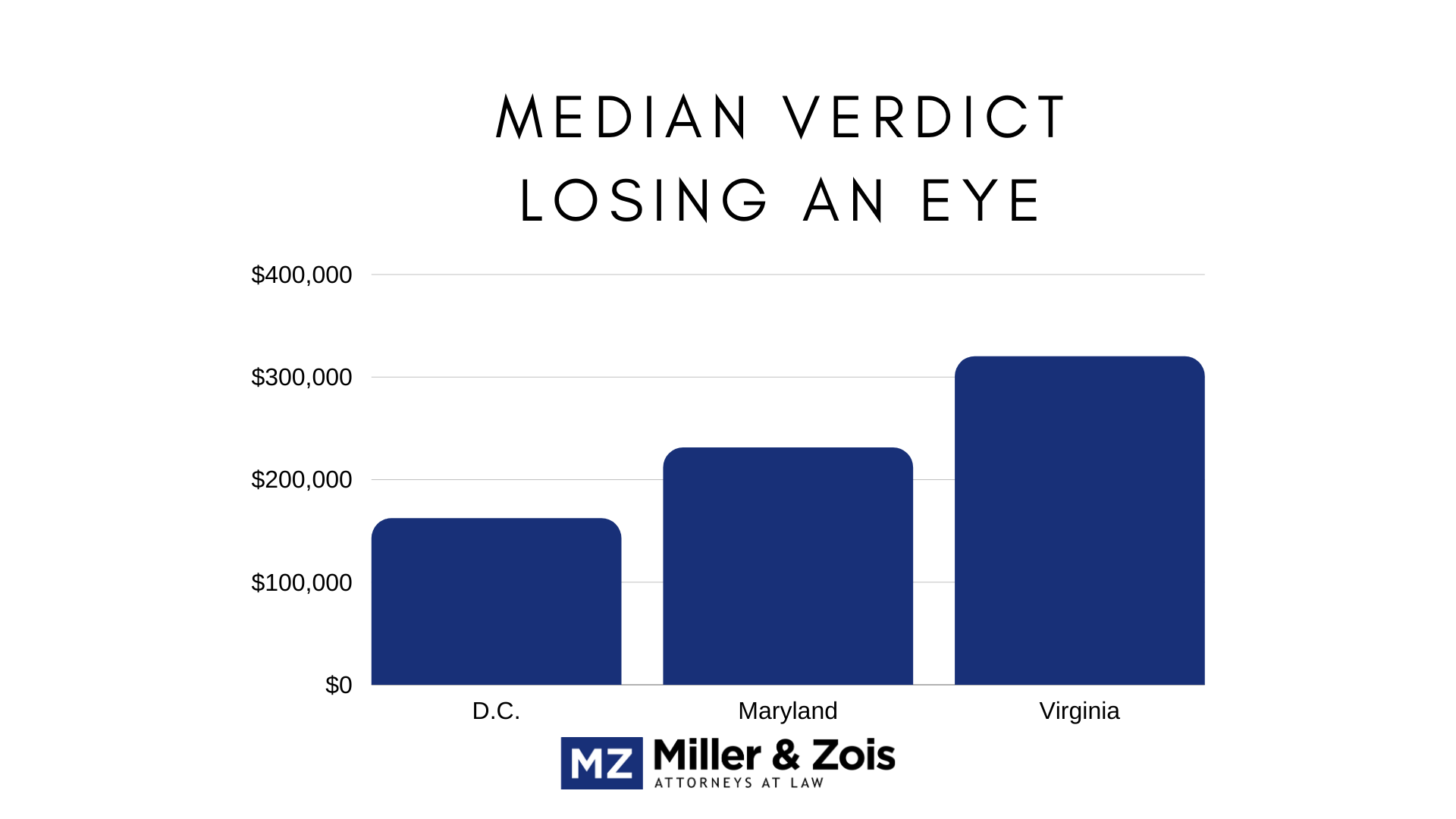 What Kind of Money Can I Expect for an Eye Injury at Work?

But in some cases, the victim has two claims: a workers’ comp claim and a claim against the party that caused the harm.

What Types of Eye Injuries Do You See in Your Law Practice?

Our law firm has handled product liability, medical malpractice, and workplace injuries was damage to the eye that caused a partial or complete vision disturbance.

Is It Contributory Negligence Not to Wear Eye Protection?

Lawyers debate this issue. Our attorneys believe it is not contributory negligence under Maryland to not wear eye protection even if it is found that such protection would limit your injuries. (But, boy, wearing eye protection a good idea. The American Academy of Ophthalmology tells us the 90% of the 2,000 U.S. workers suffer EVERY DAY, 90 percent of these accidents can be avoided by wearing eye protection.)

Is There a Cap on Non-Economic Damages for an Eye Injury in Maryland?

In Maryland, any vision loss should be a “cap” case, which means you would get Maryland’s statutory cap of $875,000 for an accident occurring in July 2020, plus whatever your economic losses might be. If it is a malpractice case, the cap on your pain and suffering payout is $830,000.

Is There a Cap on Economic Damages in an Eye Injury Case?

Damages are broadly defined both as direct costs to the victim and as any loss of income or economically valuable activities that resulted from the incident. The subject’s pecuniary damages are divided into four categories: loss of earnings, medical expenses, household services, and the cost of any care that is required.

My law firm has always been interested in loss of vision cases.  Our interest has increased even more with the Elmiron lawsuits that have begun in earnest in 2020.

What Is the Average Workers Comp Settlement for Eye Injury?

It is important to understand the average payout in eye injury cases data that we have presented applies only in personal injury cases. In a Maryland workers’ compensation claim, the payouts will generally be much lower than they would be in a civil lawsuit.

These are eye injury settlements and verdicts from around the country, mostly loss of vision in one eye settlements.

Can these give you a better idea of the range of compensation payouts loss of vision cases?  Absolutely.  But I think you need to be careful about reading too much into a single case that sounds much like your own. There are just too many factors in eye injury settlements and verdicts in the mix to read a summary paragraph and think your case is factually identical or that all other factors in that case – most notably, jurisdiction, will be at play in yours.

So digest the lessons these cases teach. But don’t “overlearn” the lessons, if you know what I mean.

A 28-year-old passenger was involved in a single-vehicle collision. He suffered a traumatic brain injury, a subdural hematoma, a frontal lobe contusion, facial fractures, jaw fractures, rib fractures, a pneumothorax, an acetabulum fracture, a right foot fracture, bilateral shoulder injuries, and a spleen laceration. The man underwent an open reduction internal fixation procedure and a facial reconstruction. His jaw was wired shut for several months. The man also underwent a colectomy. He was left with memory loss and cognitive impairments. The man was now completely blind in his left eye and partially blind in his right. He underwent in-patient rehabilitative therapy for eight months. The man returned to work. However, he experienced significant pain on the job. The man alleged negligence against his driver. He claimed he operated the vehicle while under the influence of alcohol. The defense disputed liability. They argued that the man knowingly rode with an intoxicated driver. The jury found the man 25 percent liable and the at-fault driver 75 percent liable. They awarded $20,636,313.

An 87-year-old woman was admitted to a nursing home. She developed scalp sores. The nursing home staff used medicated shampoo to treat the condition. The woman’s scalp sores appeared to improve. Eight months into her stay, the shampoo made contact with her right eye. The woman was brought to the hospital. She was diagnosed with subconjunctival hemorrhage and edema of her right eye. The woman developed permanent right eye blindness. The woman died the following year from unrelated causes. Her family alleged negligence against the nursing home. They claimed it failed to provide appropriate care and protect the woman’s eyes. The family received a $2,447,500 award.

A minor passenger was involved in a highway collision. She suffered a moderate traumatic brain injury, impaired vision in one eye, and multiple fractures. The girl developed post-traumatic stress disorder. Her parents allege negligence against the at-fault driver. This case settled for $4,725,000.

A minor passenger was involved in a highway collision. She suffered a moderate traumatic brain injury, impaired vision in one eye, and multiple fractures. The girl developed post-traumatic stress disorder. Her parents allege negligence against the at-fault driver. This case settled for $4,725,000.

An employee of a beverage distribution company suffered an injury to his left eye after glass bottle shards fell out of the box he carried. His doctor assigned him with 85% impairment to his left eye and restricted him from operating heavy equipment and hazardous machinery. He also suffered chronic headaches and depression. The case settled for $100,000, far less, I think, than what the settlement value should have been based on these facts.

A man in his early 50s suffered a detached retina after a rear-end collision. The morning after the collision, he noticed floaters in his right eye. He ignored them, as he previously experienced floaters. Over the next few weeks, his vision deteriorated significantly. He saw an ophthalmologist who diagnosed him with a retinal detachment and tear. The ophthalmologist instructed him to lie, face down, as much as possible. His vision improved to 20/30, however, his vision before the accident was 20/20. He now experiences more difficulty looking at a computer screen.. The jury awarded him $500,000.  This is the opposite of the last case. This would seem to be a great deal of money for going from 20/20 to 20/30.

A woman in her early 50s suffers sphenoid wing meningioma behind the orbital canal. She gets surgery.  A known complication of the repair surgery is a crushing of the optic nerve that causes blindness.  After the surgery, she sees a neurologist for pain management. She sues the neurologist arguing that he failed to do a CT scan despite complaints of headaches and facial pain.  These are signs that there is a concern with her optical nerve. The neurologist argues he is just treating her for pain.  The neurologist also says he told her to see a neurosurgeon. But there is no notation in the file and the woman vehemently denies that he told her to see another doctor.  The defense lawyers clearly believed that the jury would not believe the neurologist. The doctor settles the case for $925,000, $75,000 less than his malpractice policy limit.

A construction worker suffers a severe penetrating injury to his right eye.  As a result, he lost his vision.  The plaintiff claims his injury results from an employee pulling his leg. An employee of defendant Caylor Construction pulled his leg, which caused the man to make an involuntary movement. The plaintiff contended that the employee’s unexpected physical contact caused the injury. The employee denied touching the plaintiff and contended he was negligent in failing to wear eye protection while on the job site. A jury determined the plaintiff was 10% at fault, the plaintiff’s employer was 10% at-fault (workers’ comp), and the defendants were 80% at fault.

Plaintiff, having been diagnosed with glaucoma years earlier, sought treatment and monitoring of his glaucoma from Defendant, as he advertised himself as a glaucoma specialist.  I guess he was just a self-proclaimed expert. After receiving poor treatment for five years, Plaintiff had to undergo a left eye trabeculectomy (filtration surgery).  Plaintiff sued Defendant for negligently failing to monitor properly and care for his glaucoma.  The case settled out of court for $250,000 in economic damages and $4,500,000 in noneconomic damages.

Plaintiff, a 16-year-old girl, was visiting her boyfriend when another person in the home discharged a pellet gun, striking Plaintiff in the face.  Because of the location of the pellet, it could not be removed, causing Plaintiff to experience several weeks of headaches and permanent residual impairment of her vision.  This is awful anyway, but I think these cases are a thousand times worse when we are talking about a 16-year-old with her whole life ahead of her.  The plaintiff’s eye injury lawyer did something you don’t often see.  They filed and won a motion for summary judgment.  This means the defendant is found responsible as a matter of law.  So the case proceeds on damages only.  This tells me it was a slam dunk case.  The plaintiff’s expert opined that because of the location of the pellet, it could not be safely removed and that any type of future trauma sustained could cause a shift in the pellet’s position.  This case reached an out-of-court settlement before the jury rendered a verdict.

Plaintiff, 59 years old, treated with Defendant doctor for diabetic retinopathy for two years. Defendant determined that Plaintiff’s condition had progressed to proliferative diabetic retinopathy.  While Plaintiff conceded that her left eye vision could not have been saved, she argued that Defendant failed to treat her right over for over a year, allowing her vision to go from good to blind.  The plaintiff filed a medical malpractice suit claiming negligence and failure to timely treat her condition.  The defendant denied all allegations and contended that his treatment was safe, appropriate, and conservative.  He further claimed that Plaintiff’s heart condition prevented further treatment.  He asserted that her left eye’s vision was stabilized, but she lost sight in her right eye because of a sudden and unexpected retinal detachment.  A Baltimore County jury, which usually gives doctors the benefit of the doubt, obviously saw it differently.

Our law firm has successfully handled vision loss cases in motor vehicle accidents, medical malpractice, and product liability cases.  Call my office at 800-553-8082 and let’s figure out together whether you have a viable claim for compensation.  You can also get an online consultation here.