This is a 14 year-old post but updated on May 3, 2020 to give the current state of negligent security law in Maryland.

the Maryland Court of Special Appeals decided the case of Veytsman z. New York Palace, Inc. The issue in Veytsman was whether a nightclub had a duty to protect its patrons from being attacked by fellow patrons.

The court found that the nightclub had no such duty, affirming Baltimore City Circuit Judge Evelyn Omega Cannon’s ruling. The opinion underscores how difficult it is to hold nightclubs responsible for altercations that invariably occur in nightclubs, bars, and restaurants.  But I also want to explain how to bring a negligent security case in Maryland. 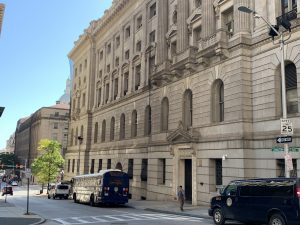 Plaintiffs were having dinner at the New York Palace.  It has since closed but was once a hip hangout for Baltimore’s Russian community, on the same evening as a wedding reception. As is often the case when alcohol is involved, an altercation arose between the Plaintiffs and the wedding party. The plaintiffs alleged in their Complaint that they were physically assaulted.

The question posed to the court is whether the nightclub had a duty to protect Plaintiff from an attack by third parties. The court set forth the three circumstances under which they may hold a landowner liable when someone is injured by a third-party criminal activity:

Here, the court found that Plaintiff had no evidence that New York Palace had advance notice that an altercation might arise, nor did it delay in acting to protect the Plaintiffs from the aggressors once the brawl began.

There is generally no duty in Maryland to protect anyone, including business invitees, against crimes perpetrated by third parties on the property owner’s landowner’s land.

So there is a great deal of Maryland case law that says that if the “landlord knows, or should know, of criminal activity against persons or property in the common areas, he then has a duty to take reasonable measures, in view of the existing circumstances, to eliminate the conditions contributing to the criminal activity.”

The Plaintiffs have a claim against the individuals who attacked them. But it is hard to find a lawyer in Baltimore who will take a case against individuals without insurance because of the difficulties in collecting money, even if the Defendants have money to satisfy a judgment. I learned this the hard way after bringing a case against an NFL punter with the Carolina Panthers (now with the Denver Broncos). This Defendant had millions of dollars in assets. Eventually, we did collect, but it took a few years.

The moral of this story is absent unique circumstances, there has to be a deep pocket to justify bringing a claim. If an attorney thinks he or she will have problems collecting on a judgment, it is probably not a case worth taking.

Cases You Want to Read on Negligent Security in Maryland