If you cannot make progress with an insurance adjuster, and the problem is something other than the valuation of the case, I’d ask to speak to the adjuster’s supervisor. (If the problem is the valuation of the case, whining about the offer is useless. File suit.  Get on with it.) I settled a relatively minor car accident case with USAA yesterday. We thought it might be a larger case but the client, thankfully, had a great recovery. We sent USAA a demand package. After a great deal of nonsense, and a lot of phone calls to the adjuster that went unanswered, we got an offer four months later that did not include the client’s lost wages. 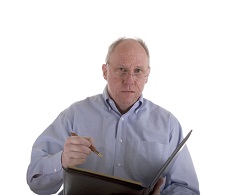 I assume every insurance adjuster I don’t meet looks like this guy, right down to the expression.

The initial offer was awful, but I’m not even mad about that. After squaring away the medical/health insurance liens and talking to the client, I made a counteroffer by voice mail. No response. I kept calling. Finally, I get this whining adjuster on the phone who blamed all of his problems on someone or something else and inexplicably began every sentence with, “Well [long pregnant pause], let’s just say….” Finally, the adjuster tells me he is going to “drop everything” and get right on getting us a counteroffer on a case that he had ostensibly already evaluated. He also agrees the lost wages should be included. He never calls back. I called him that night and left a message. A few days go by and I call and try to get his supervisor. Another USAA adjuster – a very nice woman – intercedes and makes me a counteroffer. I get a counter demand from my client and call back again. Same deal. No response. I call the adjuster’s supervisor and, after sitting on hold for 5 minutes (I have a timer on my phone), she picks up. Now, the supervisor knows if you are asking to speak to her, you are the typical jerk personal injury lawyer who is only complaining about the amount of the offer. This is not a rebuttable presumption type of assumption by the supervisor. It is set in granite. (This happened last time I tried to get USAA to admit that the collateral source rule has been in effect in Maryland for the last 113 years). Ignoring this iceberg in my path, I turn the boat north and speed up, trying like crazy to lay the sweetness extra thick to refute the supervisor adjuster’s assumption that I am John Edwards’ even more evil twin. I brilliantly praise other USAA adjusters that she knows to establish my “I’m not crazy” bona fides.But I get nowhere with her. This woman has the cheerful good humor of a corporal in the North Korean army. She interprets everything I say as commentary on the offer itself, further cementing my “supervisors can’t break their assumption it’s only a matter of money” hypothesis (which I think we can now bump up to theory status).  I mean,  it is about the money, ultimately.  But I’m also talking to the adjuster for a larger reason.  As much I hate insurance companies, we need to work together to quickly figure out those cases we can settle before trial and those we cannot.  Otherwise, our clients face delays in getting their money that may be unnecessary. Anyway, let’s go back to the story. With everything else going in one ear and out another, we get to the money. After a lot of haggling and what I think was good tactics on her part (“That won’t work, tell me is the lowest amount you would recommend to your client?), she increases the settlement offer substantially and tells me it is a final offer. I tell her that I will have to talk to my client, that I don’t have the power that she does because I have someone, a client, making the call. She eats this up calling herself “the lady with the money“, which she repeats, seemingly for herself as much as me, for effect. The client accepted the settlement offer. A six-month ordeal that could have been, and should have been, resolved in a month.