A lawyer at DeCaro, Doran, Siciliano, Gallagher & DeBlasis, a good Bowie law firm that we have a good deal of respect for that does a lot of insurance defense work, got a speeding camera speeding ticket in Montgomery County. He decided to fight it. The basis? He found a typo, a “(b)” instead of a “(d)” in the Montgomery County law dealing with speed cameras. He won.

The news media is eating this up, and it sounds like the lawyer is too, proudly giving interviews around town. This is the response from one commenter on ABC-7’s website:

And you are exactly the reason why people hate lawyers, Mr. Liskow. Thanks for nothing. You know, of course, that the State Legislature is just going to amend the law, right? So for your paltry $40, you have cost, and will cost, the State’s taxpayers thousands and thousands of dollars and (wo)man- 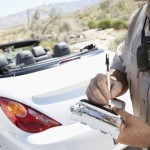 hours to change a one letter typo in one subsection of one law, the violation of which you know full well that you were guilty of. News flash, genius: except for the defendant, nobody likes it when people get off on a technicality. Here’s hoping that karma bites you HARD.

I wouldn’t say it quite that harshly. But I share much of the commenter’s sentiment/view. Just because you can beat a charge does not mean you should. I also agree this is what cements the reputation of lawyers in the eyes of many. Personally, I think the right thing to do is defend the case on its merits or pay the lousy $40.

I’m told by unconfirmed confidential sources (read: random gossip) that the lawyer is giving interviews at his office at DeCaro, Doran. This is a good firm with a real reputation to protect, and our lawyers respect them. They don’t seem to shy away from the story. I really wonder if the firm is putting this out there proudly or whether it is digging its chin into its chest waiting for it to pass.