What is the settlement value of a knee injury case? Below we discuss the average and median settlement amounts of these knee injury claims.  We also list more statistics, relevant medical literature, and the importance of expert testimony.

Our lawyers have successfully handled scores of serious knee injury cases, including a $5.2 million verdict in a knee injury case. We fight for our clients. Call (800) 553-8082 or get a free online consultation. If you need a lawyer in another state outside of Maryland, we can help you find the best lawyer for you.

What Is the Average and Median Knee Injury Settlement?

According to a Jury Verdict Research study on knee injuries:

Secondly, half of the cases in the study were car accident lawsuits and the other half were all other lawsuits. In Maryland, by contrast, around 75% of knee injury cases are from car accidents. We have fewer premises liability cases due to our contributory negligence law.

JVR does not provide the average accident knee injury verdict in motor vehicle collision cases. However, the median is probably more illustrative. The median knee injury verdict in a car accident case is $94,406. Interestingly, the middle 50%—the 25th to the 75th percentile—ranges from $26,255-$216,726. That is a large range, and the bottom quartile is likely made up of minor injury cases.

What Do Knee Injury Verdict Statistics Tell Us?

Motorcycle accidents and pedestrian crashes often involve the most serious knee injuries.  But it is amazing how many motorcycle accident lawsuits involve contested liability. For whatever reason, juries don’t like motorcyclists. This is unfair, but good counsel can overcome the challenge.

Remember that worker’s compensation cases have an entirely different, lower output formula to calculate the value of knee injuries that happen on the job.

The average compensation payout for rear-end collisions is lower because the mechanism is less severe in these car accidents.  Many knee injury claims from rear-end accidents are based on preexisting injuries. Our lawyers have found that preexisting injuries are the toughest cases to bring and generally have lower settlement amounts.

Additionally, there are few serious “knee injuries only” injuries in rear-end car accidents. If you hurt your knee badly in a rear-end accident, chances are you have additional injuries that are also serious. 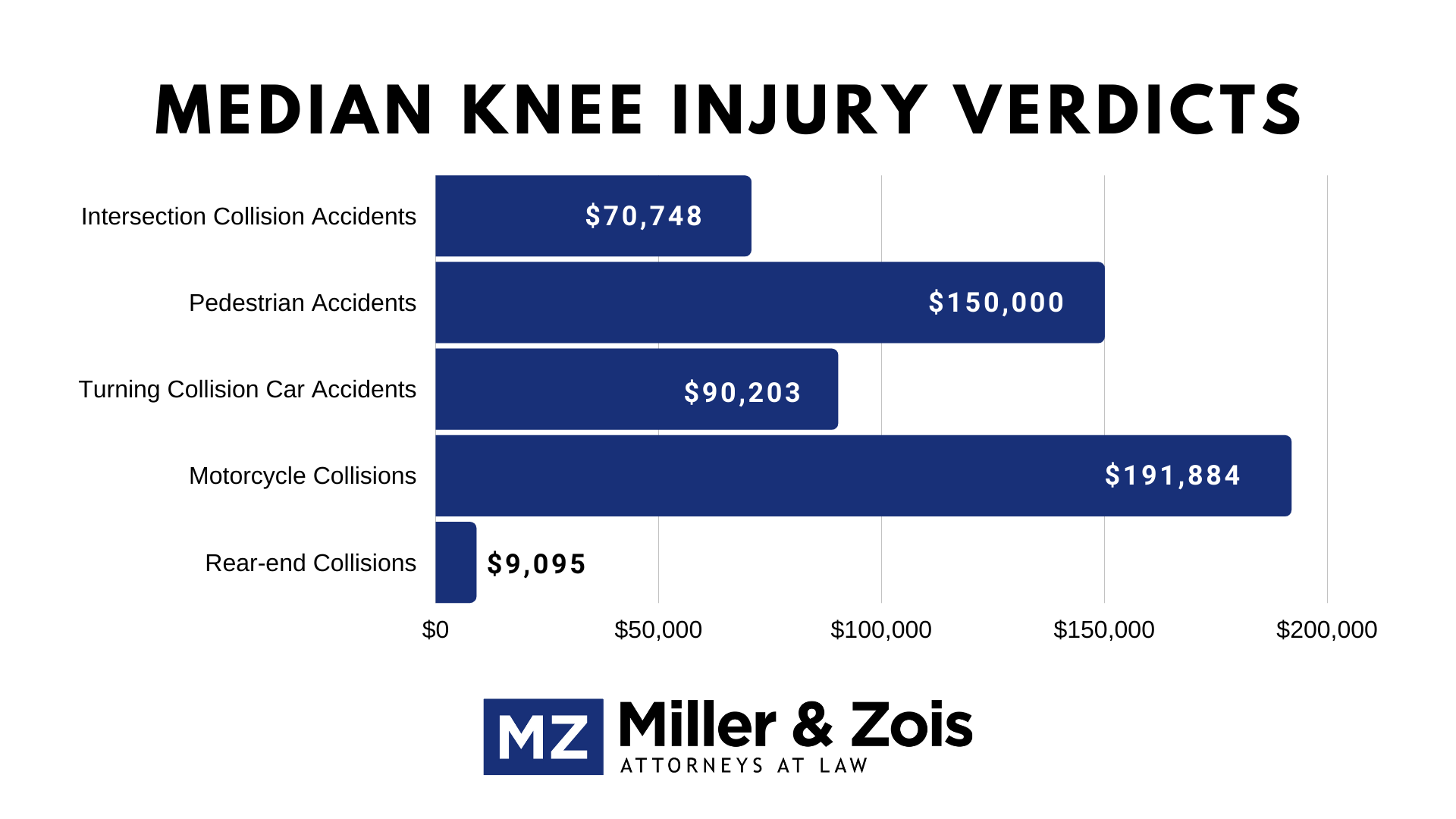 The treatment and prognosis of knee injuries have evolved as much as any other traumatic injury over the last 10 years. There is a greater understanding of the knee’s mechanics. New technologies allow doctors to better diagnose, treat, and understand the long-term consequences of knee injuries.

What Is the Biggest Factor in That Drives Settlement Amounts in Knee Injury Claims?

The biggest factor that drives knee injury case values is whether there was a surgery. I don’t have statistics on this. But our lawyers universally find compensation payouts higher in knee surgery cases.

These improvements have consequences in the legal sphere. A medical expert’s explanation of the function of the knee joint and the effect the injury will have on the patient is a critical component in how much a jury will award if the case goes to trial.

The expert—an unbiased treating doctor, in a perfect world—needs to take the jury through the x-rays, CAT scans, MRI studies, and the arthroscopic examination of the surfaces of the involved bones.

This is significantly easier in knee fracture or dislocation cases. Instead, many serious knee injuries are soft tissue injuries involving one or more of the non-bone structures of the knee. In car and truck accidents, these injuries often occur when trauma to the thigh or shin bone is accompanied by an opposite force directed against the foot. The result is torque is violently transmitted to the knee.

You need a qualified expert to explain why a soft tissue knee injury can be serious — a heart attack is also a soft tissue injury — and how it is an injury that can haunt a patient for the rest of their lives.

The expert must articulate all the long-term effects. The defense expert will have some song and dance about how degenerative changes like arthritis would have occurred even without the crash because of the normal aging process. Our experts need to confront these defenses head-on before they gain currency with the jury. In most cases, science, and medical records are on our side. 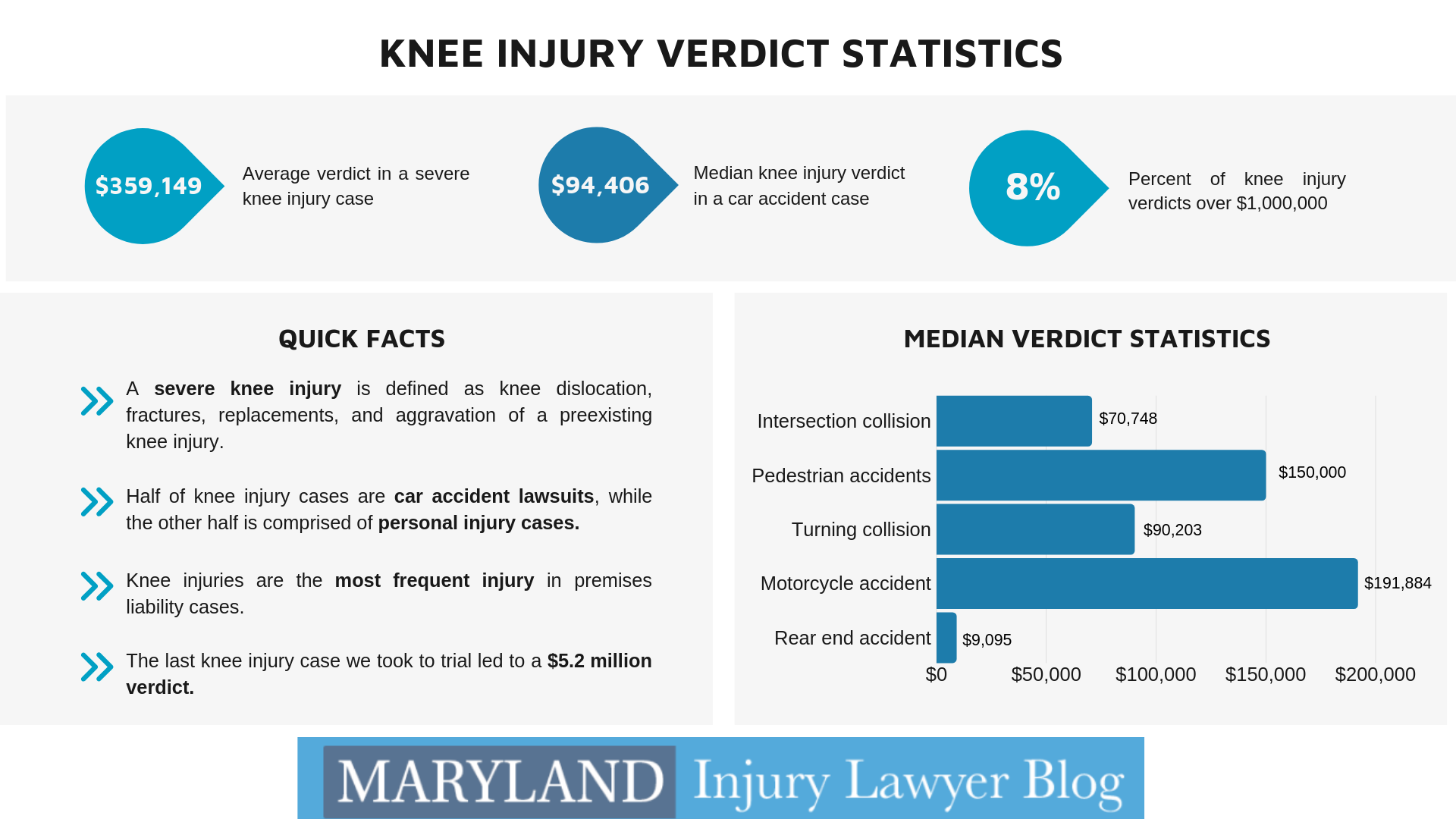 What Key Medical Studies That Come Up in Litigation?

These are some leading articles from the medical literature discussing traumatic knee injuries that experts sometimes rely upon (directly or indirection) in knee injury litigation:

How Can I Get a Great Lawyer for My Knee Injury?

If you need a car accident lawyer in Maryland —one who understands the science of the knee—to get you the money damages you deserve, call Miller & Zois at (800) 553-8082, or get a free, no-obligation case evaluation online.