When picking a jury, peremptory strikes are a big deal. There are almost invariably a few prospective jurors high on the roll call that you just know are anti-plaintiff. I don’t know how I know this – you get just a glimpse of Maryland jurors in voir dire – but I just do. They have this indescribable “I assume the plaintiff’s case is garbage and I can’t believe I’m here” look. Defense lawyers have a similar fear. They are terrified of the “I can feel your pain to where I’m able to set aside logic and reason” look. Both these jurors get rooted out by peremptory strikes. And the “look” is fair game as long as it is not based on race, religion, or gender. In Maryland, you get four peremptory challenges plus one peremptory challenge for each group of three or less alternate jurors to be impaneled. So you get 5 strikes.

Maryland car accident lawyers on both sides of the aisle now assume that Maryland law, after Maurer v. Penn National, is that if an uninsured motorist insurance company waives its subrogation interest in a case when the at-fault driver offers her policy limits, that insurance company cannot contest liability at trial. 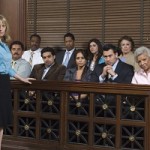 Plaintiffs’ attorneys in Maryland disagree whether this is a good rule. The problem with the rule for plaintiffs is that insurance companies are less likely to waive subrogation when the underlying insured offers policy limits. This means you have to deal with two sets of defense attorneys, which means almost twice the hassle. Insurance companies are also doing side deals now, where the underinsured motorist carrier waivers subrogation on the DL (that’s “down low” if you were not cool ten years ago), presumably with a pinky promise.

What does this have to do with jury strikes? Well, defense lawyers try to parlay this double lawyer albatross into double strikes. Can they do this? Maryland Rule 2-512 (h) says that multiple plaintiffs or defendants should be considered a single party unless the court finds that “adverse or hostile interests between plaintiffs or between defendants” justify separate challenges.

In uninsured and underinsured motorist cases, it is hard to claim that the interests of these parties are anything other than the same. But I got broadsided with this argument a few years ago during a trial in Baltimore County. It was a tough case anyway; I was in Baltimore County and, over strenuous objection, both the at-fault driver and the underinsured motorist carrier (MAIF and GEICO) were given strikes. I don’t have to tell you how it turned out: awful. (Yet still, it was more than the settlement offer which summarizes dealing with MAIF and GEICO).

We appealed the case and the Maryland Court of Special Appeals reversed in our favor on other grounds, and the case ended up settling for more than twice the verdict. So the court never got to the issue of these strikes. But I’m sure we would have won on that issue too, not only because the defendants’ interest was not adverse, but also because the trial judge did not require the at-fault driver and GEICO to meet their burden of showing the existence of adverse and hostile interests as required by Maryland Rule 2-512.

The take-home message is that you need to have this rule handy in the event this issue arises, and also preserve the jury strikes that both parties make – which is not included in the court record – in the event the whole “whether the error caused prejudice” issue arises.